Lives Lost to Covid-19: A man of faith with a fantastic sense of humour 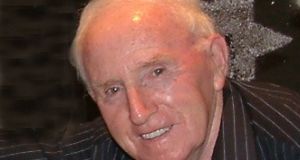 James Cleary believed in the power of prayer, and his faith was unshakeable.

“That sense of anything is possible never left him,” say Philomena Cleary of her father-in-law, James (Jem) Cleary, a worker with the Irish Glass Bottle Company who, along with four friends, cycled to Rome in 1950, the year Pope Pius XII invited all Catholics to visit the city to celebrate.

The story of the epic trip was the “greatest story” of a born storyteller, she says. James and his friends cycled through a continent still ravaged by war, often having to cycle for miles to find a crossing over a river because the bridge they had planned to cross had been blown up during the fighting, and had yet to be replaced.

“This arduous cycle pilgrimage involved visiting a church every day, and never taking a short cut. They finally reached Rome where they were rewarded, so he says, by a medal from the Pope.”

Shelbourne FC courted him at one stage, but he turned them down saying, “I only play for sport”

James was born in Ringsend, Dublin, in December 1926, to Mary and Philip Cleary. He lived with his five brothers and three sisters under the shadow of Ringsend church, and worked on deliveries for the nearby Irish Glass Bottle Company. A talented footballer, he scored many goals for the company football team. Shelbourne FC courted him at one stage, but he turned them down saying, “I only play for sport.”

The couple lived first in Howard Street, Ringsend, and later moved to Derrynane Gardens, Sandymount. After he retired, Jem walked every day along the Dodder to Ringsend church, or headed up Bath Avenue to Haddington Road church for Mass. He believed in the power of prayer, and his faith was unshakeable. He also had a “fantastic sense of humour”, says Philomena.

In more recent years “the curse of dementia” crept into James’s life, and in November 2018 he entered TLC Nursing Home in Maynooth. The move caused heartbreak to the family but James took it with characteristic grace and good humour, says Philomena. He was well cared for.

On March 8th, 2020, James’s son Paul said goodbye to his father after his usual visit not knowing that this would be the last time he would hold his dad’s hand. The next day, the nursing home was locked down to visitors. Soon word came through that James had contracted Covid-19. Having spent two weeks keeping a vigil in the car park outside his bedroom window, with a little candle lit on the windowsill, and playing his favourite André Rieu tracks through the window, the family finally had to say goodbye to him at 5pm on April 30th, 2020.

“His wife, Marie, herself on oxygen, had just arrived in her wheelchair for her daily 15-minute window visit, when he took his final breath and bid us slán agus beannacht.”