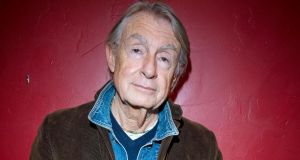 Joel Schumacher in 2010. He started out as a costume designer before writing screenplays and becoming a film-maker. Photograph: George Pimentel/WireImage

Joel Schumacher, who has died aged 80 of cancer, took the less travelled path from costume designer to film-maker. As a director, the style and swagger of his snazzy hits often helped conceal some unsophisticated needlework. He was an opportunist rather than a visionary – a “pop culture sponge”, as he put it in 2000, adept at capitalising on a craze, from disco movies in the 1970s to superhero extravaganzas in the 1990s, when he took over the Batman franchise for two films.

“I’m not embarrassed about anything I’ve done,” he said in 1993, though admittedly this was before Batman and Robin (1997), which he cited as the closest he had come to selling out. He apologised for that film in 2017, though not for controversially adding rubber nipples to the hero’s breastplate both here and in Batman Forever (1995). “Maybe I was just naive but I’m still glad we did it.”

He first found success as a director with St Elmo’s Fire (1985) and the horror-comedy The Lost Boys (1987), both full of young stars (known as “the Brat Pack”), flashy pop-promo visuals and big hair. He later oversaw a brace of John Grisham adaptations: The Client (1994), impressively paced and with standout performances from Susan Sarandon and Tommy Lee Jones, and the more hysterical A Time to Kill (1996), which made Matthew McConaughey into a leading man.

Schumacher was quite the star-spotter, nabbing Julia Roberts for two films – the supernatural thriller Flatliners (1990) and the tearjerker Dying Young (1991) – while she was in the foothills of her career, and putting the 24-year-old Colin Farrell centre stage in the Vietnam drama Tigerland (2000). He likened casting to falling in love: “Someone walks into your office and you go, ‘How did I live without this person?’”

His most interesting film by a long chalk was Falling Down (1993), set over the course of one sweltering day in Los Angeles and starring Michael Douglas as a white-collar outcast who believes he has been abandoned by a devalued, multicultural America. Surprised to see his son pilloried for the role, Kirk Douglas spelt out what was obvious to most viewers: “Michael is playing the villain.”

This level of moral ambiguity was not what anyone was accustomed to from a Schumacher film; Warner Bros had even balked at his request to direct it, telling him: “You’re too nice to do this movie.” His visual sense, though, proved as acute as ever. Right from the claustrophobic traffic jam in the opening sequence, punctuated by close-ups that render innocuous details melancholy or menacing, he made the film and its audience sweat.

He was born in New York to Francis Schumacher, a soda fountain worker studying to be a pharmacist, and Marion (née Kantor), who worked in a dress shop and raised him after Francis died from pneumonia when Joel was four. As a child, he built his own puppet theatres and dressed shop windows in his neighbourhood. He was educated in the city at the Fashion Institute of Technology and the Parsons School of Design. He also sold men’s gloves at Macy’s, which led to a window-dressing job there and at Saks Fifth Avenue.

Most of the 1960s, he claimed, were spent in a state of dazed debauchery. He had already gone off the rails at a young age, taking his first drink at the age of nine, smoking at 10, having sex at 11 and using drugs from his early teens. He later estimated that his lifelong tally of sexual partners was in the low five-figures. “I was someone who went to a party when I was 11,” he told People magazine, “and got home when I was 52.”

His most intense period of drug-taking coincided with his mother dying in 1965. For the next five years, he injected liquid methedrine and took acid thousands of times. Nevertheless, he managed to co-found the Manhattan clothes boutique Paraphernalia as well as landing a designing job at Revlon.

In 1970, he kicked his intravenous drug habit, burying his syringes in Central Park, and hustled his way into work as a costume designer on a handful of films. These included the futuristic comedy Sleeper (1973), directed by his friend Woody Allen, whom he credited with his next career move. “Woody told me to write,” he said, “so I wrote scripts on spec and they sold.”

There was a black musical emphasis to his screenplays Sparkle, loosely based on the story of the Supremes, Car Wash (both 1976) and The Wiz (1978), which starred Diana Ross and Michael Jackson in an adaptation of the all-black Broadway version of The Wizard of Oz.

After directing two TV films, Virginia Hill (1974) and Amateur Night at the Dixie Bar and Grill (1979), the latter showcasing his flair for ensemble casts, Schumacher made his big-screen debut with The Incredible Shrinking Woman (1981), starring Lily Tomlin in a comic update of the 1957 science-fiction favourite The Incredible Shrinking Man. He returned briefly to his comfort zone with DC Cab (1983), released in the UK as Street Fleet, which had a predominantly black cast and a disco soundtrack.

He worked with Farrell again in the snappy thriller Phone Booth (2002) and Veronica Guerin (2003), starring Cate Blanchett as the murdered Irish journalist, and made a version of The Phantom of the Opera (2004) with Gerard Butler in the title role. His last directing credits were on two episodes of the Netflix drama House of Cards in 2013.

Reflecting on his reputation as a loving director, he said: “When people say that I am so giving to every single person on a movie set, I think it’s because I also need something from them. In many ways I’m still a poor, lonely kid with the whole neighborhood going on around him, and I’ve got to be a part of it. And the way to do that is to get people to like you.” – Guardian