Carmel Callis obituary: ‘A wonderful voice which brought joy to everyone’

Lives lost to Covid-19: Carmel loved her job and if people were working late she would buy bread and meat and make them sandwiches 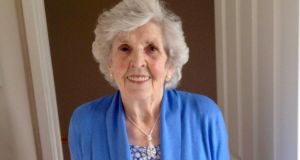 Carmel Callis: “When it was no longer possible to attend the choir Carmel continued to sing every day at home”

Music was a big part of the life of Carmel Callis (nee Feehan), who died of Covid-19 in St James’s Hospital, Dublin, on March 29th.

Carmel was born on July 11th, 1929, on Kevin Street, Dublin. Later her parents, James and Mary Feehan, moved to Larkfield in Kimmage, where they lived for several years before settling on Cashel Road in Crumlin.

One of a family of nine children, Carmel had a great love of music, and a wonderful voice, says her daughter Maria. As a teenager Carmel joined the Corey Choir in Inchicore, where she met the renowned Irish tenor Dermot Troy, who became her friend and sang at her 21st birthday party.

She joined a minstrel troupe called The Merry Dixielanders as their principal female singer, and they played at venues all over Dublin. “They would sometimes rehearse in the front garden of Cashel Road,” says Maria. “A free concert for the neighbours.”

It was while working at the Irish Art Plaster Company in Irishtown that Carmel met her future husband Harry Callis. The company made statues for churches. Harry was a statue caster, Carmel was in the painting department, and the company’s statues could be seen in churches around the country.

“Everyone cycled in those days, and their romance blossomed when Harry repaired a puncture on Carmel’s bicycle. He insisted on cycling home with her despite it being miles out of his way to make sure the tyre didn’t go flat again.”

Carmel and Harry married on April 3rd, 1956, and soon afterwards settled in Ballyfermot, where they raised four children; James, Declan, Maria and Kieran. They lost a son, John, shortly after his birth in 1958.

At first Carmel was a stay-at-home mam, and she was a wonderful home-maker and cook, says Maria. Later she had a part-time evening job as a cleaner in the ICS Building Society in Westmoreland Street. She loved the job and if people were working late when she arrived to start work she would go out and buy bread and meats in a shop and make sandwiches for them. She became a permanent member of staff and was the official tea lady until she retired in 1988.

Carmel’s love of music never left her. She continued to sing in those early days in Ballyfermot, at ballad sessions in the local church hall, and later she became a member of the choir in the Church of Our Lady of the Assumption in Ballyfermot. Later again she joined the Memory Lane Alzheimer’s Choir in Crumlin, along with Maria.

“When it was no longer possible to attend the choir Carmel continued to sing every day at home,” says Maria. “It was her greatest joy and a joy to everyone who heard her. She never lost her wonderful singing voice.”

Carmel and Harry had a wonderful marriage full of love and respect, and had been married for 58 years when Harry passed away in January 2015.

Carmel lived out her days at home in Ballyfermot. She contracted Covid-19 on March 23rd, and was taken to St James’s hospital on March 28th, where she died the following day.