Michael Harding: A mask simply wipes the smile off any human face

It’s like being on a leash. Surgical gloves, queuing rules and social distancing all restrict you 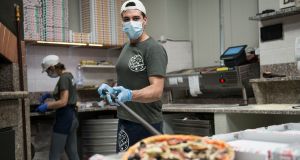 Pizzeria: I stood at the door and chose a Vesuvian pizza because the menu described it as hot like a volcano with lashings of chilli flakes. Photograph: Stefano Guidi/Getty

Another few days and my isolation will be over. Even already I’m itching to get out. I went into town at the weekend for a pizza, thinking that a bit of Italian culture would cheer me up. I stood at the door and chose a Vesuvian pizza because the menu described it as hot like a volcano with lashings of chilli flakes.

A Garda car stopped close by and a young man in uniform walked towards the restaurant door. I was worried he might ask me what I was doing; such is the nature of the lockdown that I have become very obedient to the authority of police. But he was only collecting his own dinner.

And because he had phoned earlier it was ready and he went inside ahead of me, picked up his parcel and walked back down the street to his colleague in the patrol car.

When mine was ready I paid with a contactless card and went down to the river, where I sat on a bench to enjoy my meal. That’s when I realised that the box contained a Hawaiian pizza; pineapple slices and slivers of ham.

On another bench a woman wearing a black mask was holding her face up to the sun, as if she were meditating or praying and I may have disturbed her serenity; because when I didn’t find my volcanic pizza in the box I wasn’t a happy punter, and I let loose a string of expletives.

I was so demonstrably frustrated that she asked me was I all right.

“I’m really disappointed with this pizza,” I declared.

She stretched to see into the box.

“It’s Hawaiian,” I pointed out.

“And what’s wrong with that?” she wondered.

“Hawaiian!” I repeated, as if the concept was deeply offensive.

“Who could possibly invent a pizza with pineapple?” I wondered, as if she was to blame.

“Probably Americans,” I suggested. “Pineapple on a pizza is simply uncivilised.”

She tried to suggest that Canadians might have been the culprits, but I wasn’t listening.

“As a matter of fact,” I continued, “I believe some politicians in Iceland are in favour of banning pineapple as a pizza topping entirely. That’s how seriously they take this issue.”

She arched her back and raised her eyebrows, and as she was wearing a mask I didn’t realise how annoyed she was until she pushed the cloth below her chin and spoke again.

“My sister lives in Australia,” she said, “and they love Hawaiian pizzas down there.”

It was only when she had gathered up her phone and walked away that I realised it had been a mistake to share my feelings with her. There’s something about a face mask that gets in the way. It’s impossible to read other people’s faces and it’s impossible for them to read mine.

In self-isolation I had neither problems nor worries. The garden was my universe. I was like a cloistered nun, enraptured in silence and solitude. I had almost no choices, yet the restrictions led to a sense of deep serenity. I felt grateful just to be alive, and I never even thought about pizzas.

In fact if someone had arrived at the house and thrown a Hawaiian pizza in the window I would have been delighted. Because in lockdown I learned to take what I got and be grateful from one day to the next for whatever turned up.

But now my desires are mounting. My longings for beaches and coffees at roadside restaurants are all returning. Already I’m missing the silence and the birdsong, the slow mornings, the long evenings and the moonlight at night.

I’m on the verge of charging towards the Atlantic coast in a campervan like a demented Don Quixote, but I don’t feel entirely liberated. I feel as if I’m on a leash. Surgical gloves and social distancing and the regulations about queueing will all restrict me. And without sustained conversation with strangers in various filling stations I’m terrified that there will be no more fun or banter on the road. Because a face mask simply wipes the smile off any human face.

But at least I have avoided the disease so far. While hundreds have died, and thousands have had their lives ruined by ill health, I am still alive.

So I’ll wear the mask, and adhere to social distancing, and wash my hands as often as is necessary. Because I’m hugely grateful now for the wonderful gift of still being here.