Lives lost to Covid-19: Gifted craftsman and father of five also had a passion for history 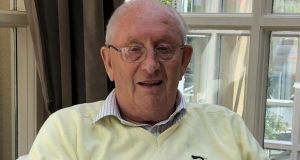 Joe Coffey: when anyone inquired if he was having a good day, he would reply “I enjoy every day”.

It would not be an exaggeration to say that a highlight of Joe Coffey’s long life was attending the famous Munster win over the All Blacks at Thomond Park in 1978. He loved sport, especially if Limerick or Munster were playing, whether that be in rugby, hurling or soccer.

Back in the 1960s and 70s he was very involved with the Community Games and co-managed the local soccer team in Greystones, off the Ennis Road in Limerick. This included bringing players to games.

“It was amazing how many footballers you could get into a Ford Escort Estate in those days,” says his son John.

He played golf and in retirement was a member of both Kilrush and Kilkee Golf Clubs. Joe enjoyed summers in Kilkee, swimming at Byrnes’s Cove, golfing with the ‘seniors’, or walking along the West End. He was also an enthusiastic supporter of Kilkee Civic Trust, their annual Arts in Focus evenings and countless music events. He loved music and books as much as sport, and had a passion for history.

Born John Joseph Mary Coffey at St Mary’s parish Limerick in June 1935, he was the only son of Jack and Lily Coffey. He had two sisters, Mary and Helen. After school he served his time as a fitter and turner in Shannon Foundry before spending 35 years with Irish Cement in Castlemungret.

Gifted with his hands, Joe spent endless hours in the workshop at the end of his garden in Greystones. He became a master model boat builder in his retirement.

In those final years he was affected by dementia but he still enjoyed music and was known for his sayings. Favourites were “Deo Volente” (God willing), “go n-éirí an bóthar leat” or his version of “If I had a head of cabbage I would split it in two. The leaves I would give to many but the heart I would give to you”.

A typical response from Joe, when anyone inquired if he was having a good day, would be “I enjoy every day”.

On May 3rd last Joe died with Covid-19 at Nenagh General Hospital in Co Tipperary. A man of strong faith, it was particularly sad that he was deprived of a Church funeral due to current restrictions.

His family are most grateful to all who looked after him at the Ennis Road Care Facility, at University Hospital Limerick, at Nenagh General Hospital, as well as to Thompson Funeral Directors in Limerick.

When dementia started to take its toll Joe’s last remaining song was `If I was a Blackbird.

“If I was a blackbird/I’d whistle and sing/And I’d follow the ship/That my true love sails in,/And on the top rigging/I’d there build my nest..”