Global carmakers race to lock in lithium for electric vehicles 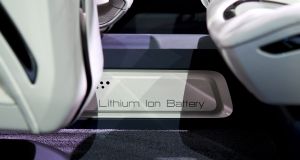 As Nissan and Mitsubishi Motors rolled out their electric cars for the mass market in 2010, Japanese manufacturers placed enthusiastic bets on a surge in battery demand. But the electric vehicle revolution failed to materialise and much of their investments went sour.

Nearly a decade later, China and other governments are driving a massive push for a future of electric cars as they try to shift consumers away from combustion engines.

To capture the market for these vehicles, global carmakers from Volkswagen to Tesla are attempting to lock in supplies of raw materials that are needed to increase production of lithium ion batteries, which will power this electric revolution.

Indeed, electric vehicle supply in China is expected to be one of the main drivers of global demand for lithium. By 2030, Goldman Sachs expects China to supply 60 per cent of the world’s electric vehicles, up from 45 per cent in 2016.

However, the problem for all carmakers is that none of them have “proper long-term contracts” for supply of lithium, according to Simon Moores, founder of London-based Benchmark Minerals Intelligence.

Milan Thakore, an analyst at Wood Mackenzie, adds: “I think a lot of car manufacturers are almost panicking, in the sense they want to make sure they don’t miss out on the essential materials they need for the battery.”

The fears are particularly pronounced in Japan, once the undisputed leader in rechargeable battery technology.

While Japan’s Panasonic remains the world’s biggest supplier of car batteries, China is now home to two of the world’s top five suppliers of lithium batteries - CATL and BYD.

Backed by aggressive government policies and subsidies for electric vehicles, Chinese manufacturers also control between 50 and 77 per cent of the market for four of the key components - cathode materials, anode materials, electrolyte solutions and separators - used in lithium ion batteries, according to Yano research Institute.

Lacking the financial firepower of government-sponsored Chinese rivals, Japanese carmakers have traditionally relied on homegrown tie-ups with trading houses, battery makers and materials suppliers to resolve any shortage in resources.

But with competition growing globally, Japanese carmakers can no longer resolve shortages in resources through using domestic materials makers alone as they are too stretched and under pressure to supply overseas groups.

“Their [Japanese material makers] clients will be all over the world,” says Noboru Sato, a visiting professor at Nagoya University and a former executive of battery supplier Samsung SDI.

“While Japanese companies may say they can compete with technology, it’s going to be the investment capacity that will be a critical factor for future competition in batteries,” he adds.

This has prompted some Japanese groups to try to move away from the homegrown model, which has traditionally relied on domestic battery technology that was deemed to be higher in quality than that offered by Chinese groups.

For example, Nissan last year offloaded its battery business with Japan’s NEC to a Chinese private equity group, GSR Capital, as it sought to boost its cost competitiveness.

Toyota is also trying to take the initiative, albeit through the traditional model. In January, its trading arm agreed on a $224m deal to take a 15 per cent stake in Orocobre, an Australian company that produces lithium in Argentina.

Additionally, the company has taken steps to strengthen its relations with domestic suppliers as it plans to launch electric vehicles in China and India from 2020.

Significantly, it has deepened its partnership with Panasonic in an effort to accelerate commercialisation of solid-state batteries, which can hold higher power and charge in less time than conventional lithium ion batteries.

Elsewhere, Germany’s Volkswagen has launched a tender for five years’ supply of cobalt, although it has struggled to find any takers.

This month, BMW said it was close to signing a deal for the long-term supply of battery metals lithium and cobalt, while Tesla is also in talks with Chile’s SQM, one of the world’s largest lithium producers.

For their part, Chinese companies are also increasing their investment in lithium producers.

“Establishing control over raw materials can provide the supply chain security that China needs to meet its ambitious EV targets, and may also allow it to scupper the progress of other players,” he says.

RWR Advisory recorded more than $1bn in transactions for lithium mines by Chinese companies - particularly car companies and car supply companies, up from zero in 2016 and $178m in 2015.

Among the deals, Chinese carmaker Great Wall Motor signed an agreement with Australian lithium miner Pilbara Minerals to secure supply of the metal for five years.

China also dominates the supply chain for cobalt - the battery material of top concern for carmakers as more than half of the world’s supply comes from the unstable Democratic Republic of Congo, raising fears among carmakers over security of supply.

However, despite the initiatives, there are nagging concerns among some groups over whether companies should move rapidly towards locking in raw materials deals as the price of lithium and cobalt rises dramatically.

“Carmakers may need to secure raw materials themselves if they become desperate for lithium ion batteries, but it remains unclear whether electric vehicles will really take off and batteries will evolve,” says Maki Sekimoto, director at the metals research division of state-run agency Japan, Oil, Gas and Metals National Corporation.

“It’s a headache for the industry that there are too many uncertain pieces that make it difficult to make a definitive call on which direction things will go.”