Opel revives its GSi menace with a hot Insignia

At €50,000 the Insignia GSi represents the firm’s performance rival to high-end premium alternatives 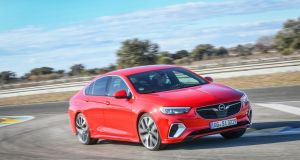 Anyone who grew up in the 1980s with an interest in cars will remember the wheel spin and tyre smoke from Opels adorned with the GSi badges. It was the moniker used to challenge the likes of the Volkswagen GTis and Ford’s XR range and the recipe was to load cars like the Kadett GSi with more power than equivalent rivals in the hope that most of it would reach the road somehow. Invariably it largely let to a lot of burning rubber.

Well the GSi is back, this time in the guise of a high performance version of the good-looking - if under appreciated - Insignia. And to make sure more of the power transfers to the tarmac it’s an all-wheel drive set-up.

The new Insignia GSi has been developed on the road and test track and the result is alarmingly civilised. Yes there is excitement to be had but you have to deliberately provoke it.

To help get the power down to the road the latest GSI comes with all wheel drive, a 10mm lowered ride height and loads of clever electronics to assist staying on the chosen track. Opel’s marketers call the new GSi ‘the grip master’. It’s a brave boast that can be easily caught out but, for once, they’re not far off the mark.

Under the bonnet there is a choice of two Euro 6 emissions compliant four cylinder engines that are quite different in character. The petrol 2 litre is turbocharged and produces 260hp and 400nm. Petrol power would always be the enthusiast’s choice due to its revy nature but Opel Ireland feels the diesel GSi will still sell well. Diesel is the obvious fuel choice for long distance cruising.

The diesel power comes from a 2 litre (1956cc) bi-turbo that pushes out 210hp and a whopping 480nm. Opel has nicknamed the diesel ‘the torque master’ as the full 480nm of torque is available from just 1500rpm. The diesel features balancer shafts so it is smooth. The bi turbo delivers great grunt and is no slouch on the open road. As you’d presume the petrol version is quicker than the diesel with a top speed of 250km/h and a 0-100km/h time of 7.2 seconds, compared to the diesel’s 7.9 seconds.

Those emissions figures do mean the petrol will set you back €1,200 a year in motor tax, however.

Four piston Brembo sports brakes with big 345mm front discs, do a good job of scrubbing off speed. The Sports Tourer is roughly 30kgs heavier than the Grand Sport saloon and perhaps a better looking car. All in the car weighs over 1,700kgs, whic impacts on its outright performance from 260bhp in petrol guise.

Our cars were shod with Michelin’s Pilot Sport 4S tyres wrapped around impressive 20 inch bi-colour alloys. On looks alone the GSi promises a high level of grip. Traction is delivered through what Opel calls its ‘Dynamic Twinster’ torque vectoring system. Active torque vectoring is nothing new but the latest version features and does an excellent job of keeping you going in the right direction especially when cornering with gusto.

The GSi drives in a nice, fluid way with effortless controls. The driver really has very little to do to make swift progress. The all wheel drive setup draws no attention to itself and can shift drive between the axles unnoticeably in a heartbeat.

If needed the GSi can deliver up to 60 per cent of its engine power to the rear wheels. The suspension is adaptive and Opel’s ‘Intelligent FlexRide’ system helps deliver a number of cars in one with touring, normal and sport mode settings. A new 8-speed auto with steering wheel paddle shifts is standard too. The steering’s feel has been improved to give better centre feedback although I found its power assistance a little too light.

As with many performance cars, the Insignia GSI was fine tuned on the famous Nürburgring-Nordschleife track in Germany with ring legend Volker Strycek (97 wins there) leading the team. Further testing was carried out Michelin’s Salon-de-Provance and Fontange proving grounds.

Our driving fun took place at Fontange, where we were let loose to do some dynamic testing and high speed laps on the seven km track. The GSi’s wide track and large footprint allows the average driver have a lot of fun exploring the car’s limits securely - even when driving well beyond their talent. On the beautiful country roads around the track the GSi consumed the kilometers with ease. Through the sound system the cars engine note is artificially amplified depending on drive mode selected to add to the sporty feel.

Big alloys aside you can spot a GSI by its additional chrome trim, rear spoiler, sports bumpers and side skirt and obligatory chromed sports exhaust pipes. An new ‘exclusive’ option allows buyers select their own custom paint colour and the chrome exterior detailing is blackened to deliver a bit more sports car menace.

Who will buy the GSi? Opel says over 90 per cent of GSi buyers are male and while Opel’s OPC high performance label is still alive and likely to be built in the future, the GSi is the hottest version available today. Opel says the five seater is aimed at a well informed premium buyer who might want something a little different to a high end Audi A4 or BMW 3 Series.

Opel Insignia GSI Grand Sport pricing starts from €49,500 and from €50,700 for the Sport Tourer. Customer car deliveries are due by May in time for the 182 registration period.