Subaru’s XV continues in its iconoclastic, but likeable, way

Both pricey and thirsty, the new XV nonetheless represents another step forward for the oddball Japanese brand 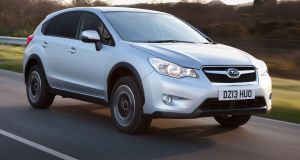 The grille, lights, and rear haunches are all a touch more sculpted 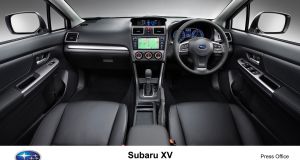 Its combo of light, but accurate, steering and gentle ride quality make it both engaging and easy to drive

If you want to buy a Subaru, it kind of helps if you’re already a fan. The Japanese brand very much ploughs its own furrow and it’s a furrow that’s well off in a distant corner of the field, away from everyone else’s. Mind you, it’s probably a straighter furrow than everyone else’s too . . .

Growing up rural, and in the deep rallying heartlands of West Cork, it’s probably little enough surprise that I have something of soft spot for Subarus. If I doff my cap of objectivity deeply enough (it goes well with my cravat of cynicism) then I must admit to a deep affection for these oddball Japanese cars with their flat-four engines and the legend of Colin McRae hanging in the background.

Of course, the glorious rallying days, of blue-and-gold Imprezas being hurled through forests and across mountain passes at impossible angles and speeds are long gone but Subaru’s trick to modern survival has been two-fold – first, it has concentrated on making SUVs and crossovers (only with the Levorg estate and new Impreza hatchback have conventional bodyshapes started to creep back in) and secondly, it sold a stake of the company to Toyota, giving it a solid financial and shared-engineering base from which to continue its iconoclastic ways.

Subaru has always been something of a minority interest here – it sold a mere 169 cars in Ireland in 2017, mostly thanks to a combo of an ageing lineup, relatively high Co2 emissions, and prices kept high by the strength of the Japanese yen. Indeed, Europe as a whole is a minority interest for Subaru, as it concentrates on the US market, where it’s a big player; the eighth-best selling brand last year, with more than 500,000 sales. That’s ahead of such giants as Kia and even Volkswagen.

The good news is that improved products are beginning to trickle through. Last year’s Levorg was an unconventional delight, and now we have the new XV crossover. It looks very similar to the last one – a Qashqai-sized SUV with a fastback boot and upright styling. This one is rather more handsome though. The grille, lights, and rear haunches are all a touch more sculpted, and while you’d struggle to call it pretty it’s also far from ugly.

The cabin represents one of the biggest single improvements we’ve ever seen from Subaru. In the past, this engineering-led company has blown its budgets (rightly) on its engines, chassis, and transmissions while you basically got an interior for free. This time around, there are actual soft-touch surfaces, leather wrapping with contrast stitching, and a very decent eight-inch touchscreen that’s a little clunky in its menu layout but which includes Apple CarPlay and Android Auto. The seats are comfy, the driving position is good, and there’s reasonable room (although the boot is a disappointing 385-litres) and it might just be the first Subaru cabin that you’d spend time in willingly.

It’s a very safe place to be too. The XV gets Subaru’s stereoscopic camera “EyeSight” safety system as standard, which uses two cameras mounted in the windscreen, plus radar, to monitor the road ahead, rein in the active cruise control, and throw on the brakes if it detects an imminent collision. It’s much better at peering through rain (and even snow, as we found on our test drive) than many rival systems and gives one a distinct feeling of security.

Security is great, but you’ll be short of credit if you buy one. In spite of the Euro and Sterling both gaining on the Yen in recent months, something’s keeping Subaru prices high, and the XV’s range starts at a lofty €33,495. Mind you, both the Euro and Sterling have been gaining against the Yen in recent months, so perhaps Subaru is not being as badly-hit with its prices as it claims . . .

It’s well-equipped as standard, in fairness, but our range-topping test car clocked in at €38,495. You’d want for nothing, in equipment terms, but you’ll feel the pinch compared to (more spacious) rivals.

Is it worth the extra? Well, maybe . . . As I said coming in, you need to be a fan but the XV does have some charm to work. Its combo of light, but accurate, steering and gentle ride quality make it both engaging and easy to drive, while the CVT gearbox is not as unpleasant as such things often are. It is stupidly thirsty though – our 2.0i flat-four, with 156hp, struggled to do better than 8.2-litres per 100km (34.4mpg), but at least its refinement is good. Subaru’s new platform, shared with the XV and the upcoming new Impreza, feels impressively solid too.

What the XV has, though, is indomitability. We also took our an updated Forester 2.0i for a test back-to-back with the XV (yes, even thirstier but at least it has a decent boot) and both deliver a sensation of unstoppable ruggedness. The January weather took a distinct turn for the worse during our time with both cars, and yet rain, sleet, snow, ice, floods, and howling winds failed to intimidate either car. Standard four-wheel drive helps, of course, but it’s also that sense that Subarus have always been built tough, almost (literally as well as occasionally figuratively) agricultural in nature.

Put it this way. Presented with a 1,000km round-trip from Belfast to Galway and back, for a pressing an immoveable engagement, we set out into an actual blizzard. Many, in lesser cars, would have turned back. In the Subaru, we pressed on, happy in the knowledge that it would take a cataclysm to stop us. At which point concerns about price rather faded into the background . . .

Verdict: Never has and never will appeal to all, and it’s very costly, but when the weather chips are down there are few cars better than this.