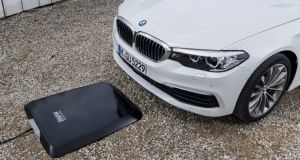 Motorists simply park over the pad, and sensors on the car show you where to steer so the vehicle can communicate with the charger

BMW is set to be the first car firm to offer induction recharging of its cars. While several car firms have been working on the technology behind induction battery recharging for plug-in hybrid and electric vehicles, BMW will be the first to market later this year.

Working on the same principles as wireless charging of mobile phones, the system will recharge the vehicle via a pad on the floor of your driveway or garage.

Motorists simply park over the pad, and sensors on the car show you where to steer so the vehicle can communicate with the charger.

The first car to be fitted with the new technology in the coming months will be the 530e iPerformance plug-in hybrid and its 9.4kWh battery can be charged in about 3 hours 30 minutes.

Other BMWs due to be fitted with the technology soon are the 330e and X5 hybrid as well as future i3 and i8 models.

A BMW spokesman would not confirm the price of the technology, but did not dismiss suggestions that it could cost in the region of €3,000, given that the device will have to be fitted to your garage or driveway by a BMW approved electrician.

The device will only initially be capable of recharging relevant BMW models, but given that the technology has been developed in conjunction with other manufacturers and suppliers it is likely to work with other non-BMW models in the future. Audi is already well advanced in its plans to roll out induction charging on some models in the near future.