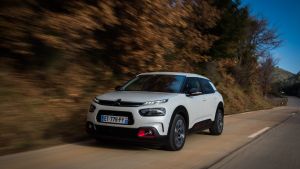 It may look like another quirky crossover, but Citroën’s new C4 Cactus is now the French firm’s entrant in the mainstream hatchback market, pitched against the likes of the VW Golf and Ford Focus.

Out goes the C4 - for now - and instead this new Cactus will mark off against the big boys in the hatchback market. However, while the outgoing C4 was very much an also-ran, the new C4 Cactus has some original traits, even if it has lost some of its distinctive identity by abandoning the plastic “air bumps” that used to blister out from the bodywork.

The look may be a little more mainstream, but in true Citroën style, the new car is offering something a bit different. For potential buyers, comfort is the watchword. Or “ultra-comfort” to be precise.

Citroën has been pitching itself as the comfort choice on the car market since the first C4 Cactus was launched in February 2014, playing on memories of big floating, wallowing French cars of old. Whereas rivals sell themselves on sharp handling and pace, Citroën shrugs its shoulders and says “bof” to such futility. In a world of traffic jams and life’s stress, Citroëns schtick is to say its cars are about overcoming the stress of the hellish commute.

So the latest C4 Cactus is billed as the ultra-comfort hatch. It points to three features of the new Cactus to justify its case: advanced comfort seats, a new suspension with progressive hydraulic cushions, and improved acoustic systems to quieten outside noise from the cabin.

First to the seats and the marriage between Citroën and the world of soft furnishings takes another step closer with the firm’s new pews. It’s not often we write about car seats, but these wide armchairs are so soft and supple they could easily reside in a smart city apartment or an Ikea showroom.

Thanks to lessons learned from the worlds of furniture and bed cushioning Citroën’s seats are padded with what seems like soft downy duvets and draped with high quality fabrics. It’s a world away from the sort of hard shiny material and hard plastics of rivals and a major part of its pitch as the comfort choice on the mainstream market. Instead we get the squishy comfort some might recall from 1970s and 1980s Citroëns.

They combine well with the attempts to give the car’s interior a living room feel, and all it’s really missing at this stage is a few throw cushions and tea candle holders along the dash.

It’s in the air

Next in the comfort pitch is the French firm’s new suspension with progressive hydraulic cushions. Citroën has a long history of soft and supple suspension, from the highly advanced DS models of the 1950s to the simple bouncy suspension settings of the 2CV and Diane.

Citroën’s prowess in comfort suspension traces back to the work of Paul Mages. During the second World War Mages, a Citroën employee with no formal engineering training, developed the concept of combining air and oil in a suspension to create a new level of softness. Fast-forward a few years and his hydropneumatic suspension changes the motoring world. Patents are filed and his innovation is fitted to the DS. Suddenly cars seem to float along over the bumps, ruts and potholes. The system was licensed to other firms, most notably Rolls Royce for its Silver Shadow, Maserati and even Mercedes -Benz.

This new system is not as advanced or revolutionary as Mages’ work, but it does offer up enormous opportunities to play the comfort card on all future Citroëns. First introduced on the C5 Aircross - coming to Europe at the end of this year - what we have here is a normal spring-and-damper system, but with the traditional solid rubber ‘bump-stops’ that control the suspension’s movement in large impacts, replaced by a hydraulic ‘cushion’. That cushion’s job is two-fold - on normal, small bumps it allows the suspension more freedom of movement, with the spring and damper working together but separately to control the car’s motions.

This new hydraulic cushion system has been costed, says Citroën, so that it can be applied to any model in the range

On bigger impacts, the spring and damper work as one, slowing down the suspension’s movement and reducing the impact to the cabin of the car. The hydraulic cushion also means that if the full movement of the suspension is needed, the final impact into the bump-stop is slower, better controlled and the impact is dissipated out rather than being transmitted into the car’s structure.

That structure is also key to the new suspension’s workings - it’s 20 per cent stiffer thanks to the use of adhesive bonding between chassis panels and this allows for a much stiffer structure with no weight penalty.

Interestingly, there’s also very little cost penalty in the system. The last versions of Citroën’s old ‘magic carpet’ hydragas suspension system were limited to top-end models, and larger ones at that. Family hatchbacks and the like had to go without. This new hydraulic cushion system has been costed, says Citroën, so that it can be applied to any model in the range, from a top-end C4 Grand Picasso all the way down to an entry-level C1 city car. So expect the ‘flying carpet’ effect to feature on many future models.

On the road in the C4 Cactus it’s at its best in badly surfaced city streets and at speeds of up to 60km/h or so. However, it doesn’t really lose its composure at speed in twisting roads. You do feel the sideways body movement in corners and it’s not as sharp in the bends as benchmark rivals like the VW Golf or Ford Focus, but in the trade-off for much greater comfort, it doesn’t mean you will be left leaning into bends like a motorbike sidecar passenger. It’s also flexible, and as the same system has been tuned for dynamic traits in its Citroën’s rally cars since the mid-1990s, the cushions can be engineered to offer whatever mix of comfort or dynamic handling that Citroën wishes for any particular model or derivative.

The final pitch is for cabin quietness courtesy in part to features like an acoustic windscreen. In reality it’s not the library reading room Citroën would have you believe, and low engine noise does encroach in the cabin, along with wind noise from the side mirrors at speeds over 80km/h.

Three engine options will be offered on the new car in Ireland. In petrol terms it will feature the peppy little 1.2-litre three-cylinder in 110bhp and 130bhp guise. The 1.6-litre diesel will be in either 100hp in manual. In the current climate it was hardly surprising that Citroën didn’t have any diesels available for test at the drive. And it wasn’t missed. The 130bhp is evidently the liveliest, while the firm’s EAT automatic transmission needs to be handled with a smooth right foot to get the best out of it.

The six-speed manual on the 130bhp - and soon on the 110bhp - is for the best choice. It’s precise and far more amenable to your changing mood, whether it be to sit back and cruise or to kick on.

A senior engineer with Citroën charged with setting the desired driving characteristics of each new Citroën - signing off on them before launch - reckons the best combination for the comfort character of the new car is 100bhp automatic. He’s the expert. For me, the 130bhp manual may lose a little of the sedate Citroën charm, but it brings the car far closer in terms of ability to the leaders in the hatchback pack. Stats suggest a 0-100km/h time of 9.9 seconds for the 110bhp, which seems about right, but 8.7 seconds for the 130bhp manual is slower than it actually seems behind the wheel.

The interior retains its admirable touches, though headroom in the back is tight for tall passengers and bootspace is comparable with most rival hatchbacks, although a high lip makes loading unnecessarily more of a chore.

Prices have yet to be confirmed but customers can probably expect it to be in the range of €21,000 for the 110bhp 1.2-litre petrol.

What this Citroën loses in its quirkiness by abandoning the “air bumps” it makes up for in its comfort play. The Cactus retains the nice interior touches, like the strap door handles, though the touchscreen control on the centre is still not as slick as rivals.

Neither the C4 hatchback nor the previous Cactus were strong sellers here, and the French firm doesn’t really expect to sell at the same levels of the VW Golf (VW produces 500,000 of them annually against plans to produce 60,000 to 80,000 C4 Cactuses). However, with its mix of crossover looks but hatchback criteria, this C4 Cactus is far more likely to find a willing market, particularly amongst Irish buyers looking for a little more comfort in their daily commute.

Prices: TBC but given the market averages then likely to start in the range of €21,000