The new range boasts a very impressive 1.4-litre petrol but the key to its future will be an upcoming crossover variant 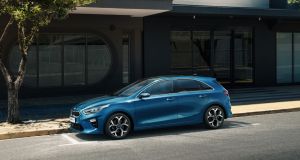 Kia’s new Ceed – notice the missing apostrophe this time – is ready for the road. In fact, it’s even capable of a little off-roading as well. But more of that later.

The Korean car firm is determined to match its European rivals in the hatchback category, even if the world’s buyers are all seeming to turn to crossovers.

There’s a certain irony to the situation that’s not lost on its rivals. It was the Asians, after all, who introduced Europe’s consumers to crossovers, which has hit sales of hatchbacks – traditionally a forte of French and German car brands.

So having lured away great swathes of traditional hatchback buyers to their crossover models, the Koreans are now determined to put up a fight for the remaining hatchback hardliners. In the past this has proven a thankless task, taking on the likes of the Ford Focus or VW Golf. With such loyal followings, challenges these heavyweights was always an incredibly costly effort.

The fact that Kia is investing billions of euros – it won’t say exactly how much – to develop a truly competitive Ceed specifically for European buyers, expresses not only a certain confidence within the brand, but also a belief that they are now a proper mainstream player on this continent. This car was penned at its design centre in Frankfurt and will be built at its plant in Slovakia.

In styling terms the car is very conventional in its hatchback form. However, this is only the first iteration of the new Ceed range and sources suggest that the family could end up boasting four iterations, including a very funky looking crossover. For the other two, we can expect to see an estate version – which is popular in large mainland European markets – along with a more stylised version of the longer format. Kia has confirmed that it’s not going to bother with a three-door variant of the car.

But what’s it like on the road? Well we managed to test out all four engine variants of the car ahead of its launch.

The engine options start with an updated version of the firm’s 1-litre turocharged 120bhp petrol engine. It’s a lively little unit, but it is quite noisy when in lower gears. Next up is a new 1.4-litre turbocharged 140bhp petrol unit, the most impressive of the bunch. This replaces the outgoing 1.6-litre petrol unit and it’s a bit of a gem, with smooth delivery of power and always refined. We even pitted it against some unexpectedly rough and tumble conditions – we got lost on the test route and ended up reverting to a muddy mountain pass for about 5kms rather than actual road. The petrol Ceed excelled.

Most impressive was the suspension settings, which soaked up the sort of potholes and water gulleys you would normally find on the “off-road” section of a crossover launch. It’s certainly not what you would put a normal hatchback through. The fact it did so well suggests great promise for the Ceed.

Being able to cope with the rough and tumble of a potholed dirt track while still offering an engaging drive on the tarmac is quite an achievement, suggesting vast improvements by Kia’s suspension engineers.

Steering feel could still be a little sharper, but the new Ceed is a vast improvement on the outgoing model – and many other Kias – in this regard. It might not match the VW Golf or Ford Focus in terms of steering feedback but it comes very close.

Of the other engines on offer, there is a new 1.6-litre diesel with the option of 115bhp and 136bhp). Every engine will be paired with a six-speed manual transmission, while the new 1.4-litre and the diesels will also be available with Kia’s seven-speed double-clutch transmission. The seven-year, 100,000 mile warranty remains.

The interior boasts standard tech fare, with either a 7-inch touchscreen or 8-inch with sat-nav. It’s not cutting edge, but it’s on the money for the average cars in the hatchback class. There nasty hard plastics of yesteryear that used to be commonplace on affordable Korean cars are thankfully a thing of the past.

However the Ceed does boast the latest “level-two” driver support system, which means the new Kia can stay in its lane, and spot the car in front and follow it at a respectful distance. It works in stop-start multi-lane traffic, and at up to 130km/h.

First impressions on cold mountain roads – and off-road tracks – in northern Spain in camouflaged test cars are perhaps not the rule upon which we should make any final calls on this car, but we went away from the Ceed with plenty of positives. The diesels are efficient, but the 1.4-litre was the star performer. And what really surprised was the handling and suspension. It’s ability to cope with our unexpected detour across the mountain pass not only proved how well the car can cope with bad roads, but also calls into question why you would need a crossover when the new Ceed does the job so well.