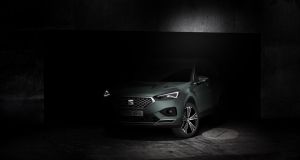 Seat released a rather shady image of its new Tarraco SUV, but you can imagine a Skoda Kodiaq with a Seat badge would give you a good idea of what the car may look like.

Seat has confirmed its upcoming seven-seat SUV will be called the Tarraco, named after a World heritage site in the Catalan city of Tarragona.

The new SUV, due to be luanched at the end of the year, is based on the current Skoda Kodiaq and will rival the likes of the Nissan X-Trail amongst others.

The third SUV in the Seat range, it follows on from the Ateca and Arona.

Seat released a rather shady image of its new Tarraco SUV, but you can imagine a Skoda Kodiaq with a Seat badge would give you a good idea of what the car may look like.

The VW Group firm conducted an online poll of locations in Spain, but there are suggestions the poll may have been caught up in the ongoing Catalan independence controversy as the result was due to be revealed earlier in the year, but coinciding with recent elections.

Tarraco was chosen by the public via an online poll, which featured more than 146,000 votes.

The brand is also preparing for the launch of its new Cupra sub-brand. The decision to spin-out what is currently a sports division of the group into its own brand has been driven by current boss Luca de Meo.

However, similar strategies by the likes of Citröen with its DS brand have not proven to be successful to date, so Cupras destiny remains uncertain. Sources within the company are at pains to point out that the brand will offer more than rebadged Seat models with higher equipment trims, but it may be some years before distinctive Cupra models that differ substantially from Seats are on the road.