Home Front: Are these the finest wooden spoons you can get? 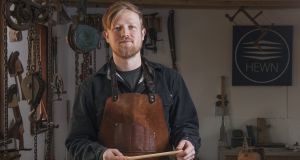 Éamonn O’Sullivan of Hewn in his workshop.

Éamonn O’Sullivan of Hewn works with greenwoods using traditional techniques and tools to create some of the most tactile utensils and kitchenalia on the market.

Galway-based Michelin star restaurant Aniar serves up some of its dishes with his signature spoons. He says his work is a reaction to mass production and the lack of character of everything you see in a shop.

O’Sullivan is hosting a series of workshops where he will be making cocktail stirrers from the staves of used Bushmills whiskey barrels as well as his spoons, and the event is being paired with a whiskey tasting by the master distillery. Tickets are free but you have to register at the Black Bush website below to be in with a chance as places on each night are limited to 25. The events takes place at 7.30pm at Drury Buildings, Drury Street, Dublin on Tuesday, 23rd and Wednesday, 24th July.

Later in the month, similar workshops will take place at The Cow Bay, an upstairs space at The Point, Dublin Road, Belfast. Hewn’s full range of spoons, coffee scoops, mead cups and porridge bowls is available to buy online – all beautifully photographed by the master craftsman. blackbushstories.com; hewn.ie;

Minima has filled its Hanover Quay showroom with some of the most recognisable furniture in the world for an exhibition that will run over the next three weeks. On show are designs by a mix of renowned designers including Charles & Ray Eames, Edward Barber and Jay Osgerby among others, made by the furniture company, Vitra.

Each piece will be shown along with a narrative recounting the history and story behind the design, its origin and the designer including technical drawings, sketches, synthetic resin models and prototypes.

According to Helen Kilmartin, director of Minima, the show is “an education piece about design classics and their heritage”.

“In a world where we see the work of original designers copied, replicated and tweaked to be manufactured in poor quality that will not last, this exhibition presents the real pieces, their longevity, design function and their stories.

“The beauty of Vitra pieces is that they are design classics which will stand the test of time. Equally, they are so workable with antiques and other contemporary pieces.” See minimahome.com

History and mystery in a Connemara garden

Gardens do not want to be gardens, they want to be wild nature. Yet, as humans, when faced with the feral remnants of what was once a lavish garden of rare specimens and ornate herbaceous borders, it can be sorely tempting to get the pruners out and start hacking back, revealing the secrets beneath the undergrowth, like Michelangelo uncovering David from a block of marble.

This is what the French botanist, Gilles Prevost, is doing at Cashel House Hotel, in Connemara, an elegant country house on the shores of Cashel Bay near Recess. It was built in 1850 for an English kelp merchant, Captain Thomas Hazell, who, along with his wife, laid out an elaborate garden of rare specimen plants that suited the maritime climate.

Most of these flowering trees and shrubs have died off long ago, but amid the dense thicket of more recent bully bushes, such as laurel and rhododendron ponticum, are a few elderly survivors from 170 years ago. It is these that Prevost is searching for as he hacks back the tangled undergrowth – these Rip-Van-Winkle plants, some of which are in remarkably good condition, such as a rose hedge that is believed to have been planted as a gift from the captain to his wife to mark their 40th wedding anniversary in 1885.

He’s uncovered many surprises hiding in the overgrowth, such as a vast mystery tree over 20 metres tall with leaves, “that I recognised from somewhere, but couldn’t identify. Then, this spring I noticed bright red young leaves high up on it and I realised that it wasn’t a tree at all, but a shrub. It is a photinia, very common in France, but never as a tree. In fact, the books say that it shouldn’t reach that height.”

Amid the entombed shrubbery there are other more recent treasures too – some even more valuable, for the house was bought by an avid plantsman in 1919, James O’Mara, a Limerick bacon baron, Westminster MP and Sinn Féin TD, who amassed an eclectic collection of flowering shrubs, many of them shipped from Asia and the Americas, including azaleas, camellias, eucryphia, and some unusual magnolias.

O’Mara tended the gardens over three decades, planting some of his most prized specimens in a former orchard enclosed behind tall walls. He replaced the apple trees with an array of prestigious foreign specimens, among which the Irish Tree Society has recently identified Persian ironwood, Japanese snowbell and snake-bark maple.

“I’ve always dreamt of looking after a garden like this,” say Prevost, “a place so full of both history and mystery. In Bordeaux I created some very elite gardens for wealthy clients, but it’s an honour to be able to reveal an ancient Connemara garden, to peel back the gloomy overgrowth to find the beauty beneath.”

The garden’s guardians since 1967 have been the McEvilly family who’ve run a hotel there for 50 years. One of their first guests was the French president and leader of the French Resistance, Charles de Gaulle, who spent his first holiday here after retirement in 1969. cashelhouse.ie