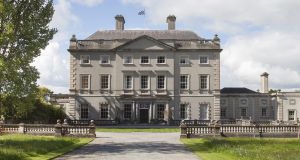 Abbey Leix, the vast Co Laois estate and former ancestral home of the deVesci family, has been put for sale on the international market  with an asking price of €20 million.

For the last 24 years the 18th century house, which is considered one of the finest in Ireland, has been owned by David Davies, a businessman whose family put down roots in Ireland in the 1940s and who has enjoyed a successful career in banking and property.

Turning 80 this year, and having finally become an Irish citizen, Davies is now planning to downsize to his family’s original Irish home, Killoughter in Co Wicklow, a Georgian house on a more manageable scale. But first he needs to find a suitably wealthy and heritage-conscious buyer for Abbey Leix, which was designed in 1773 by noted architect James Wyatt, and was home to the deVesci family for over 300 years.

It’s a house that requires a good deal of TLC, as he discovered on buying it in 1995 when there was no central heating and it needed to be completely rewired, according to an interview Davies gave to the Leinster Express in 2017. It took, he said, four years to renovate, with all of the house’s 117 windows having to be replaced. The restoration of the house has been documented in a book by historian William Laffan, which was published by Davies, who is president of the Irish Georgian Society.

Now, the carefully restored house is filled with classic Irish furniture and art, some of which may be available to new owners should they care to acquire it.

The estate comes with 1,000 acres of grounds, including stands of specimen trees, walled gardens and farmland. There are no less than 10 estate houses and cottages.

Selling agent Marcus Magnier is confident a buyer will be found, but says it could take years rather than months to sell. “You budget for a lengthy campaign at this level of the market,” he said, citing Luggala, the Wicklow home of the late Garech Browne, which has been on the market since early 2017, asking €28 million.

Earlier this year Castletown Cox, a grand Kilkenny estate which came on the market in 2017, was reported to have been sold for €19 million, although the sale appears to have been delayed by a family dispute.

At the time, it was reported as the biggest residential estate sale in the State since Castlemartin, the home of former businessman Anthony O’Reilly on 750 acres in Kildare, sold to US businessman John Malone for €28 million in 2014.

Meanwhile, closer to Dublin, Seafield House, a grand Palladian mansion in Donabate, is still for sale at €9.95m having come on the market over a year ago.

Abbey Leix is being offered for sale  jointly by Colliers and Sotheby’s International.