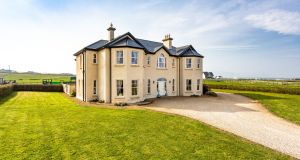 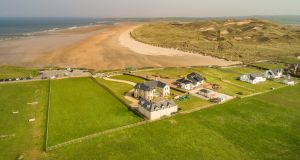 “It feels like you are in the countryside with the fields around us, but the town is just a few minutes’ walk, and it is really a wonderful place to raise our two children”

Bundoran, the most southerly town in Co Donegal, now bears the nickname Surf Capital of Ireland. In 2012, the town overlooking the waters of Donegal Bay hit the headlines when it was listed in National Geographic’s Top 20 of the Worlds Surf Towns, and one of only three European beaches to make the list.

The previous year, Bundoran hosted the European Surf Championships. The annual Sea Sessions Surf and Music Festival is now in its 11th year.

“The area here overlooking Tullan Strand is a green belt, so planning took a few years but I knew exactly the type of home I wanted and the views are just amazing,” says Ramona Nicholas of her substantial 426sq m (4,584sq ft) home perched on an elevated site overlooking the beach, just a few minutes from the seaside town.

The neo-Georgian property, constructed in 2009, was designed by Belleek-based architect Ronan Murphy and centred around the front hallway, an imposing reception room complete with a fireplace and where the family’s grand piano sits. Nicholas, who trained as a pharmacist at Queen's University Belfast, funded her college education by giving piano lessons.

Along with husband Canice, also a pharmacist, the couple established Cara Pharmacy Group, which now has 16 pharmacies in the northwest employing 180 staff.

In 2017 the couple acquired Abbey Healthcare, formerly the healthcare division of Hayes Conyngham Robinson (HCR) when HCR was sold to Boots. The company, now with a 245-strong workforce, provides the outsourcing of pharmacy services to nursing homes, hospitals and long term health institutions throughout Ireland.

It is due this that the couple are selling up: “While it has been a wonderful home for the past decade, with Abbey Healthcare based in Dún Laoghaire we are now spending two to three days a week in Dublin and commuting is just too difficult” explains Ramona.

While Ramona has been busy with the establishment of both her pharmacy and healthcare companies, over the years she has appeared as an investor on Dragons’ Den and RTÉ’s Secret Millionaire, in addition to winning Women Mean Business Entrepreneur of the Year Award in 2014.

Despite using an architect and Claire Daly, the Enniskillen-based interior designer for paint and curtains, all the interiors were of Ramona’s design and choice. “The kitchen was the first thing I picked for the house, I wanted it open plan so you can see the sea views from all the interior spaces.”

The kitchen, which was installed by Tyrone-based Greenhill Kitchens, opens into the sitting and dining areas taking up the full length of the house, allowing light from the south-facing rear aspect and maritime views from the front of the property.

The property has five bedrooms, all of them en suite, and the decor with pale neutrals allows the maritime vistas to take centre stage. “While the house looks very large from the exterior, the open plan layout of the main reception rooms actually makes it very homely.”

In addition to the house, there is an extensive two-storey building extending to 223sq m (2,400sq ft), which offers an array of uses. It currently houses a garage and three storerooms on the ground floor, while upstairs is plumbed for underfloor heating and a shower unit.

“It feels like you are in the countryside with the fields around us, but the town is just a few minutes’ walk, and it is really a wonderful place to raise our two children,” says Ramona, of the panoramic views of Donegal Bay against the dramatic backdrop of the Sligo-Leitrim mountain range.

Besides being an ideal location for surfing – the town has five surf schools – there are superb walks in the area in addition to two local golf clubs, including the Eddie Hackett designed course at Donegal Golf Club on the nearby Murvagh Peninsula,  which is purported to be one of the longest golf courses in Europe.

The property, which lies behind electric gates and is in turnkey condition, was featured on Celebrity Home of the Year in 2018, upon which judge Hugh Wallace described the house as  being “exceptional”. It is on the market through Savills seeking €635,000.

Patio pleasers: 10 tips for summer plant pots that will flower all season long
2