Rocky road to height of luxury in Dalkey for €2.6m 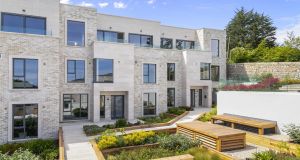 17 Enderly in Dalkey, Co Dublin: to say that nothing has been overlooked is an understatement, including the St Ives Cream Rustica bricks, imported from Belgium 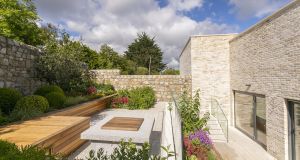 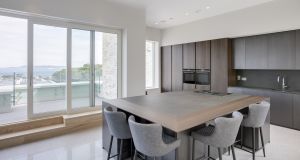 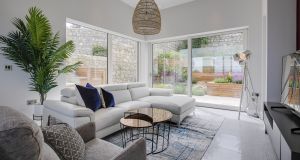 “This really was a labour of love and took a lot longer than we anticipated,” says Eugene Larkin, chairman of Twinlite, the developer behind Enderly, a scheme of 18 luxury new homes on Cunningham Drive in Dalkey.

Twinlite has developed a number of high-profile schemes in Dublin and London including Embassy Court in Ballsbridge, Ludford in Ballinteer and the award-winning 12 Arthur Street in London.

Larkin, who credits his sons Michael and Richard with the development, explains: “Due to the deep granite, and the proximity of neighbours, we could not blast the bedrock – as one would normally do – so it had to be done by bore holes through the rock to create fissures.”

The site which is purported to be the largest rock excavation for an Irish residential scheme, involved 2,300 truckloads of rock being removed from the site.

The land was originally purchased by a consortium of developers in 2008 for €20 million, though their plans never materialised due to the timing of the property crash. Twinlite purchased the site in 2011 and, now complete, there remain only three units for sale out of the 18 homes, as the remainder were sold from plans well before the development was completed.

Number 17, called Sorrento, is one of the larger properties in the development, extending to 350sq m (3,776sq ft) over three floors. To say that nothing has been overlooked is an understatement, down to the St Ives Cream Rustica bricks, imported from Belgium, to the high-tech cinema at basement level, and charging ports for electric cars.

Ceiling heights rise to 3.5m, and the property is inverted to maximise the views from the living and dining areas on the upper floors. Vistas stretch from the Pigeon House all the way to Howth, and the design also allows these views from the raised maintenance free rear garden which comes complete with a granite fire pit.

Number 17 has four bedrooms, three of which are on the middle level, and all bathrooms in the property are decked out with Villeroy & Boch sanitary ware.

Even the lighting system has a feature whereby it illuminates gently – so as not to wake you up completely from slumber – for night-time trips to the loo.

The property has a lift, and two car spaces in the underground car park, the level where the cinema, utility and a room to spare lies.

But the piece de resistance is the top floor with high-end Pedini kitchen, living space and tiered rear garden.

Though not large, the gardens have been landscaped by Murphy and Sheanon, and feature red cedar and granite set around beds of lavender. There is also a communal garden which too provides wonderful sea views.