O’Malley Homes could clean up with new apartments in Clonskeagh 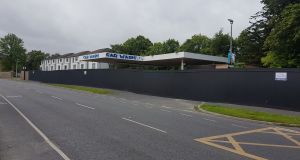 Former Shell garage on Roebuck Road, Clonskeagh: is the subject of a proposal for 43 apartments.

For well over a decade now, the operators of the Prestige 24-hour car wash in Clonskeagh had quite literally been cleaning up thanks to the steady flow of traffic passing up and down Roebuck Road on the way to and from Dublin city centre.

All that is about to change, however, judging by the recently renewed efforts of developer O’Malley Homes to transform the former Shell petrol station premises into a high-end residential scheme.

While the company had sought permission from Dún Laoghaire-Rathdown County Council as far back as 2006 for the construction of 26 apartments comprising two one-bed units, 21 two-bed units and three three-bed units , the onset of the financial crisis saw its plan for the site put on hold.

Having bided their time for over 12 years now, the O’Malleys could well be on the verge of cleaning up in a manner that the former customers of Prestige could only dream of.

In a new application to the council, which it lodged earlier this year, the company has sought planning permission for a scheme far more ambitious than the one it had hoped to deliver during the boom.

On this occasion, the developer is seeking approval for 43 apartments comprising 16 one-bed units and 27 two-bed units in a new five-storey over-basement building. All of the proposed apartments will incorporate balconies or terraces, while the overall scheme will include 47 car parking spaces, and 92 cycle parking spaces.

Should the scheme secure permission, it should provide a welcome return for O’Malley Homes on the €5 million it paid originally to acquire the Roebuck Road site during the boom.