State millions and good memories: Bringing a grand house back to life

After a careful refurb, Doneraile Court is open to visitors after being closed for decades 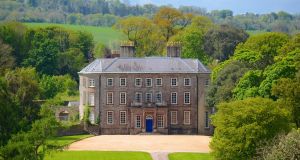 Getting into Doneraile Court involves climbing past the fallen rim of a balustrade which once enclosed the orangery where diarist and diplomat Harold Nicolson remembered sitting as a boy on a wet afternoon, “inhaling the smell of the tube roses . . .” Today the smell is of paint and air and of the kind of dust which comes from new-laid floorboards.

It is revival time at Doneraile where, after years of protective but dismal closure, the Office of Public Works (OPW) has at last opened the ground-floor rooms to the public in time for summer. It’s still a hard-hat site and in the boudoir Mary Heffernan, general manager for the OPW at Doneraile, is sitting on the floor with architectural historian Christopher Moore, passing from hand to hand the sheets illustrating where the furniture for this room is to be placed and the paintings are to be hung.

Mary Heffernan’s genius for striking sympathetic relationships with curators and practitioners throughout this country and elsewhere has flourished in her friendship with Mary McCarthy of the Crawford Gallery in Cork.

“The idea is for a Crawford outreach at Doneraile, with selected works from the gallery now and Christopher is building up a house collection of good paintings in good frames and largely of Cork 18th century provenance.”

More paintings, miniatures, tapestries and mirrors are to come; the walls are painted in colours chosen from Edward Bulmer’s natural plastic-free heritage range and fittings include a marvellous fireplace as a reminder of the work done here by the Irish Georgian Society (IGS) until it ran out of funds.

“The atmosphere of this house is based on survival,” says Moore as he indicates a pale curve near the library window. “We want to leave the signs of what has been here and what has gone. The centuries since the 1720s leave their mark. They are so easy to erase but they are all part of that long story of the St Legers of Doneraile which brings us to today.”

But why today, I ask Mary Heffernan. After all, Doneraile Court and Park have been with the OPW since 1994. In fact, the Doneraile estate became something like a catalyst in the development of Ireland’s responsibility for its heritage of buildings and wildlife.

Its integrity as a “beguiling and intact walled demesne” was recognised by Henry Gray of the Forestry Division and the then minister for lands Seán Flanagan. According to Fergal Mulloy (in Irish Forestry 2015), their joint legacy is the saving of Doneraile Court and park which were bought by the Land Commission in 1969.

In 1984 the 400 acres of parkland with its canals and weirs drawn from a diversion of the Awbeg were open to the public, an event which coincided with the purchase of a lease on the house by the IGS spurred on by Desmond Guinness.

With the IGS came Arthur Montgomery as live-in caretaker for the next 20 years. Towards the end of that span the IGS role was taken over by Dúchas, succeeded by the OPW, at which point Arthur left Doneraile convinced that there would be no return.

“It seemed nothing could go on here, and that was very hard,” he remembers. But he is back as part of the team engaged on this renaissance, his shopping bag laden with retrieved Victorian curtain swags and tassels. He wonders where the dolls’ house is to be placed as he has the furniture for it. As its wallpapers repeat those used in the main rooms, Christopher Moore immediately recognises the decorative usefulness of the toy.

“Arthur brings such authenticity to our plans,” says Heffernan. “He’s been able to repatriate so many items we’re blessed that he’s here and is so knowledgeable and so passionate about the house.”

She is passionate herself about the properties in her care and, with her colleague Ellen Brickley, appreciates the long latent romance of Doneraile Court from the 16th century Synans to Sir William St Leger and his descendants.

Events manager Kieran Owens can fill his programmes with episodes such as Ireland’s only lady Freemason, or the horse race between the steeples of Buttevant and Doneraile in 1752 which resulted in the St Leger steeplechase at Doncaster. There are the links to poets Tadhg O Duinin of Munster’s Bardic School and Edmund Spenser at Kilcolman and to novelists William Thackeray and Canon Sheehan in Doneraile town, to Louis Pasteur and his cure for rabies too late for the 4th Viscount Doneraile, to American jurist Oliver Wendell Holmes and his “Hibernian” Lady Clare Castletown, last daughter of the house. There’s Elizabeth Bowen, whose literary importance and frequent visits to Doneraile Court will feature in a dedicated gallery of portraits, photographs and memorabilia.

“The nuances here are still so alive, so present,” says Heffernan, who insists on a museum standards quality guiding her department while, as an economist, she expects wherever possible a self-sustaining potential.

“The OPW has been trying for years to get funds approved for the renovations here, I was just lucky that when I came in to Doneraile last year that approval had been given for the first round of work at the house.” That was a contract for €1.6 million with the Costello Company of Tralee in charge of complete re-wiring, new heating, fire and security systems, structural reinforcing for many of the floors and repairs to original doors and fittings.

She points to the accumulation of skills in conservation, research and restoration stemming from properties such as Farmleigh, Castletown where Moore was chairman of the Castletown Foundation, Kilkenny Castle, Dublin Castle and, most recently, Emo.

There has been goodwill from a number of quarters. “Things arrive: here on the floor lies a large French rug – basically a kind of tapestry,” says Moore, which was in the house until 1969 and has been offered back as something that once belonged to Doneraile Court. “The goodwill is incredible; people are so in love with the house.”

Doneraile Court was once the economic lifeblood of the town, drawing from its streets and hamlets the necessary staff from laundry and dairy maids to grooms and ghillies. Now it comes back into focus as a powerful addition to a town already aware that nearly half a million people visited Doneraile park in 2017.

Entry to that Robinsonian pleasure ground remains free, but the house will be ticketed. “Everyone works better if things are run on business terms,” says Heffernan who sees Doneraile Court becoming a major cultural destination.

That benefit should spread out from Doneraile: Neil Porteous is National Trust head of gardens in Northern Ireland and is working here on reclaiming the formal gardens (and “eventually” the orangery) while also dealing with Annes Grove near Mallow. It’s all going to be north Cork, from Bowen at Kildorrerry to Annesgrove near Mallow and here to Doneraile; no wonder Cork County Council is heading a festival in the town on opening day.

In the inner hall the cantilevered staircase swirls high to the beauty of its ceiling; an alcove under its initial sweep may suit the dolls’ house, and in the boudoir Heffernan and Moore prepare to unroll the returned French rug. It is done as carefully as if they expect Cleopatra herself to leap from its folds and, given the creative empathy binding them to this house, it would be no surprise if she did.