Listen here: missing out on incidental learning is no joke 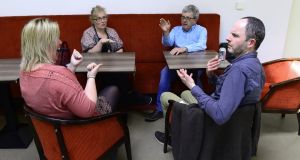 The old saying that you learn something new every day continues to be very relevant, even in this digital age.

You can learn something new every day of your life, but what isn’t so well-known or acknowledged is that most of our knowledge is acquired through incidental learning.

It’s not to be confused with informal learning, because while the setting may be informal (eg, private tuition at home), there is still the intention to learn.

Children will gain access to incidental learning in a number of ways, including observation, repetition and problem-solving; but arguably the biggest single conduit is through social interaction with other children.

Being deaf from an early age, it proved an almost heavens-opening epiphany the day I learned that incidental learning was a thing.

The truth is, of course, I was a master bluffer, a wallflower, a member of the crowd, present and yet absent

It made me realise just how much I missed out during my school years, even when I thought I was doing pretty well.

I attended mainstream schools, where many of my teachers would likely have described me as a fully-integrated, assimilated, functioning student. The truth is, of course, I was a master bluffer, a wallflower, a member of the crowd, present and yet absent.

I learned just about enough in the formal settings of the classrooms, but the assistive hearing-aid technology that helped me hear the teacher directly didn’t extend to being able to pick up what my classmates were saying.

Nor was I able to pick up on much or any of the chatting, gossiping and joking outside the classroom or in the yard or on the bus home. Sure, I listened earnestly, picked up a word here and there, but access to the full understanding and contexts would always be elusive.

That’s not to suggest that many of the idiots, jokers and hecklers among Rathmore Grammar School’s class of 1991 had much to contribute to our collective, formal learning, but I’m only really beginning to comprehend now the amount of incidental learning I missed out on back then.

Indeed, it surprises me that the subject of incidental learning is only beginning to get some traction in the broad, multidisciplinary field of deaf education.

But some scholars are now suggesting that teachers and parents can create better conditions for incidental learning for deaf children, simply by being aware of the opportunities for it and inquiring about accessibility.

Does the deaf child have access to the language of incidental learning that occurs at the library, during break times, at lunchtime, during formal classes, during practical artwork and laboratory workshops, after-school activities such as sports and music, and meetings in extracurricular clubs such as debating, foreign languages, drama, chess, etc?

It is suggested that teachers could try and find ways to integrate incidental learning with structured learning. A good example would be to allocate classroom time for discussions on informal topics, such as where students like to socialise and why, favourite books, or what happened at the dinner table last night. Teachers can share information of their own as well, and then relate it to what they are teaching in their formal classroom settings.

But if the child is still missing out, it may mean coming to terms with a reality that some deaf education experts might find difficult to accept: that the conditions for incidental learning can be much easier to create in a deaf school environment than a mainstream one.

The joke never sounds quite so funny the second time around; it loses the context

Once a child has enough sign language (or sign-supported language), they have better access to language and therefore countless more opportunities for incidental learning through after-school clubs, sports, organisations and just hanging out with their peers.

In the same way that I missed out on more incidental learning than I realised at mainstream school, many people today still often say back to me when I ask them to repeat a missed joke or a casual aside: “Ah, it’s not that funny”, or “It’s not worth repeating”, or “I’ll tell you later”.

These days I understand why they say this. It’s partly laziness, yes, but more likely its because the joke never sounds quite so funny the second time around; it loses the context and nuance of the social interaction that gave rise to it, and therefore its potency.

So to anyone who recognises that they do this to a deaf person: I get it, I really do – but it doesn’t make it any less annoying. I know you mean well, but you are denying us crucial bridges to valuable incidental learning.

Having said that, I will apologise in advance if you ever join me with a group of friends chatting in Irish sign language.

The disappearance of Trevor Deely, part 1
5

‘Get off your phone/laptop/console,’ I roared through 2019. Now I say the opposite
7

Is this the beginning of the end? Who knows, but general practice is open
8

Vol-au-vents are back: puff pastry towers get a timely, tasty makeover
10

Michael Harding: One day I couldn’t walk back up to the house
Real news has value SUBSCRIBE