We deaf people have been making ourselves heard . . . loudly 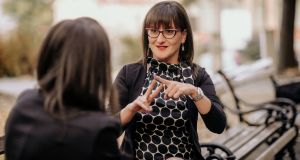 ‘Irish Sign Language is officially recognised as a language in its own right, thanks to its users finding their political voice and waging a strong campaign over many years.’ Photograph: iStock

As a profoundly deaf person, I wear my cochlear implant (CI) and hearing aid pretty much from morning to night, so I don’t live in a “silent world”, except when I take them out (and usually before I go to sleep, which is useful). But while it’s true I don’t hear anything when I do take them off, thanks to my tinnitus I’m not exactly enveloped in a blissful world of quiet.

Tinnitus is that condition where sufferers hear noises or ringing in their ears, but which have no external source. The sounds can change tone and shape at any time and, while I cope with it okay, it is a common affliction among deaf people who wear hearing aids or cochlear implants, as well as those who aren’t deaf.

So when I read sentences – usually in newspaper or magazine headlines – that contain some combination of the words “deaf”, “silence”, “world” and “trapped”, it doesn’t really ring true to me, no pun intended. Many of us use hearing aids or CIs, so the problem isn’t the availability of a pathway to sound (although a CI or hearing aid won’t always work for every deaf child or adult).

Having said that, CIs and hearing aids can create a cacophony of sound that can often be overwhelming because they amplify or recreate all noise – noise that hearing people can unconsciously filter out and assign meaning to in a way we often can’t. So when users switch off their devices, the silence that cuts in is immediate and blissful.

Except for tinnitus sufferers, of course.

Similarly, those of us who don’t wear hearing aids or CIs don’t live in a silent world either. Their thoughts are full of sign language, faces, expressions, body language, images, words and movement. If they experience silence in any meaningful sense, it would be through the absence of visual noise rather than aural noise.

Nonetheless, there is an enduring trope about “deafness” and “silence” that desperately needs challenging. Basically, when hearing people think of silence, they may think of a complete absence of sound and, with that, they assume that deaf people are themselves silent. This, in itself, implies powerfully a whole range of things: that we have no voice; that we are invisible; that we are unreceptive to sound or music; that we are empty inside.

So let’s look at these.

History of being silenced

It’s certainly true that as a distinct group, sign-language users have a history of being silenced – their languages were forbidden (banned in schools); they were punished when caught signing; they were required to assimilate by having to spend a disproportionate amount of their classroom time learning how to speak.

Today, Irish Sign Language (ISL) is officially recognised as a language in its own right, thanks to its users finding their political voice and waging a strong campaign over many years. But while they are more visible as a result, there’s still a long way to go before ISL is embedded in public life to a point where users don’t have to constantly fight for the access and participation they are entitled to.

This integration into public life also needs to consider how phonocentrism – the idea that spoken language is superior to written or even visual language – can render public spaces and services difficult to navigate or access for deaf people. In other words, both public and private organisations need to consider making their services more accessible to deaf people, such as providing options other than “please call this number for . . . ”

The deaf community in Ireland has been making itself heard through participation in mainstream arts through ISL, while a deaf and visually impaired musician in Cork has (in partnership with others) developed a vibrating/visual mechanism to support deaf people engaging in music.

On that note, there has been work done in Ireland on embodied musical experiences, such as incorporating sign language into musical composition and how that can benefit deaf people. Sign language poetry is beginning to gain credibility as a distinct art form, too, thanks to the ready availability of video technology.

There is also a strong point to be made about how language can be expressed in different modes, but how society tends to overlook languages that are not spoken, heard or written. This, of course, includes sign languages but also tactile sign languages for deaf-blind people – now there’s a community of people in Ireland who are seriously underserved and practically invisible.

So while there is still a long journey ahead, we deaf people are certainly making ourselves heard far more loudly than at any time in the past, thanks to new technology and the advancing medium of Irish Sign Language.

We may have been silenced in the past, but we were never silent in the first place.

Clash Happy: Fashion for a different kind of Christmas
6