Self compassion on the table for World Anaesthesia Day 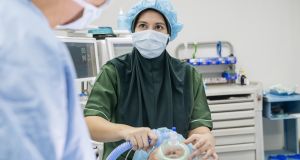 Self compassion is the theme of a talk for consultant and trainee anaesthesiologists in Dublin on World Anaesthesia Day (Tuesday, October 16th).

The College of Anaesthesiologists is keen to highlight the supports that exist for medical doctors who embark on the six-year training to become an anaesthesiologist (formerly known as an anaesthetist), having lost two trainees to suicide in the last year.

“Medical doctors are prone to the same physical and mental illnesses as other people and we need to recognize and minimize the risks for our trainees,” says Dr Brian Kinirons, president of the College of Anaesthesiologists.

While he won’t speak about the personal experiences of the two trainees who died, he says their deaths have brought a sharper focus on how medical doctors and those undergoing specialist training need a supportive work environment and access to mentors, college tutors and counselling if necessary.

“Anaesthesiologists are dealing with multiple simultaneous demands. They work long hours and work at the coalface of medicine. Up to 70 per cent of patients will see an anaesthesiologist. They are part of the team for surgery, emergency care and obstetrics,” says Dr Kinirons who works as a consultant anaesthesiologist at University Hospital Galway.

The academic training is also arduous. “And, you’ve got to consider that this is a group of high achievers with a high standard of practice where there is a huge expectation of the role and vocational commitment and motivation,” says Dr Kinirons. “Sometimes, high achieving individuals who are perfectionist is a potent cocktail.”

Resilience training is part of medical school education at undergraduate and postgraduate level, but Dr Kinirons says that this in itself is not enough. “One day courses on resilience are not enough. We are getting feedback from our trainees about burnout from organisational structures and systems,” he adds.

Fatigue in particular has been identified as a risk factor for poor mental and physical health. “We now know that working for more than 60-70 hours a week is associated with poor health, poor job satisfaction, risk of burnout and poor patient outcomes,” says Dr Kinirons. The Association of Anaesthetists in Britain and Ireland has a #FightFatigue campaign. “This campaign stresses the importance of adequate (working) facilities, debriefing, rest periods and making sure people get home safely after work,” explains Martin McCormack, chief executive officer of the College of Anaesthesiologists.

Following the death of the two trainee anaesthesiologists, the College of Anaesthesiologists opened up the college to colleagues so that people could process their grief and speak to others in a safe and supportive environment. “We created a space for people to come together and reflect and be supportive to each other,” says McCormack. Trainees and trainers at the college were offered access to HSE counselling support services. “It also opened up conversations about the importance of taking time off and how it can be difficult to adjust back into the system if you’re coming back after time out,” adds McCormack.

Ultimately, the message for all trainee doctors - whether in specialist training or still at undergraduate level is to remember the importance of being “happy, healthy carers”.

“Doctors have to look after their own health with good nutrition and exercise, a work/life balance while having a sense of being valued in their work environment. We have to recognize when there is a problem before someone reaches breaking point,” says Dr Kinirons.

Count your blessings: the benefits of gratitude
6