Why socks could be key for marathon runners 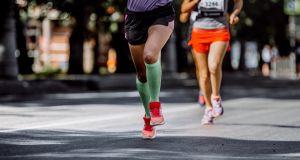 In 2016 Samsung reported on why socks go missing. Its survey of 2,000 British adults found that a person loses an average of 1.3 socks per month in the washing cycle, equalling – in Samsung’s breathless prose – “a whopping 1,264 socks lost over their lifetime!”

This sock horror finding is relevant to those preparing for this year’s SSE Airtricity Dublin Marathon, because next to good trainers should be matching high-quality socks. A further aspect to consider is that an increasingly popular item of specialist hosiery – compression socks – might even enhance performance.

Ivor O’Sullivan of Dublin-based Compression Socks told The Irish Times that the socks are “designed to improve blood circulation and reduce swelling to the lower legs. When circulation is improved, deoxygenated blood is cleansed of lactates, allowing for increased muscular power, less fatigue during performance and quicker recovery time. I have had positive feedback from Leinster Rugby and had a meeting with the head physio, who explained they use them post-exercise to aid recovery.”

The release of the enzyme creatine kinase (CK) into the bloodstream follows muscle-damaging exercise such as marathon running, and following endurance exercise venous blood tends to pool in the lower limbs, extending the excretion time of muscle damage waste products like CK and lactate. However, as an “old school” runner, who once used hairy twine to lace up his trainers, I’ve never worn compression socks.

But does published peer-reviewed evidence lend support to claims favouring their use?

In 2015, New Zealand researchers investigated whether wearing compression socks for 48 hours after a marathon would reduce venous pooling and improve functional recovery, as measured by a timed treadmill test a fortnight after the race. In the randomised control trial, 33 adult athletes were assigned to a compression sock or placebo group.

Writing in the Journal of Strength & Conditioning Research, the researchers reported: “In the compression group, average treadmill run to exhaustion time two weeks after the marathon increased by 2.6 per cent . . . In the placebo group, run to exhaustion time decreased by 3.4 per cent . . . This shows a significant beneficial effect of compression socks on recovery compared with placebo.”

And compression socks appear to have a role to play in reducing the risk of deep vein thrombosis (DVT).

Experiences such as prolonged air travel can activate the body’s coagulation system, raising the blood concentration of factors such as the thrombin/anti-thrombin complex (TAT), which can increase the risk of developing DVT, which is a blood clot, typically in the leg. A clot breaking loose could cause a stroke, heart attack or pulmonary embolism.

But in July this year Australian researchers – led by Dr Emma Zadow of the University of Tasmania – cited evidence demonstrating that although physical exercise appears to protect against DVT “the risk of an adverse event is compounded by underlying and acquired risk factors associated with hypercoagulability such as oral contraceptive use, long-haul travel [and] dehydration”.

In addition, they pointed out, marathon runners are “exposed to ‘running-specific’ risk factors increasing the risk for venous thrombosis generation through repetitive microtrauma resulting in foot strike haemolysis, dehydration, and endothelial damage, which could promote an increased concentration of TAT complexes”.

Dr Zadow’s team – writing in the European Journal of Applied Physiology – reported on “compression socks and the effects on coagulation and fibrinolytic activation during marathon running”. They recruited 67 participants in the 2016 Gold Coast Marathon, of whom 34 were allocated to a compression sock (foot-to-knee) group and 33 were controls. Blood samples drawn 24 hours before the race and immediately afterwards were analysed for the presence of TATs and other markers.

As expected, coagulation and fibrinolytic activation were observed in both sock and control groups, but significantly lowered activation was observed among runners assigned to the sock group. Commenting on the practical applications of their research, Dr Zadow’s team stated: “While compression socks are frequently used within the sporting industry to enhance exercise performance and aid recovery, the use of compression socks within endurance-based exercise may reduce the potential for thrombosis development . . . Therefore, the use of compression socks when completing a marathon run may benefit endurance-based athletes.”

The researchers acknowledge that limited investigations have been undertaken in this area of study to date and that further work is needed to confirm their findings. However, Ivor O’Sullivan says: “Runners are very savvy and know what equipment they need to improve performance. I expect the compression sock market will grow over the coming months and years as more people become aware of their benefits and affordable cost.”

A marathon is a serious undertaking for any individual, and those contemplating the purchase of compression socks should be aware that the website of Compressions Socks states that the product should not be used if individuals suffer from serious circulatory problems; leg swelling due to health problems; infection of the leg/phlebitis; diabetes; problems with nerves in the legs and feet leading to decreased sensation; open leg sores below the knee, or peripheral neuropathy.

Meanwhile, enjoy the marathon, and, as Kipling might have said of the washing-machine era:

“If you can keep your socks when all about you,