‘Deaf gain’: my enhanced abilities by virtue of having grown up deaf

I enjoy face-to-face interviews where I can not only lip-read, but gain clues via body language 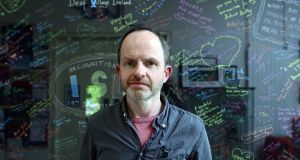 What are the good things about being deaf? Let me count the ways: I can pretend not to hear when someone tries to reminds me it’s my round; I can easily tune out of the cacophony generated in my home by my young children; and – best of all – I always get a good, uninterrupted night’s sleep.

I’m sure other writers in the Platform series will jokingly point to the incidental benefits of their own disabilities. But I say “jokingly” because most these so-called positives can’t be taken seriously; they serve merely to take the edge off things, or add humour to our stories, rather than balance out the many negatives of trying to navigate a world built almost exclusively for the able-bodied.

I could also point to a benefit of a different kind, which is knowing Irish sign language (ISL) and being a member of the strong-knit Irish deaf community. The beauty of this is that all the positives that accrue from knowing ISL and being part of the deaf community is not confined to deaf people.

To borrow a term coined by prominent Irish deaf academic Dr John Bosco Conama, ISL has valuable “social capital”. In other words, anyone can learn it as it’s language in its own right, and lots of people would like to. To date, this social capital has been somewhat untapped, but with the increasingly visibility of ISL with its recently acquired – and hard-won – status as an official language of the State, that will hopefully change.

Other deaf communities around the world, such as in the United States, have begun to popularise the concept of “deaf gain”, something that aims to challenge head-on the conventional view of deafness as being primarily about “hearing loss”.

So instead of focusing on what deaf people can’t do, it’s about focusing attention on enhanced abilities that many of us actually share by virtue of having grown up deaf, such as superior visual and spatial intelligence, better peripheral vision and our ability to read body language accurately.

Like the lab scientist who spots a crucial clue on a blood test scan with his naked eye that his supervisor completely missed. Or the nurse or doctor who can read patients’ body language and thereby engage better with them. Or the FBI adviser who can spot in interviews with suspects whether they are lying or not.

Of all the careers for which being deaf might feasibly be an advantage, journalism might not come to mind. But I’d wanted to be a journalist since my mid-teens, and while I entered my dream profession via a circuitous route many years ago, I was delighted.

I knew I’d always be restricted in terms of some of the more bread-and-butter aspects of reporting, such as council meetings, court sittings or Oireachtas proceedings, for which following what is said requires superhuman levels of concentration, not to mention being sure of seeing the speaker’s face, which can never be guaranteed. Even then, taking notes and lip-reading is difficult to do simultaneously, and poor quality acoustics can be the last straw in terms of meaningfully understanding the public mumblings of our politicians or legal professionals. (I could use an ISL interpreter now, but they cost a lot, they’re hard to get, and using one doesn’t resolve the practical issue of taking notes at the same time.)

So the upshot is that I don’t do a lot of hard news stuff. Most other journalism is no problem, though; press-conferences, feature-writing, investigations, reviews and previews, opinions, editorial, case studies, etc. I particularly enjoy any face-to-face interview where I can not only lip-read, but gain essential clues and context via the person’s body language as well as their voice. More often I interview over the phone and, while it’s not ideal, I cope.

That said, transcribing taped interviews is a task that every journalist hates but I have more reason to hate it than most. In fact, I often get a secretary to do it for me, at my own cost. As a freelancer, I’m still not brave enough to ask editors to subsidise this cost for me lest they stop giving me work, but on the positive side, new automated transcription services (eg Trint.com) are much better than they used to be, and are making things a bit cheaper.

The production side of print and digital media presents no obvious barriers, and I’ve some skin in that game, while a fellow deaf journalist worked many years as a senior sub-editor with a well-known broadsheet in London. She now works in broadcast journalism, something I know I would enjoy too, but I’ve haven’t been ruthless as I should be in branching into it. The same goes for journalism that mines social media.

If I ever think about leaving journalism (which is increasingly often), it’s because of the now-constant hand-wringing over the future of the media industry and, by extension, the desperate insecurity of journalism as a long-term career. If I didn’t enjoy it as much as I do, I would have left a long time ago.

There’s always PR – a popular industry for ex-journalists – but I had a short and ill-fated stint in that trade before I entered journalism.

Suffice to say I wasn’t very good at it, but more problematic for me was that anytime I got in contact with a journalist, I always found myself wishing dearly that I was in their shoes.