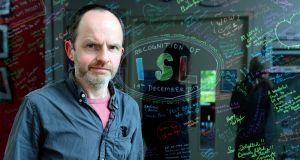 If you grew up with a disability, how does it define your identity today? Some might say it simply doesn’t influence their sense of self very much, or at all, while others fully acknowledge it – even embrace it.

Growing up profoundly deaf in a near-100 per cent hearing world, where it was all mainstream schools surrounded by family and friends who were all hearing, my deafness certainly shaped my identity – but it was all centred on pretending I wasn’t deaf, or trying to pass myself off as a hearing person.

Clearly, how you forge your own identity will be a very personal journey and no two stories will be alike. But there is an increasingly common thread running through the tales of more and more deaf people about how they found a positive disability identity.

For me, it all began when I left home to study at Dublin City University (DCU). There, I met and got to know another deaf student who was a year above me. While we had some things in common, the fact that he had attended a school for the deaf and was fluent in sign language meant that our experiences of growing up as deaf people were miles apart, in every sense of the word.

I found myself being intensely curious about this. So I sought out more deaf people. I started attending the local deaf club, made deaf friends and started learning Irish Sign Language (ISL). I made the Irish Deaf community the subject of my final year thesis at DCU, through which I learned about the emerging concept of a “Deaf” identity.

So what is a ‘Deaf’ identity?

Essentially, it’s about identifying as a deaf person, but where your deafness is defined more by your membership of a strong social and linguistic community rather than the fact of having a hearing loss.

You are “Deaf” rather than “deaf”.

There are many different ways to be deaf, but the most common denominators among those who claim a Deaf identity is that they were born deaf (or became deaf sometime before reaching adulthood), went to a deaf school, and use sign language as their first - or preferred - language.

They also have many friends (and sometimes family) who are Deaf and together they are part of a Deaf culture that is based on a shared language and shared values. The most significant of these values is they are happy and proud to be Deaf. They don’t see themselves as hearing people and have no interest in trying to be.

But there are more and more stories emerging of deaf people like me who grew up in a predominantly hearing world and attended mainstream schools but later found the Deaf community and sign language. In doing so they found their “true” identity or at least a missing piece of it.

However, a journey towards forging a Deaf identity can sometimes be a bumpy one, thanks to the tribal politics that can be found in any small community bound together by a common language and culture.

This was touched on to hilarious effect in a great play called Tribes, which did a two-week run at the Ambassador Theatre in Dublin late last year. One of the central characters is Sylvia, the new girlfriend of Billy, a deaf man who still lives with his hearing family. Sylvia is hearing and grew up with deaf parents, but she is also starting to go deaf herself.

When she meets Billy’s curious family for the first time, she explains about her status in the Deaf community. “I’m not deaf from birth so that makes me less good than someone who is. But I come from a very Deaf family, so that makes me more kosher. Billy’s at the top of the pile because he’s deaf from birth.” Billy, however, loses points because, until he met Sylvia, he didn’t sign. But that would change because, after years of trying to “fit” in the hearing world, he takes to sign language like a duck to water.

Indeed, if you strip away all these hierarchies of status, the only essential criterion for membership of the Irish Deaf community is a commitment to learning and mastering Irish Sign Language. You can even be a hearing person and be a member of the Deaf community as long as you can sign or at least show you are making serious efforts to learn it.

Along with many thousands of others, I was delighted when new legislation formally recognising Irish Sign Language as an official language of the State was finally passed last December after many years of campaigning by the community. The ISL Act (2017), among other things, seeks to raise the status of Irish Sign Language and promote greater access to fully qualified interpreters and information in ISL for Deaf people.

But I also sincerely hope it gives many more deaf, hard of hearing and hearing children and adults in Ireland who don’t yet know any ISL the spur to learn it and see how it can enrich their lives in so many ways, just as it has done with mine.