Should you feel safe in the Irish health system?

Having worked in the Irish health service for 20 years, I am damn proud of it. Yes, progress is painfully slow, but it is very real 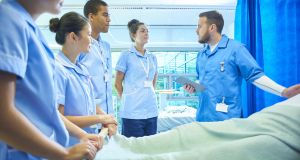 During the opening ceremony of the London 2012 Olympics, many were moved and delighted at the tribute paid to the NHS. I remember the recently ousted head of Ireland’s health service, Tony O’Brien, remarking at the time that his greatest ambition was to develop that sort of devotion to the HSE. If there were times when he thought he might be making progress, the last few months and his own fate during the cervical check controversy extinguished that hope.

Why is the NHS so close to British hearts? A quick review of the problems of the NHS reveals many reasons why it shouldn’t be: perennial underfunding, overcrowding in A&E, significant patient safety incidents and, in a bizarre coincidence, a screening programme error in which half-a-million women were not called back for mammograms.

And, yet, the trust and love the British public has for the NHS never wavers.

Of course, all of these problems sound terribly familiar to Irish citizens and that’s because modern healthcare is in crisis, not just on these isles but everywhere. And yet, over the summer, if you were to believe the outrage on display in Oireachtas committees and in the pages of newspapers and online blogs and tweets, you would be forgiven for believing the Irish health system is at best broken beyond repair and at worst complicit in the manslaughter of Irish women.

In 1991, the Harvard Practice Study revealed that, of nearly three million admissions to New York hospitals, almost 100,000 were victims of avoidable error, 13,000 of whom died due to the harm caused. This gave birth to the patient safety movement, which has spread globally.

In Ireland, the patient safety era dawned mired in the controversy of missed and delayed diagnosis in various forms of cancer. Then minister for health Mary Harney, working with officials in the Department of Health, signed the patient safety charter in 2010 with full knowledge of the battles ahead.

They persuaded Dr Tom Keane, who had reorganised cancers services in Canada, to come home to advise on the changes required to improve safety and survival. Centralising cancer service has saved many lives, but at the time politicians saw no downside to bashing the health service – always taking care not to include the front-line staff, but excoriating the “suits” and the “unaccountable managers”.

It was the start of a long road of confidence-busting in Irish healthcare.

To be sure, there were many disclosures of poor practice: Brigid McCole, Susie Long, Áras Attracta, Leas Cross, Savita Halappanavar, waiting lists for specialist treatment, the 15-year “crisis” in ED overcrowding. What the media and politicians failed to see was that such disclosures were part of the improved scrutiny of medical care by both the health system in auditing itself, and also by brave and courageous citizens. And yet, progress has been frustratingly slow and commentators justifiably search for perpetrators of the stagnant culture; it’s the “civil servants” the “rich consultants” – sometimes the nurses even get blamed.

The fact is, blame is easy, but solutions are not.

The supreme irony is that the cervical screening programme is almost the last service that one would point to as dangerous or poorly performing. In the decade or so since its launch, it has saved hundreds of lives. And, as I and others predicted, the Scally report did not find the service to have fallen below international standards of reporting. While Cervical Check and the patients’ doctors were excoriated for the delay and methods of disclosure of the audit results, it has been overlooked that of the 17 countries in the EU that screen for cervical cancer, only 10 do audits and only the UK discloses results.

Recently, in the British Medical Journal, Prof Jeffrey Braithwaite, a world authority on health systems design, summed up the problem for healthcare in industrialised nations: “Only 50-60 per cent of time is care truly evidence-based, about one-third of medicine is waste or overtreatment, and adverse events affect one in 10 patients and have done so for the past 25 years without significant improvement.” In an effort to explain this, he points out that healthcare is the most complex thing we do: sending rockets to the moon does not even come close; each and every patient interaction has as much complexity and is at least as potentially lethal.

There are literally millions of healthcare interactions of this sort every year in Ireland. In the end, Prof Braithwaite’s prescription for change is not to re-draw the organisational chart and fire all the managers. Instead, he asks that we use the evidence of what works and always use local solutions to local problems: engage staff and patients in understanding how to interact in such a way that the contract of care is about love and compassion, safety and courage, learning and evidence-based care.

I have been in medical practice since the Harvard Practice Study. For the last eight years, I have been working with managers and clinicians in the Irish health system to improve care in epilepsy services. My, albeit biased, observations are that, as a result of this renewed focus on safety, my practice is almost unrecognisable from what it was a decade ago: teamwork; patient centeredness (taking patient’s wishes and opinions as central to care); patient safety (recording and mitigating error and harm); integrating care across the primary care, community care and hospitals; constantly implementing new care models and new technology; and finally, recognising that the underserved, the poor and the nameless are often disproportionately affected by poorly performing services – this is what our business is about today.

Progress is, of course, painfully slow but it is real.

In May 2018, medical journal The Lancet published a large study of access and quality in the world’s health systems. Ireland placed 11th of 195 countries – 12 places ahead of the NHS!

In the end, I don’t know if Tony O’Brien’s vision for a health service that we can all be proud of will ever be realised in the minds of our citizens. I can only speak for myself as one citizen who has had the privilege to work in the Irish system for 20 years. I am damn proud of it! I am pained by our failures when they hurt our patients, at times embarrassed by inefficiency, frustrated by the slowness of change yet never doubting for a moment the direction we are going and filled with admiration for the efforts I see around me – from the simple kindness of a word of comfort to the large-scale efforts at changing care.

Should you feel safe in the Irish health system? The answer is: you can feel safer today than you ever could before but there is much more work to be done; for this we need your help and your support.