Apple has managed to work its manipulative tentacles around the computer chips that live inside my head: my new cochlear implant connects wirelessly – via bluetooth – to my phone 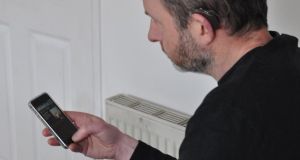 I’m an Apple user, but I’m not a fanboy. Yes, I have a six-year old Macbook that works really well, and an even older iPad that was a gift, but I generally choose devices based on their own merits.

Until recently, I had a perfectly good Samsung smartphone running on Android which – psychologically at least – made me feel like there was some ‘balance’ in my tech universe.

But I was successfully, if reluctantly, prompted to become the owner of an iPhone. Certainly not the bells-and-whistles iPhone X, but the smallest, cheapest one.

I really didn’t want one for a whole variety of reasons, but the fact is that Apple has managed to work its manipulative tentacles around not just my personal digital eco-system, but the computer chips that live inside my head.

I have a cochlear implant, an electronic device that helps profoundly deaf people like me to hear, particularly if hearing aids no longer provide any benefit.

It comes in two parts: an external processor that looks much like a hearing aid that connects (via magnets) to a very slim internal computer device surgically inserted into a part of my auditory nervous system called the cochlea, with the rest of it seated under the skin of my skull. Whereas a hearing aid takes in sound, digitises it and literally blasts it into your ear, a CI processor does the same thing except the digital signals are transmitted to the internal device and then directly into the cochlea as a series of electrical pulses.

Remarkable as it sounds today, the technology was actually first invented back in the 1970s. But even after 40 years of successive evolutions, no one fully understands quite why this device works so well for so many people and yet not quite so well for others. A lot has to do with the brain’s remarkable neural ‘plasticity’, but also other factors including how deaf you are and the history of your deafness. Even then, it’s hard to predict how well any implantee will do.

So what does a company such as Apple have to do with cochlear implants?

Well, the company that makes my own device, an Australian firm called Cochlear, recently teamed up with the tech giant to enable its latest generation of processor (called the N7), to connect wirelessly – via bluetooth – to an iPhone.

Since the good folks at the Beaumont Hospital National Cochlear Implant Programme upgraded me to an N7 processor a few weeks ago, this means I can now stream music, audio and phone calls from my iPhone directly and wirelessly to my processor. So I could be sitting on the bus nodding my head to the rhythm of Radiohead, but my fellow passengers would have no idea because I’m not wearing anything resembling a headset.

But the sound quality via the bluetooth connection is better than with any phone I’ve used previously, so the switch has been been worth it for this alone.

Technology-wise, however, this new feature of the N7 is not exactly revolutionary. Many of today’s hearing aids, which share some common components with cochlear implant processors, are already ‘iPhone-compatible’.

But the fact that a firm like Cochlear has seen fit to make its N7 processor iPhone-compatible does hint at how commoditised or mainstream even highly specialised devices like cochlear implants are becoming.

If you satisfy the criteria for an implant, you can expect to have to choose between two or three different brands. This remains a hugely difficult decision because almost all current cochlear implant users have only ever experienced one brand, so who can say which is better than the other in terms of sound quality?

But academic research on users does suggest there’s not much in it, so in recent years implant manufacturers have tried to find features and functionality based on mainstream technology that gives their products added value or a competitive edge.

However, it’s hard to avoid the conclusion that Cochlear has paid a bit of a ransom to Apple in return for iPhone compatibility.

Why? One or two of the more useful advanced settings that users of Cochlear-made CI devices could play around with on previous generations of processors (like my old N5) has been stripped out for the N7 and is available only on the accompanying iPhone app. So that’s another – annoying – reason why I decided to change to an iPhone.

Having said all this, my sister-in-law, Emer, was genuinely gobsmacked to learn about my new N7’s most useful feature. “So I could take your iPhone into the next room, play something on it and only you could hear it?” she asks.

Yes, I reply smugly, before suddenly realising something shocking. And when I look over at Emer again, I can see it in her eyes too.

I could be hacked. Eeek.

‘Moving overseas is daunting, but he took it in his stride’: An Irish woman walks for her dad
4

How to cook Christmas: Turkey and ham made easy
5

Andrew Jackson: the most Irish American president, and a divisive US leader
Real news has value SUBSCRIBE