Why does Netflix have a problem in telling it like it is in subtitles?

Subtitling by Netflix and others is unsatisfactory, especially for those who depend on it 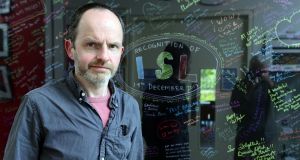 John Cradden at the Deaf Village Ireland: “Subtitling best practice is that every word that is uttered on a programme should be displayed for deaf viewers to see and comprehend.” Photograph: Cyril Byrne

I remember clearly the day, sometime back in the late 1970s, when my dad brought home a new TV with an intriguing new feature: teletext. Besides the novelty of seeing news and information in colourful, blocky text via BBC’s Ceefax, ITV’s Oracle and RTÉ’s Aertel teletext service, it provided for the closed caption subtitling of popular TV shows for the first time.

Late 1970s and early 1980s Northern Ireland was a bleak place in terms of popular culture, so the TV was an important medium. But I would have struggled to follow much of it, even with the sound turned up. I couldn’t follow the radio to any meaningful degree, either, so the introduction of subtitling via this new-fangled teletext service made a monumental difference to my enjoyment of television.

All of a sudden shows such as Doctor Who, which I had been intrigued by if not totally engaged with (it’s hard to lip-read a Dalek, after all), suddenly became an obsession.

But the service was rarely perfect and was very patchy for a long time. Worse still, technical issues meant that were often interminable delays between what we might hear and what we read on the screen.

But while old-school teletext died with the switching off of the analogue TV signal in 2012, TV subtitling has become very much a mainstream service today. It’s been shown not just to benefit deaf and hard of hearing. A study from a few years back by UK broadcasting regulator Ofcom showed that 80 per cent of TV viewers who used subtitling services had no hearing loss at all.

This is of no surprise to me – just ask my (hearing) wife. Among the reasons for this popularity among non-deaf viewers:

1) English might be not their first language;
2) to allow them to follow something on a TV being viewed in noisy environments, or without disturbing or distracting others;
and
3) to enable them to understand dialogue that might be spoken very quickly, with accents, mumbling or background noise.

So it’s a bit maddening to learn that, some 40-odd years after the introduction of teletext 888 subtitles, Netflix has come in for heavy criticism over a practice that those early teletext-based subtitling services were once guilty of: altering or editing captions.

A mini-Twitter storm was generated when viewers of Netflix complained about the service misrepresenting, censoring and simplifying dialogue from a variety of shows, including Queer Eye. They reported that the series’ captions were being altered, supposedly for clarity. In other episodes, any expletives that were uttered would often not display, presumably in a misguided concern over the delicate sensibilities of deaf people.

This method can struggle with things like unusual names of people, such as the ex-Manchester United footballer Adnan Januzaj, who famously became “Janet Jazz Jazz Jam”

In fairness, those who wrote the subtitles for the early teletext 888 service used to do the same thing until viewers, too, gave them hell and they got the message. But it seems that on-demand services are making many of the same mistakes again.

Subtitling best practice – as it should be understood by now – is that every word that is uttered on a programme should be displayed for deaf viewers to see and comprehend. Anything less is disrespectful, even condescending, those of us who rely on it. It’s also not the job of subtitling or captioning services to “clean up” language.

While Netflix did respond to say that it would investigate these issues, it has shone a spotlight on how poor many on-demand services, including Sky and Amazon, have been on subtitling.

Part of the issue is that in many countries including Ireland, on-demand services are not yet subject to the same regulations as traditional broadcasters, including with regards to accessibility. (Or if they are, they are still playing catch-up.) In the United Kingdom, a survey by deaf charity Action on Hearing Loss found that three-quarters of deaf viewers had purchased or subscribed to shows and started watching them only to find they couldn’t view them.

All too often the industry will trot out the same, tired excuses about technical issues that they say make the provision of subtitling difficult, but while such excuses weren’t acceptable to us before, they’re certainly not acceptable now.

If you have issues with subtitling quantity as well as quality, it might interest you to know that the Broadcasting Authority of Ireland has just launched a public consultation (closing July 27th) on its access rules, which govern the amount of subtitling, Irish sign language and audio description Irish TV broadcasters must offer to the public. It is proposing to set specific target figures for the proportion of these services that broadcasters must provide, rather than the current “target ranges”, which sounds like a good move.

In the meantime, you could try to cheer yourself up by spotting those hilarious mistakes that too often crop up with live subtitling, which is typically provided not by people with stenography skills, but by folks who sit in a soundproofed room watching the TV feed and “re-speaking” the words from the programme into a microphone, which are then translated by speech recognition software.

Until more accurate subtitling technology is developed, this method can struggle with things like unusual names of people, such as the ex-Manchester United footballer Adnan Januzaj, who famously became “Janet Jazz Jazz Jam”.