Do we really need food supplements to stay healthy?

The vitamins and minerals contained in whole foods has a more positive impact on our health than nutrients taken in isolation, a recent conference was told 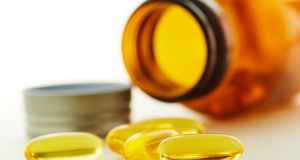 The most popular supplements include vitamin C, fish oils, and the ubiquitous multivitamin. Photograph: iStock

Whether it’s a multivitamin or a protein shake, there’s every chance you are taking or have taken some form of food supplement. Indeed, 50 per cent of us are taking a dietary supplement at any one time, and more than a third have taken one at one point or another.

But do we really need supplements and are they the key to maintaining or improving health that many of us believe them to be?

When it comes to dietary supplements, those who are taking them tend to be those who need them least. Furthermore, nutrients taken in isolation may not have the positive impact on our health that a whole food does.

These were some of the salient points made at a recent event entitled “Dietary supplements – where do they fit in human health and performance?” The event, jointly hosted by the Irish Nutrition and Dietetics Institute (INDI) and the National Dairy Council, sought to present the latest insights on this controversial area.

Focusing on food supplements is effectively dietary myopia, according to Prof Michelle McKinley of the Centre for Public Health at Queen’s University Belfast. In her talk on whole foods versus supplements, she said we are “missing the bigger picture” by looking at individual nutrients.

If you look at shelves in supermarkets, health food shops, pharmacists, you’ll see a wide range of things that fall under this broad definition of supplements

McKinley explained that the official definition of supplements is broad – it can include anything said to have a nutritional or physiological effect, and that comes in dose form, such as capsules, pastilles, tablets, pills, sachets of powder, ampoules of liquids, drops, etc.

“If you look at shelves in supermarkets, health food shops, pharmacists, you’ll see a wide range of things that fall under this broad definition of supplements,” she said, adding that the most popular supplements include vitamin C, fish oils, and the ubiquitous multivitamin.

McKinley described recent UK research which determined that just 18 per cent of people had never taken a supplement, while 34 per cent had previously taken at least one. Forty-eight per cent said they were currently taking some form of supplement. These tend to belong to older age groups, be female and are often of higher socioeconomic status, she said.

“From a public health perspective, it’s the people who don’t need them who are taking the supplements,” she added.

Reducing the risk of heart disease

According to McKinley, back in the ’70s and ’80s, epidemiological evidence (mainly from observational studies) began to emerge, suggesting antioxidants were playing a role in reducing the risk of heart disease. “Yet, large-scale interventional research has since shown that there is no positive impact of antioxidant supplementation on the risk of cardiovascular disease,” she said.

A large meta analysis – a review of all the available evidence – published in 2003 categorically showed there was no reduction in cardiovascular risk in people who had taken antioxidant supplements such as vitamin E or beta-carotene. A more recent trial found that supplementation with multivitamins, vitamin D, calcium, and vitamin C did not reduce the incidence of heart disease, or death from any cause.

Yet, foods containing these micronutrients are undeniably beneficial to health. McKinley explained this is where the concept of the so-called “food matrix” comes in – the theory that a whole food is greater than the sum of its parts.

“One of the key questions that came out of these antioxidant studies was how realistic it was to see an effect with one or two micronutrients, rather than whole foods, which are a complex structure of micronutrients and macronutrients,” she said. “We had to ask, do single antioxidants behave differently outside the food matrix, eg are whole fruit and vegetables more effective?”

Indeed, by only looking at individual nutrients, we may be missing out on the potential effects of foods, food groups, and whole diets in relation to disease prevention, she added. “It’s not that we don’t need nutrients, but with foods, we prepare them, and we cook them in different ways, we eat them in different combinations. So, it is logical to think that a whole food would have a different effect than a single nutrient on health,” she explained.

The dairy matrix hypothesis has been the subject of intense research and debate in recent years. This proposes that the health effects of dairy foods are a function of the interaction between the physical structure of the food and the nutrient and bioactive constituents within it, meaning that the whole is greater than the sum of the parts, said McKinley.

“This suggests that the benefits you get from the whole food is greater than you will get from consuming, for example, just a calcium supplement. There’s a good premise for this when you consider how complex and unique milk and dairy foods are in terms of their nutrient structure.”

Milk and dairy are more than just calcium, said McKinley. “They consist of a high-quality protein, bioactive peptides, 400 different fatty acids, lactose, and more than eight vitamins and five minerals, as well as fermented products.”

One study exploring weight-management that included four different groups, given normal cow’s milk, soy “milk”, a calcium supplement or a control diet, respectively, showed no significant differences in changes in body weight and body mass index (BMI) between the soy milk or calcium supplement groups compared to control, said McKinley. However, reductions in weight and BMI were significantly greater in the milk group compared to the control.

This effect is replicated with different outcomes: one major study showed that cheese was more beneficial for increasing bone mineral density than a calcium supplement, while another showed no favourable changes in bone density with calcium supplementation compared with significant improvements in those taking dairy foods.

“Supplements cannot mimic the effects of the food matrix. Foods and whole dietary patterns have beneficial effects on health that aren’t seen with supplements,” said McKinley.

She added that supplements do have a role to play in correcting deficiencies and optimising nutritional status in specific circumstances – the only two supplements recommended in terms of food policy in Ireland are vitamin D for babies aged 0-12 months and folic acid for three months prior to conceiving and the first three months of pregnancy.

And there are downsides to taking supplements – some 4 per cent of people taking them are exceeding the dosage guidelines. Issues with safety/contamination and interactions with medications are of concern. Their cost also contributes to widening health inequalities, said McKinley.

The darker side to Dublin’s history
8