‘I encourage women to be a birthzilla, if necessary’ 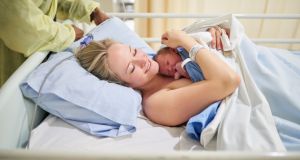 ‘Your birth experience matters to you. You’ll remember it for the rest of your life, and you have every right to be the key decision maker in that room.’ Photograph: iStock

In April of this year, RTÉ’s phone-in show Liveline invited Irish women to share their stories of giving birth in Irish hospitals. With the dam effectively busted, dozens of women recounted the horrific injuries they’d suffered during a traumatic birth. Others mentioned post-traumatic stress disorder, having emergency C-sections they didn’t want, being told baldly about a baby’s deteriorating condition or death and, in the words of one listener, being “treated like a slab of meat”.

The show resulted in a more open conversation around maternal power, control and agency in maternity hospitals, with the HSE issuing an apology to the many women “where our service has failed to meet their expectations”.

Over in the United Kingdom, Milli Hill also felt a loss of personal agency when she had her first child Bess, now 11.

“Basically, I went past my due date,” she explains. “I don’t think I had a massively traumatic labour, but I probably could have been given more time. At a time when you’re trying to get your confidence up and believe in yourself, I was very afraid of giving birth and I felt I was already failing as I wasn’t going into labour. I’d wanted a homebirth, but in the end I had a forceps delivery.”

Hill, a journalist and columnist, founded the Positive Birth Movement, an online network which mushroomed into a global network of 450 antenatal groups (there are 200 groups in the UK and five in Ireland). She released the bestseller The Positive Birth Book in March, 2017; its follow-up, Give Birth Like a Feminist, has just hit the shelves (via HarperCollins).

“Talking to new mums, I heard a lot of language around permission, and people seemed to pepper their stories with ‘I wasn’t allowed to do that’ and ‘they wouldn’t let me’,” she adds. “It amazed me how many different stories I heard, because different parts of the UK have different policies, and I knew that social media could connect women up beyond their immediate circle.”

Speaking of the Liveline outpouring of birth stories, Hill notes, “It was quite a phenomenon, wasn’t it? It really unleashed something. It’s not just a problem in Ireland of course, but it’s quite intense in Ireland. You’ve got that merging of religion and state and the Eighth Amendment being repealed, which has its own legacy. It reaches into issues of consent, too, and it gives a particularly intense flavour to birth in Ireland.”

A rousing call to arms, Give Birth Like a Feminist sees Hill urge readers to start and continue a clear-eyed conversation around feminism and childbirth. She primarily encourages women to know their rights during childbirth, and to become the key decision makers in their own childbirth experience.

Maternity units insist on policies and protocols that focus on the survival of mother and baby, but often ignore the experience of childbirth as a meaningful and spiritual experience, and if they so desire, mums should reclaim that side of the childbirth experience. Yet as Hill notes, we as a society have some way to go before this happens.

“I think it’s that old idea, steeped in the patriarchy, that the woman is a vessel, and as a mum you have to make a sacrifice on the altar of motherhood and put up with whatever it takes,” Hill explains. “A lot of that can be very silencing for women. We’ve been told that what happens isn’t important as long as everyone is alive at the end, but if you say it does matter, you risk looking like you don’t care [about having a healthy baby]. It’s sort of complicated.”

By way of example, she recounts one instance that stands out in recent memory.

“One woman I spoke to recently was in a birth pool during a home birth, and her midwife wanted to examine her and the women felt that her labour was established and she didn’t want to have an examination,” Hill recalls. “The midwife turned to her husband and said, ‘tell her she’s got to have this exam’, so he got roped into the conversation. She got out and had the examination that she found uncomfortable. She had a lot of unpacking to do about it after the birth, and they also did as a couple. She decided to make a complaint. The senior midwife she spoke to simply said, ‘well, it needed to be finished’.”

The narrative around women who want to take control and have more of a say in their own birthing experience is, says Hill, seeped in misogyny.

“There’s a sense that anyone who has tried to take control of a childbirth scenario, other than a profession, is a misguided, dangerous and mad woman,” observes Hill. “Being a ‘birthzilla’ is supposedly a bad thing, but I encourage women to be a birthzilla, if necessary. If it means using your voice, why should you have to apologise for it?”

In Give Birth Like a Feminist, Hill writes: “‘Laminated’ birth plans (which, in reality, I am yet to come across) seem to stand as a metaphor for a really organised and strong-minded women who misguidedly thinks she can have any power in the birth room.”

And even though the Eighth Amendment has been repealed in Ireland, “women’s rights in birth still have a long way to go”.

Hill also writes about how in early 2018, Dublin doctor Aoife Mullally spoke at a maternity conference and “described women who make birth plans as ‘middle-class birthzillas’, adding that her audience of fellow birth workers would know the women because we’ve all had them, and who ‘think they are the only woman who’s ever given birth and they certainly think they are the only woman giving birth in the labour ward that day’.”

Hill acknowledges that the healthcare system, in the UK at least, is overstretched, “but there’s this idea that women get fixated on one kind of birth, and that’s simply not my experience,” says Hill. “Women are pretty smart and know they can’t always have birth the way they might like. But if you create a birth plan, it all ties in with being a diva and having expectations that are too high, and if you do feel traumatised afterwards, it’s like, ‘well, you shouldn’t have gotten so obsessed with the idea of a water birth’. And then a woman feels like it’s her fault when she feels bad. No, you didn’t get proper care – that’s why you’re traumatised.”

Yet what of the idea that different types of childbirth and delivery are subject to elitism, and are shuffled into a hierarchy? That one type of birth is seen as “better” or more noble, than the other?

“It’s a bit mysterious,” muses Hill. “Whatever choice you make, you will get criticised. It’s unfortunate if one birth is held up over another. Most women just want to have a straightforward, natural birth, but what’s right of one woman isn’t for another.

“A positive birth experience comes in many forms, and lots of conversations about all types of birth need to be had,” she adds. “And in fact, there are lots of pioneers practicing woman-centred caesareans. They treat the process in a more reverent way – they don’t have the radio or and they don’t chat about football – they remember that this is a very important moment in a woman’s life. They aim to make it feel like more of a special event, rather than a surgical procedure.”

Hill advises that mothers shouldn’t buy into the idea that it’s pointless to even create a birth plan: “There’s never any situation in life where it isn’t a good idea to be informed,” she notes. “There isn’t a recipe for the perfect birth, but there are ways you can certainly maximise your chances of having one. Get as much information as possible about your human rights in childbirth. You have a right to bodily autonomy, consent and the right to receive safe support and care. You have a right to privacy and confidentiality, and you have the freedom to make choices in birth, even if others don’t agree with those choices. It’s also important to stress that the majority of women are keen to put a baby first in a childbirth situation.

“Have a sense of entitlement about yourself as a person who matters,” Hill surmises. “Your birth experience matters to you. You’ll remember it for the rest of your life, and you have every right to be the key decision maker in that room.”