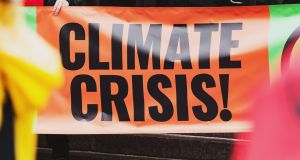 Rather than being overwhelmed by the powerful emotions that are evoked by climate breakdown, we can channel them into constructive action. Photograph: iStock

“Right now we are facing a manmade disaster of global scale, our greatest threat in thousands of years: climate change. If we don’t take action, the collapse of our civilisations and the extinction of much of the natural world is on the horizon.”
- David Attenborough

Over the last year, the penny has begun to collectively drop about the severity of the climate emergency and biodiversity collapse that surrounds us. This is thanks to the efforts of the extinction rebellion, the young climate strikers and heroic work of Greta Thunberg.

In the recent Irish Times/ Ipsos MRBI opinion poll 55 per cent of voters  agreed that climate change is the most serious issue facing the world.

So far this year we have been confronted with a worldwide heat wave, unprecedented fires in the Arctic Circle and the Amazon and record melting in Greenland’s ice sheet. And we know the situation will continue to get much worse unless transformational action is taken. As the ice melts, our cities will be flooded, as heatwaves become more common, huge tracts of land will be uninhabitable, as the climate becomes more unstable, our global food production will plummet and all around us many parts of our beautiful natural world with be lost forever. Never has the consensus of science been clearer, nor the gravity of the situation facing us so stark.

The emotional impact of existential threat posed by climate breakdown is taking its toll on people’s mental health. Health professionals such as those in the Climate Psychology Alliance report a widespread increase in “eco-anxiety” and distress directly related to what is happening to the planet. There is a growing depression and sadness about the damage already done and increased anxiety and worry about what is to come in the future. People feel overwhelmed by the scale of the problems we face, guilty about what they are not doing and many find themselves sinking into despair and hopelessness. Those connected to nature report feelings of grief and intense sadness at the ongoing destruction of the natural world as hundreds of species go extinct every year.

Whether we respond effectively to the unprecedented threat we now face will be determined not just by rational argument and science but also by how we handle our collective emotions and how we communicate our distressed feelings to one another.

Despite the science being clear for decades, we so far have responded abysmally to the climate breakdown that was predicted. In fact, we have rapidly made the situation exponentially worse, rapidly increasing consumption and carbon emissions as well as destroying forests, wetlands and the rest of the natural world on which we depend. How can this be? How can we be acting so irrationally?

One explanation is in how we are driven by our primitive emotions and instincts rather than by rational, thoughtful responses. The fear and terror associated with accepting the reality of climate breakdown is so great that we will do all we can to deny it. We will listen to unscientific climate sceptics because they tell us we have nothing to worry about so we can put off the fear and pain for a bit longer. We can’t bear to face the reality of just how drastically our lives and those of our children will be impacted and how much our lifestyles would have to change to give us even a small chance of mitigating the worst effects of climate breakdown.

As the threat grows, so does our anger, which is some cases is misdirected at those who tell us the truth about the climate emergency. One of the most shocking (though not surprising) reactions to Greta Thunberg’s simple message that we should listen to science has been the attempts to ridicule her or patronise her as mentally ill. This is the common psychological reaction to someone communicating an uncomfortable truth – we shoot the messenger rather than listen to the message. If the messenger is ridiculed, then we don’t have to believe them and we can put off the pain of facing reality for a bit longer.

In addition, those engaged daily in the reality of climate emergency such as scientists and activists find themselves overwhelmed by the emotional impact of these threats. The gravity of the problems and the scale of the solutions needed can leave them feeling hopeless and full of despair. Many report being overwhelmed and burnt out and this can prevent them from not only continuing to effectively do their job but also disturb their mental health and daily living.

Accepting and channelling our emotions

Our understandable emotional reaction to the existential threat we face does not have to cause us to react negatively nor to disable us from responding effectively. The first step is to muster the courage to accept the reality of our situation. Rather than engaging in denial or wishful thinking, we have to bravely face our fears head on. Then we will be in a position to respond thoughtfully and to set goals to work for what is possible.

Rather than being overwhelmed by the powerful emotions that are evoked by climate breakdown, we can channel them into constructive action. We can notice our anger and rage at what is happening in the world but carefully focus this anger towards creating the changes that are needed. Our anger is a rational and valid reaction to the science and can move us out of despair and inertia so we can work for a better world.

Rather than denying our grief and sadness at the loss of the natural world, we can also be inspired to appreciate the beauty of what is around us. Then we can take responsibility for the damage we have done and redouble efforts to preserve what is left.

Rather than fearing the loss of our consumerist lifestyles, we can realise that there is a simpler and fairer sustainable life to be lived that is more connected to our families and local communities. But we have to be brave to move towards it.

Finally, the most important step is to begin to have these honest conversations with each other. Rather than feeling alone in our eco-anxiety, it is time to reach out to each other for support.

Then there is real hope for change.

– This is the first article in the Changing World, Changing Minds series which explores our emotional response to the climate emergency and biodiversity collapse that surrounds us.
Part 1: Eco-anxiety
Part 2: Denial
Part 3: Channelling anger
Part 4: Coping with grief
Part 5: Talking to children

Live beside the Edge in docklands penthouse for €1.7m
8