Messages for new mothers: help is at hand 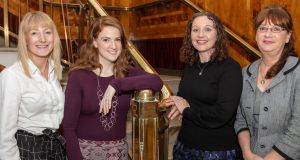 “Motherhood is an amazing, overwhelming experience but new mothers are bombarded daily by inaccurate information on social media which heaps on the pressures,” says Moira McLoughlin, a new mother who took part in the development of new resources on the mental, physical and sexual health of women during pregnancy and following the birth of their babies.

Dr Deirdre Daly, assistant professor of midwifery at Trinity College Dublin school of nursing and midwifery, says: “We stop focusing on women’s health after the birth as the attention shifts from the mother to the baby. This creates a natural silence in which sensitive health issues aren’t talked about.”

The Messages for Mothers Massive Open Online Course (MOOC) – which was launched by the school of nursing and midwifery at Trinity on Monday, October 21st – aims to give mothers reliable and trustworthy information about the “common but not normal” health issues that many mothers face following the birth of their baby.

McLoughlin, who has since trained as an antenatal teacher, adds: “New motherhood is such a steep learning curve, yet society expects new mothers to bounce back without strategies and honest, factual information about the health issues they face.”

She says that when she had her first baby in 2013, there was very little spoken about issues such as postnatal depression. “Women are also told too many anecdotes and jokes about not being able to jump on the trampoline with their children – but urinary incontinence is not a joke. It’s important to recognise what’s normal and what’s not and have the confidence to speak out about health issues and know where to seek professional help,” adds McLoughlin.

Urinary incontinence is a hugely under-discussed physical health issue that affects a high percentage of women before, during and after pregnancy. Yet often because it can be embarrassing to talk about, many GPs and public health nurses don’t give new mothers enough advice and information on how to deal with it.

The Messages for Mothers resource presents clear explanations about the crucial role of strong pelvic floor muscles in preventing and treating urinary incontinence, a YouTube video explaining how to do pelvic floor muscle exercises properly, in which one woman speaks about her experience of urinary incontinence, and there’s a downloadable tracker so women can incorporate these exercises into their daily lives.

Naomi Donaldson, another mother who took part in the development of the Messages for Mothers resources, says that when her son, Evan, was born, she felt lost. “I felt really lonely and guilty that I didn’t know what to do. I told the public health nurse that I was really exhausted and she said all new mothers are exhausted. Partaking in this study was the first time I felt someone cared about me and answered the questions I was afraid to ask.”

Jessica who also participated in the research believes that nobody is willing to be honest about childbirth and early motherhood until the baby is born. “It is one of the most unprepared experiences of your life. It’s like a secret club that you’re not inducted into until you’re already in it, by which time, you might already be traumatised because you weren’t adequately prepared. I wish there was more open dialogue and honesty about childbirth and how tough it can be.”

Each woman who took part in the research that informed the Messages for Mothers resources filled in detailed questionnaires about their physical, mental and sexual health during pregnancy and up to 12 months after their babies were born. As well as the input from new mothers, a women’s health physiotherapist, a perinatal psychiatrist, and experts in mental health, sexual health and domestic violence contributed to the online resources. Modules on the MOOC include mental health, urinary and faecal incontinence, wound healing and care, body changes, sexual health, mastitis and pelvic girdle pain.

Dr Daly says many women experience pain when they resume sexual intercourse after giving birth. “The resources give tips on self-help and information about what point you need to speak to your doctor, public health nurse, midwife or women’s health physiotherapist.”

Ellen McEvoy, another mother who was involved in the research, says there were lots of things she wished she had known about childbirth and new motherhood. “The transition into motherhood needs to be better. I felt lonelier than I ever could have imagined I’d feel. I feared everything in the world yet most of it wouldn’t happen. I wished I’d been more familiar with what being induced would be like and I wish I’d known to take the laxative after childbirth.”

McEvoy, who sought help for anxiety several months after her baby was born, says conversations with women after they become mothers need to be more open. “I wasn’t great when I became a mother. I didn’t fall in love with my baby straight away. Reaching out for help was the most important thing I did and I now want to help support a generation of mothers.”