Life has a funny way of throwing curveballs at you, sometimes in front of the car you’re driving 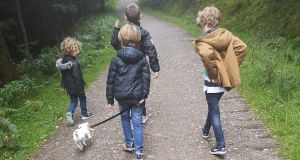 Jen’s children with the new dog.

The pleading from the kids continued all summer, but the terms and conditions of acceptance weren’t met. They wanted a new dog. I wanted them to put their dirty socks and underwear in the laundry basket, and keep their rooms generally tidy.

The continuing treasure trail of children’s smalls illustrated that the demands were too high. I was a hard taskmaster setting obviously unattainable targets.

But as the weeks progressed and the return to school, Montessori and the dreaded silent mornings loomed, I found myself wanting to get a dog anyway. It had been two years since Rodney, our beautiful border collie cross, had died. Like the kids, I felt ready for another pet.

There is too much human poo in my life already. I wasn’t adding the dog variety to it.

But himself was vehemently against it. “No way,” he said. “I just don’t have time to take on a dog, and sure if we can’t get the kids to pick up after themselves, what chance is there of them taking care of a dog.”

“Besides,” he said, playing the trump card “who’ll clean up the dog poo?”

He had won. There is too much human poo in my life already. I wasn’t adding the dog variety to it.

Except life has a funny way of throwing curveballs at you, sometimes in front of the car you’re driving.

I appear to have acquired a new dog and I’m not even sure I like her.

As the winds howled and the heavens opened, my husband offered to drive my friend and I to our school reunion. A small pup ran out in the road, just narrowly avoiding being hit by us. Dicing with death once proved not to be enough adventure for her and she attempted to cross the road again, this time resulting in another poor unsuspecting driver slamming on the brakes – just in time.

Himself hopped out of the car to check on the tiny dog with no road sense. He walked up and down the street to see if he could find anyone looking for a missing dog. “We can’t leave him out there,” he said. “He’s soaked through and shivering.”

My nana had a Jack Russell – a horrible, dislikable, cranky dog with a penchant for ankle nipping, growling and barking. She adored him.

“Well in that case Marlene is the obvious name.” he laughed, keeping with our Only Fools and Horses pet-naming theme. “She has no collar anyway. I wonder if she has been abandoned,” he mused.

“Well we can’t keep her,” I insisted. “For one she’s obviously part Jack Russell. ”

My nana had a Jack Russell – a horrible, dislikable, cranky dog with a penchant for ankle nipping, growling and barking.

I continued on to my school reunion and my husband returned home with the dog. An hour later, while I was reminiscing of times past and Kelly-green uniforms, a selfie of my husband looking proud as punch with the freshly bathed dog arrived captioned “the kids decided Cassie was a better name”.

I realised his previous adamancy was waning.

The children rose at 6am the next morning, keen to see the dog again. “We’re not keeping her,” I reiterated. “We’re going to try and find her owner,” I insisted, trying not to dwell on the sad eyes that regarded me.

A trip to the DSPCA confirmed she wasn’t a pup, and possibly even four years old. She’d also had her tail “docked”, we were told, something which was too upsetting to contemplate. And she wasn’t microchipped, so finding her owner, if she had one, was not going to be easy.

“We can take her from Tuesday, but we’re full now,” the woman said as we explained how she came to be with us. We headed home with micro-dog in tow, hoping we’d find her owner before then.

The next day my daughter arrived home with a sparkly pink collar, a new dog bed, feeding bowls, a lead and some doggie treats. The younger kids squealed with excitement. It appeared no one was on the same page as me.

“She’s not even a proper dog though,” I suggested as additional holes were made in the collar which, even at the smallest size, was far too big for her. But no one seemed to care that she wasn’t much bigger than a rabbit.

Still, the kids have been easier to get out of bed these mornings as they look to spend time with their “new dog” before school. And the middle child has assumed the position of chief pooper-scooper so I can’t even complain about that.

They scramble to walk and mind her, and they shower her with love. And after a few days’ bombardment, her tail finally started wagging and her eyes looked less sad.

We didn’t go back to the DSPCA.

She may be no Rodney, but she is Cassandra.