Professionalisation and reliance on free labour have dramatically changed kitchens 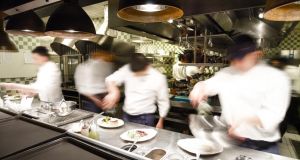 Roisin Gillen had a heartstopping moment in a kitchen in Chicago this summer when she bumped into a waiter who was carrying a tray of tiny fine china tea cups. Everything rattled dangerously. Mercifully, nothing broke. But time slowed as more than 30 pairs of eyeballs swivelled to stare at the Donegal chef. She was taken to one side by her boss. “I understand it’s your first day,” he said slowly and deliberately. “But that doesn’t happen at Alinea and I never want to see it happen again.”

Gillen was working on a six-week stage, or internship, in Alinea, Grant Achatz’s three Michelin star restaurant where American nostalgia meets molecular gastronomy in a tasting menu costing up to $355 a head. She worked 60 hours a week in this engine room of perfection and liquid nitrogen. For free. This month she graduated with a culinary arts degree from the Dublin Institute of Technology (DIT), swapping her mortar and gown for chefs’ whites and celebrating with dinner for her parents at the chef’s table in Heron and Grey, where she has been on the payroll as a chef since they opened.

Gillen was this year’s winner of the David Gumbleton award, set up to remember the brilliant Australian chef who moved to Ireland and died at a young age in 2004. A work internship or stage in Australia and later Europe was part of the bursary, which was funded by Seamus and Kevin Sheridan of Sheridans Cheesemongers as a tribute to their late colleague and friend. It has been awarded to a who’s who of young Irish chefs over its 14 years.

The unpaid internship is a large part of the business model for some of the world’s most famous and expensive restaurants. Chefs like Gillen save to slave in them

Gillen saved hard and part-funded her Alinea internship through a dinner at Heron and Grey, the Michelin-starred Blackrock restaurant where she shares the tiny kitchen alongside chef Damien Grey.

Alinea was the hardest kitchen work she had ever done, five 12-hour shifts from noon to midnight. Lots of the chefs and front of house staff were also interns. Many of them, like her, were working for free. The unpaid internship is a large part of the business model for some of the world’s most famous and expensive restaurants. Chefs like Gillen save to slave in these kitchens.

The payoff is the experience and the name on a CV at the end. But working for free is not something everyone can do. The industry is professionalising and chefs are getting posher, funded by family money to head into apprenticeships in kitchens where once they might have gone into banking or law. At the Ballymaloe LitFest four years ago, René Redzepi remarked on the dramatic change in kitchens in an interview with The Irish Times.

“Before, to be a cook you were basically on the same level as some dirty welder in a big shipyard where, you know, steel and flames and men with tattoos all over were swearing away,” he said.

“This has changed so much. Chefs are out there now. They’re asked for opinions. They’re writing books. Eleven years ago when we opened Noma, if I think of the staff that came back then, which would include several ex-criminals, you know, tough guys. If I think of the people that apply today? We have one from Oxford university. We have one from Cambridge. There’s two from Harvard University. We have a chef that speaks seven languages. Mandarin is one of them.”

The benefits to those world famous restaurants from all that free and highly educated labour are also part of the business model now. At restaurant Faviken chef Magnus Nilsson charges his interns for the privilege of working in his kitchen. The charge covers the costs of putting them up in the remote estate in northern Sweden. It’s a new take on the desk calendar joke: “You don’t have to be rich to work here but it helps.”

Like many chefs, Gillen worked through college to fund her living costs in Dublin. She met Grey in the Ranelagh restaurant Brioche, where she was thrown onto the pastry section after a chef left. “I was so terrified I think I thrived off the adrenalin. But I knew they were never going to let me absolutely die over there.” Working throughout college also gave her the kitchen experience she needed.

At Alinea she met one intern who was doing a six-month unpaid stage. Gillen had been offered a stage in a five-star hotel in England through DIT but she wanted to go to Alinea. “I wanted to just learn from them. They’re so innovative.”

What she learned was that a lot of the techniques rely on liquid nitrogen. And she also saw the difference with American kitchens, where people will drop everything and move state for the right job. About two months after she had finished at Alinea, the Chicago restaurant posted a group photograph on Instagram. “There were only about two people I recognised. They just went through people.”

Senior culinary arts lecturer at DIT Máirtín Mac Con Iomaire has seen chefs’ training move from being a trade to an academic profession. He joined the college when culinary arts became a degree two decades ago. Books about food were just beginning to go big.

“It was just starting. Anthony Bourdain had just written Kitchen Confidential.” Alan Davidson’s The Oxford Companion to Food had also come out. But still those books took up “only half a shelf”, Mac Con Iomaire says. Now there are whole libraries of them.

“The biggest change I’ve seen, and I noticed it quite dramatically this year, was the internationalisation. What you have is reflecting pluralism in Irish society.” Many new students are the children of immigrants. Those on the course do internships in Irish restaurants in their first and second years.

“That’s unpaid for a few weeks but if things worked out well they could get a summer job,” Mac Con Iomaire says.

The intern is not supposed to be left peeling onions in a forgotten corner, but the idea is that they will shadow a chef who will mentor them, take them to meetings and to see suppliers, “to see the nuts and bolts”.

French and German used to be part of the degree, but they were dropped “a few years ago” as the global focus shifted to Spain, Scandinavia, Italy and America. “An awful lot of the students already had more than one language,” Mac Con Iomaire adds.

Unlike the Culinary Institute of America, where tuition fees clock in at more than $34,000 a year, the DIT course is State-funded after the €3,000 registration fee is paid. “It’s one of the most expensive courses to run. When you have 16 people in a practical class it’s €12 or €13 a head per class in materials.”

The drive to get into a world-class kitchen won’t die down any time soon. It’s already changed the profile of the people who cook dinner. It is, in its own way, a kind of restaurant revolution.

David Gumbleton award winners: Where are they now?

2005 Kenneth Culhane. Won the Roux Scholarship and is currently in The Dysart in Petersham, London.

2006 John Kelly. After three years in Restaurant Patrick Guilbaud, he is now sous chef in Mount Juliet in the Michelin-starred Lady Helen Restaurant.

2008 Gavin Doyle. He worked with Dylan McGrath in Mint, and is currently head chef in Ortolana, Auckland, New Zealand.

2009 Eric Matthews. He spent two years in London as sous chef in the Square under Philip Howard. Returned to Dublin this summer as head chef in Chapter One.

2010 Keelan Higgs. He was head chef in Locks Brasserie, then sous in The Greenhouse, and is now co-owner of Locks and planning another restaurant soon.

2011 Margaret Roche. After three years in Alain Roux’s Waterside Inn, she then became a private chef in France, before becoming head chef in Hugo’s in Dublin. She is now in the Michelin-starred Wild Honey Inn in Lisdoonvarna.

2012 Diarmuid Cawley. Did his stage as sommelier in Raymond Blanc’s Le Manoir des Quatres Saisons. He is now a full-time lecturer in Cathal Brugha Street.

2013 Muireann McColgan. She became sous chef in Delahunt on Dublin’s Camden Street and is currently in Barry FitzGerald’s Bastible.

2014 Mark Moriarty. Won the international San Pellegrino young chef award in 2015, and opened his own business The Culinary Counter, a pop-up restaurant. He will be using his award to travel to Australia to work with an Australian winner of the young chef competition on a pop-up.

2015 Cúán Greene. Was cooking in Geranium in Copenhagen when it won Denmark’s first three-star Michelin status. He was head-hunted for Noma, and travelled to Mexico for the Noma pop-up. He is now back in Redzepi’s new Noma 2.0 restaurant.

2016 Ciarán Hyland. He is working with Fáilte Ireland after completing a masters degree in Limerick.

2018 Roisin Gillen. Sous chef in Heron and Grey in Blackrock. Completed an internship in Alinea.

Love in the time of coronavirus: Keeping relationships alive during lockdown