What's really in your Mars bar? Sugar and then more sugar 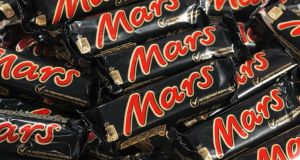 There are 228kcal in each Mars bars. Photograph: Getty Images

Unless you are an astronomer or Elon Musk, if I say Mars you probably think of the chocolatey treat with nougat and caramel. The bars have been around so long, it’s almost as if they are part of Irish culture.

But they are not.

Mars bars were created in the United States where Mars Inc is now one of the biggest privately held companies. The Mars family business sells everything from Dolmio sauces to dog food. On this side of the Atlantic, Mars bars have been made in Slough, England, since 1932. There’s a tiny stamp and a Union flag to say that on the packet.

Next to that and just above the words “Suitable for vegetarians”, you will see the letters “K-lbd-d” under what looks like a little roof. This logo refers to the Kashrut division of the London Beth Din (LBD), which is the leading UK authority on Jewish dietary laws. Kashrut is a Hebrew word referring to the body of Jewish religious laws concerning food. Such laws prohibit eating some foods such as pork and shellfish. Foods that are acceptable, such as this bar, are deemed kosher.

The logo indicates each ingredient and food additive has been checked to ensure it is not from a non-kosher source. The organisation points out that products such as yoghurt may have gelatin, spices may contain stearic acid salts and breakfast cereal may contain glycerine all of animal origin. (Stearic acid is a fatty acid that can also come from vegetable sources.)

On the side of the bar, it says, “Free from artificial colours, flavours and preservatives”. These words are popping up on more and more products. The implication is that anything natural is better. But is it? Sugar is natural but it’s not a good idea to get too much of it. So is fat. So while it is encouraging, it doesn’t you get a free pass.

Read the ingredients and you will see the first listed is sugar because there is more of that than any other product. Keep reading, though, and you will find further sweetness added with glucose syrup, lactose (milk sugar) and barley malt extract.

Cross check that with the nutrition information panel and you will see there is 59.9g of sugar in every 100g. So each bar is almost 60 per cent sugar. Surprisingly, that’s not an awful lot more than you would find in a bar of Dairy Milk, which is 56 per cent sugar.

But is a Mars bar chocolate? I don’t think so, nor does European Union. To be considered chocolate in the EU a bar must be at least 30 per cent cocoa. Ireland and the United Kingdom have a derogation from that directive so it needs to be just 20 per cent cocoa here.

Mars bars list in the ingredients cocoa butter, cocoa mass and fat-reduced cocoa. The bars don’t say how much cocoa they contain however. If it is a good amount, why does the company not highlight it on the packaging given the health benefits.

So what else is in there?

Oils and powders mainly. There is sunflower oil, palm fat and milk fat, which is also known as butter fat.

Soya lecithin pops up as an emulsifier, which means it is there just to help make the mix of fatty and non-fatty ingredients into an emulsion.

There are lots of powders in the form of skimmed milk powder, whey powder (from milk), egg white powder and hydrolysed milk protein.

That last ingredient is used as a foaming agent, meaning it helps to produce the foam and to stabilise it. This is found in some chocolate, caramel and biscuits. One manufacturer boasts on its literature that it is very useful but “has very little impact on cost, compared with traditional ingredients”.

So now we know.

Finally, there is also a little bit of the simple stuff in salt and natural vanilla extract.

A standard Mars bar is 51g, down from 65g in the 1990s. It is still high in calories at 228kcal per bar, which is equivalent to at least four apples. It is also more than double the 100 calories Public Health England suggests parents impose on their kids’ snacks.

Even for adults, a Mars a day just isn’t a good idea.