Industry & Co: Homage to Ottolenghi in a hipster spot for the loud crowd 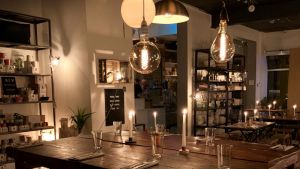 They are sweating this asset so hard you can almost hear it drip. We are in Dublin city centre on a Saturday night having a quick bite of supper. It will be quick because it’s noisier than a late-night house party and neither of us is in the mood to have a conversation at a holler. And it’s not a restaurant but a shop, selling lots of things you’d find in restaurants: glasses, plates, potted succulents and filament bulbs, all of which are dotted around and set on the small tables in this candlelit room.

Industry on Dublin’s Drury Street opened a couple of years ago like a edition of Monocle magazine in shop form. If you’re unsure what a hipster house might look like, a quick perusal of Industry’s steel shelves will get you up to speed. In the last month they’ve started clearing the floor after closing on a Friday and Saturday and setting out small square tables and seats best described as rectangular milking stools.

Two nights a week, Industry turns into an evening restaurant. They light tall candles and unveil a small rose-petal-strewn shrine, where they burn sumac-scented incense to the god of small plates Yotam Ottolenghi. Okay, there’s no shrine but the menu is a “You had me at hummus” love letter to the Middle Eastern cooking that the London-based chef put on the map.

They have a nimble little wine list and loud music, set to the “young person in a bar” decibel level. I’m the first here, in the door before they’ve even flipped the Closed sign over, and I realise it’s only going to get louder as the crowd arrives. And they do, around half of them with bookings and the other half as walk-ins.

Plates are nice, matching and for sale on nearby shelves. They recommend a mezze plate for two and another dish each, so we do as we’re advised. House pitta bread works well, soft on top and biscuit crisp on the bottom. It’s served in paper bags alongside the mezze plate of all the standards, done well. Chargrilled scallions are a good judge of the kitchen, simple to get right but also easy to get very wrong. Tonight they’re still bright green and cooked in good olive oil to add an alluring green glossiness to the large plate of colourful things. There are baked almond falafel hiding under them, which are more mealy than the nuttier take I imagined from the description. The star of the plate is a lemon-infused labneh, yogurt with the whey drained, thickening it to mortar consistency and flavoured with enough lemon (maybe preserved lemon because it’s got a heft to it) to make this luscious enough to eat on its own with the great bread.

There are meaty marinated olives, their stones still in and feta, which is also listed as marinated but doesn’t taste any different from a chalky fresh version. There are fiery ovals of chilli with this, which work well. A beet hummus is a little meek but the “classic hummus” is creamy and does what it needs to do.

We assumed our mezze would come and then the small plates (which take artistic licence with the idea of smallness because you can have “small” or “large”) would follow, but it all comes at once, some of it warm, some of it not. There’s an “Irish lamb chop”, which looks oddly like some kind of falafel shaped like a chop because it’s served with a skin of linseeds, the woody brown type that hardcore fibre types sprinkle on their porridge. “This’ll get me moving,” my friend remarks, reminded of his mother’s love of linseed for medicinal purposes.

The coating is a little odd, not least because you can’t discern between fat and meat, so there’s some chomping of lamb fat before you get to the main event. That fat-entombed meat is great, tender and succulent and perfectly pitched with the salsa verde and some ribbons of sweetly pickled red onion. My spiced, roasted cauliflower looks a little underdone (and a little undersized at €9 for a quarter of a head) but they’ve nailed the flavour, drizzled it with a tahini yogurt and the obligatory pomegranate seeds for the best iteration of this staple, although it’s definitely more side than main in size.

Desserts are good but not cheap. A bowl of “winter rhubarb” has more of that luscious labneh, drizzled this time with honey and some red spears of poached rhubarb, but it’s a dish you could bang out at home for buttons. A cardamom and rose malabi is surrounded by a moat of sticky berry jam and is fine. Savoury rules here rather than sweet.

The bill is modest but there’s only been one glass of wine so a boozier visit would be steeper. Evenings at Industry are not breaking any new ground but serving up the crowd pleasers well. If you’re not bothered by decibel levels and are looking for a good casual bite in this busy part of town, drop in.