Damme, that’s good: the Irish brewer beating Belgium at its own game 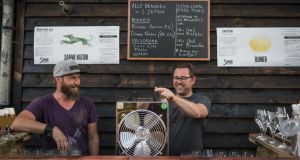 It was a dark winter’s day in West Flanders in 2013 when Breandán Kearney was drowning his sorrows in a train station bar. It had been a month since he swapped Belfast for Belgium, with nothing but a bag and a guitar, to move in with his girlfriend, Elisa.

Belgium was not working out. He couldn’t understand the language. He was unemployed. Root canal treatment had given him a raging toothache. And his guitar was broken.

The barman brought him a Westmalle Tripel, one of the country’s famous monk-brewed beers. By the time his glass was empty, he had worked out the key to him understanding this strange country: beer.

Five years on, Kearney is still in West Flanders. He and Elisa are now married, and Siphon Brewing, the brewery he co-founded in 2016, has just turned two. So how did he go from the depths of despair to opening one of best new breweries in Belgium, beating the locals at their own game?

Originally from Warrenpoint in Co Down, GAA kept Kearney close to home as he studied and then practised law. But, by the end of 2009, the effects of the recession were starting to bite at work, so he left Ireland on a flight to Ghana to work on a volunteering project. Next came south-east Asia followed by Pisco in Peru, to work on post-earthquake reconstruction, where he met and started seeing Elisa, a teacher from Ghent, in Belgium, looking to improve her English.

They continued the relationship remotely until Kearney moved to Ghent in 2013. A serious dose of culture shock followed, before inspiration for the brewery struck.

Beer has since become his purpose. “I’m not just learning, I’m obsessing about it, I’m getting up at six in the morning just to study it,” he says. “Beer was all about trying to get my head around the country.”

His new-found obsession expressed itself first in Belgian Smaak, a Belgian beer and chocolate blog he started with Elisa in 2014. Kearney’s musings drew the attention of other beer writers – the British Guild of Beer Writers named him “Beer Writer of the Year 2015” – and a small family-owned restaurant on the outskirts of Bruges.

Restaurant Siphon, in Damme, is at a spot where two canals and a river cross paths on their way to the North Sea coast. The elegant restaurant trades in traditional Belgian fare, and Jan Callewaert, the fourth generation of his family to work in the business, was looking for an in-house beer.

Callewaert didn’t know much about brewing, but he did have a sheep shed lying idle. Introduced via a mutual friend, he and Kearney became partners together with expert home-brewer Franklin Verdonck, and in July 2016, the first Siphon Brewing beers left the brewery.

Two years later, the animals have disappeared, and the low-slung wooden brewhouse is now stacked with gleaming stainless-steel tanks and piping. On a white-tiled wall hangs a whiteboard, where someone has written: “Be unafraid”.

It’s a useful mantra to guide them through a constantly-evolving Belgian beer market split between industrial breweries, family breweries, and small breweries like Siphon. Like much of Europe, Belgium has experienced an explosion of new breweries in the last decade. Beer consumption is declining though, as Belgians shift from drinking pilsner – the most popular beer style in the country – towards more wine and spirits. Competition for every glass is increasing.

The brewery’s logo is a slithering eel, which nods to the restaurant’s star dish, while each beer has as a label a single monochromatic icon, on a stark beige background, that references the beer’s ingredients or its heritage. Their Hutwe coffee-infused saison is represented by a coffee bean, and the blue mermaid silhouette on Siphon’s Cassandra oyster stout recalls a local folkloric fisherman’s tale.

“I want people to look at us and say, ‘I know that’s a Siphon beer’, because that’s what Siphon beers look like. I want them to say, ‘That’s going to be solid’,” Kearney says.

Siphon’s brand is built around three core beers: a saison called Blinker, a Damme Nation IPA, and the aforementioned Cassandra, a thick 7 per cent ABV stout made with discarded oyster shells from the restaurant. Their range is supplemented by seasonal beers such as Tronk, a rich and boozy 10 per cent Abbey-style quadruple made with vanilla pods and orange zest brewed for the winter, and one-off, usually keg-only, collaborations with other breweries and friendly bars.

All of Siphon’s beers have been brewed on the kit they’ve had since their launch in 2016, housed in the sheep-shed-cum-brewhouse and capable of producing roughly 3,000 litres of beer a month, divided 70/30 between bottles and kegs. In September, they doubled capacity with the addition of new fermentation tanks to meet demand, with a view to further expansion in two or three years.

The company has just taken on a third staff member to handle sales and marketing, but up to now this had been Kearney’s responsibility. He has worked hard to grow the brewery’s footprint from the Siphon restaurant, to the drinks wholesalers in Flanders that serve the region’s bars and specialist beer shops, to supplying outlets in Brussels and Wallonia, and eventually to international markets.

Working with UK importer Cave Direct, Siphon beers have recently become available in England. As word-of-mouth has spread about their beers outside Belgium, Kearney and Siphon have been popping up at beer festivals in London.

The brewery’s reputation was cemented when beer website Ratebeer named Siphon Brewing Belgium’s best new brewery for 2017, based on aggregated online beer reviews by the website’s users. Judging by the crush of beer geeks and curious locals at the brewery’s birthday party in July, interest and demand remain high.

Closer to his original home, beer has opened up opportunities for Kearney in Ireland too. He has recently participated in festivals like Belfast’s ABVfest, and collaborated on one-off beers with Kinnegar in Co Donegal and Boundary in Belfast.

He’s reluctant to comment on the Irish scene given how little time he spends in the country, but he’s now more attuned to the cultural difference in drinking habits of the two countries.

“A beer that has a head, in Ireland, people will say, ‘Can you fill this up to the top please, I don’t want all this ice cream’. Whereas people in Belgium see a small layer of foam on top of the glass and say, ‘I want half a glass of foam please!’”

On his irregular trips home, he also reconnects with his brothers – documentary filmmaker Oisín, singer Dónal, and musician Mike. Since 2011, they have written and performed as Tourist Walk, a project where they pick a location (previous editions have featured London and Ghent) to celebrate through live music and film.

“It’s nice for me to stay really in touch with that sort of creative part of me,” says Kearney. “I need that.”

Is a move back to Ireland ever on the cards? “Elisa loves where I’m from in Co Down,” he says. As a Dutch teacher in West Flanders, “the opportunity wouldn’t be there for her in the same way that it would be for me here [in Belgium].”

Whether his beers will ever be available in an Irish off-licence is another question. They distribute in Northern Ireland through Prohibition Drinks, supplying a handful of bars. For the rest of the island, Kearney’s romanticism clashes with business logic – Ireland’s small market makes it hard to offset export costs when there are larger, closer markets like the UK, and particularly France, where Belgian beer is hugely popular.

“There’s no reason to sell beer to Ireland, but it would be beautiful for me to go into a place and see Siphon being poured there.”

It’s good to talk: the pandemic has brought this Irishwoman closer to home
4

I am a victim of emotional abuse ... it felt like my husband had died
Real news has value SUBSCRIBE