Meet the man who bans children from his Tipperary cafe 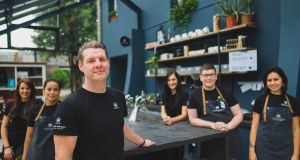 A cafe that bans children? I had mixed feelings when I heard about this new development on the Limerick-Tipperary border. Unlike one of my colleagues who heard about a child-free coffee space and said with – if you ask me – a bit too much enthusiasm: “It sounds fantastic. I want to go there immediately. I bet it’s always packed.”

I decided to phone the, I can only assume, monster who runs the cafe in Birdhill, Co Tipperary – one of Ireland’s tidiest villages – to see what it was all about.

Dubliner Alan Andrews is the man behind the Old Barracks Coffee Roasters, which he tells me has marvellous views of lower Lough Derg and Mount Moylussa.

As well as being a child-free zone, the 300-year-old building is a key player in the coffee revolution that is creeping through Ireland. If you are the kind of person who likes instant coffee (what is wrong with you?), you’ll be feeling a little sidelined in this new Ireland where a cup of instant is about as acceptable in polite Irish society as Easi Singles or crack cocaine.

The Old Barracks is a coffee roastery, Andrews is keen to point out. You can see “live” coffee roastings if you’re into that, do coffee tastings and avail of noise-cancelling earphones if you are craving solitude. There’s mindfulness classes and yoga and pilates on site too. (Of course there is.)

Among the customers, he says, are gleeful parents delighted with the chance for a break and a cast-iron excuse not to bring the kids

After 10 years of building up his coffee training and education business, Coffee Culture, he decided to build a roastery with a cafe attached. He had spent years travelling the world learning everything it’s possible to know about coffee and had a vision of a place where he immerses customers in an authentic coffee adventure.

I’m happy to report the man who banned children from his coffee shop seems quite normal. I nearly fell off my chair when he told me that not only is he not a child-hating ogre, he has two children himself, Sirin (15) and Calum (13). And apparently banning kids from the cafe was partly their idea.

When the café was first mooted, Sirin said in her best Kevin the Teenager voice: “Dad, we’re not going to have to go there and watch you do coffee stuff are we?”

So part of the reason for making it an over 18s venue – there’s a sign on the door – is so that they don’t have to hang around there. Clever, Sirin.

But there are other reasons why you won’t find children wandering around the Old Barracks. One is a health and safety issue.

“The roastery is basically 1,000 kilos of cast iron, like an open pizza oven, kids have no interest in it because it’s a big hot machine, adults are only going to tell them don’t touch and stand back,” he says.

“Children can come in with their parents to order coffee for take-out and loads do, there’s a playground nearby and a community garden so they go there or sit in their cars.”

Have there been complaints? “Some,” he says. “But most people understand and appreciate the idea of a relaxing, adult-only space that isn’t their home or their workplace and isn’t the pub.”

And this is really at the heart of what he’s trying to do. Andrews is a fan of the “third place” philosophy, the idea that after home and work we need another space to go to, which in Ireland has traditionally been the pub. He’s trying to create an alternative alcohol-free venue where adults can take time out, relax, learn about coffee and get some head space. And ever since talking to him, I’ve been plotting a trip to Birdhill.

I’m not the only one. Among the customers, he says, are gleeful parents delighted with the chance for a break and a cast-iron excuse not to bring the kids.

Meanwhile his own children are still supportive of the idea. “Sometimes I try to get them to come down here for an hour, but they say no, sorry dad, we’re not allowed. We’ll stay here with the Xbox.”

Some things you CAN do with children this weekend ...

The Ardagh Chalice
It’s the 150th anniversary of the finding of the Ardagh Chalice, and to celebrate there’s a special tour of the Treasury Exhibition to find out more about one of this country’s most famous objects.

Meet at reception on Friday (November 9th), admission is free. Places will be allocated on a first-come, first-served basis. From ages seven and over. 11.30am-12.15pm

Name that Festival
The Ark Children’s Cultural Centre in Temple Bar Dublin is creating a festival by children, for children and they want kids to help choose the name. Send your ideas for a name and their Children’s Council (35 children from across the Dublin area) will shortlist, discuss and then vote on what they think is the best title.

The child whose idea is chosen will be a guest of honour at the festival, with a pass enabling them to attend all of the events with their family.

The festival will coincide with Cruinniú na nÓg, Ireland’s national day of creativity for children and young people, and it will be a celebration of art, culture and children’s rights. They are looking for a short name for the festival from one to three words. The closing date is 5pm, Friday, November 9th. The new name will be announced on Universal Children’s Day, November 20th. Children’s suggestions for the name can be submitted online: arkly.ie/FoCname

Sing to me with Kyle Reilly at Glór Ennis
Kyle Riley is back at the Glór Theatre in Ennis to get you and your little ones moving. Enjoy an hour of engaging music with singing, percussive instruments, bubbles and floating scarves.

Disney On Ice: Dream Big
Moana, Maui and friends are making their debut ice appearance in Europe as part of this action-packed ice spectacular. Alongside Moana and demi-god Maui are icy tales of courage and heart, including storylines from Frozen, Beauty and the Beast, Aladdin and Tangled.