Paul Howard: Why I still love a Bird's trifle and other working class food memories 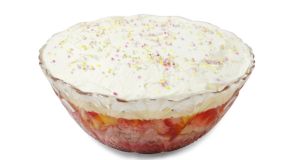 Trifle: Paul Howard still makes a Bird’s every Christmas in a nod to his working-class childhood. Photograph: iStock/Getty

Could there be a more brilliantly Irish phrase than “far from it you were reared”? You can’t throw a dart up a main street in Cork, Galway or Dublin these days without hitting an artisanal avocado smash or a salted caramel cupcake (the artist formerly known as the fairy bun). Yet there’s an irony in the fact that there’s no more bougie and assuredly middle-class a construct than the farm-to-fork, meals-from-scratch phenomenon. Decades ago, “far from it you were reared” was, well, far off.

In a Guardian column earlier this year, food critic Grace Dent posited that the “‘processed food debate’ is delicious, MSG-sprinkled class war”. Recalling her own formative experiences in working-class Carlisle – the first trip to the “big Asda”, crispy pancakes, Sara Lee gateaux, McCain oven chips – Dent writes that the foods of her youth trump any fine-dining experience she has ready access to. “I love a dinner of Birds Eye potato waffle with spaghetti hoops, and a Heinz salad cream smile on the side of the plate,” she writes. “Processed food is easy, tasty and restorative. It hits the spot. It celebrates, it pacifies, it is a light of hope at the end of another tricky day.”

Yet in Ireland, things were slightly the other way round – in the 1970s and 1980s, convenience foods were aspirational and perceived as middle-class symbols of modernity. Status symbols, even.

“After the depression and poverty of the 1950s, the 1960s and 1970s represented a time where many people could see improvement or advancement happening within their own lives,” observes food historian Regina Sexton. “Many of the convenience foods were looked upon as being symbols of moving away from a past that the Irish didn’t want to live through or remember. In the cities, you had a surge in factory foods – processed peas, frozen fish fingers, Angel Delight, instant jelly.

“You had changing rhythms in terms of lifestyles, too, in terms of women going out to work,” she adds. “The industry marketed processed foods as the thing that will help you into this new lifestyle.”

The first wave of processed foods brought with it canned fruit, Bovril, Yorkshire relish and tinned meat, but the second wave in the 1970s and 1980s was even more sophisticated in its marketing: Smash, Vesta instant curries, Lean Cuisine; all marketed to those professing to be time-poor.

“These introduced us to different food cultures, although it gave us access to these ethnic cuisines and in a very artificial, constricted way, we thought that they were the height of sophistication.”

Initially, whole swathes of Irish people were left behind in this new foodie revolution: “For the working-class people, this food became a sort of forbidden fruit,” notes Sexton. “Many households didn’t have the money to invest in these foods, but had time to invest in cooking stews and coddles from scratch.”

Ross O’Carroll-Kelly author Paul Howard grew up as one of four boys on a council estate in Ballybrack, Dublin. Perhaps for obvious reasons, sweets and fizzy drinks were in scant supply in a household of four robust, ebullient boys. Rather, things were much simpler.

“It’s funny how people eat the way we did years ago, but doing it expensively, making it an elite thing,” he notes. “We did it out of necessity.”

“Dinner every day was some kind of meat, potatoes and two vegetables, followed by bread and jam,” Howard recalls. “We never had things like pizzas; in fact I think I was in a McDonald’s three times in my whole childhood. The day after my Confirmation, I was taken by my dad to King Burger – this was pre-Burger King – in the Ilac Centre. Coming home from football matches, we’d bunk on the Dart and spend the money on chips and vinegar, which was truly beautiful.”

Posh treats in Howard’s household, when he got older, included Vienetta, the lesser-spotted Romantica ice-cream cake, and a Saturday night chocolate bar in front of Columbo. A teenage friend got a job in Superquinn (“that was too posh for us, we shopped in Super Crazy Prices”), therefore introducing him to an entire new folio of foods: “He was like a modern-day Magellan, coming back to us with kiwis.”

In her book People Like Me, Senator Lynn Ruane recounts growing up on the sprawling council estates of Tallaght.

“There were only two kids in my ma’s house, but one of the families on our road with more kids used to eat sugar sandwiches,” she recalls. “In our house, you always knew what food you’d get – there was shepherd’s pie made from scratch on a Monday, a stew on a Tuesday. A lot of people would say you could only put sausages in coddle, but my ma would put sausages in her stew.”

Coming home from school for lunch in the 1990s, Ruane would often have McDonnell noodles on toast, or a Meanie crisp sandwich. “It was a point when my mother’s life was particularly busy,” she says.

“There was an assumption years ago where women were expected to be housewives and stay at home. Because of the change of speed in lifestyle, there was a big massive shift and kids became much more vocal. I remember my daughter Jaelynne asking for calamari in a restaurant once. When I was that age, I’d have thought, ‘this stuff is mad’. I did soon start to embrace it – when I’d bring the kids on holidays, I’d go out of my way to order something adventurous on the menu.”

Even now, says Sexton, the food industry has become even more astute at offering a perception of choice.

“Take cheese for example,” she notes. “Years ago, it might have been made at home in a farmhouse context, then cream cheese and things like Calvita came online,” she recalls, “The market keeps having to reinvent itself. If you look at these foods in their present-day context, they are often aimed at a less affluent group of people, and the messages are always subtle – they’re quicker to produce, they offer immediate satiety. Now, those with middle-class aspiration want things that are more ‘authentic’ and ‘homemade’, demanding a level of expertise in the production, leading to an emergence of an alternative food production system – the re-emergence of the artisan producer and, say, the farmhouse cheese industry.”

As with Dent, the childhood convenience food classics that Howard enjoyed, albeit on a rare-enough basis back then, still crowd his affections.

“Every time I crave those tastes I’m nostalgic for my childhood,” he notes. “Every Christmas, I make a powdery Bird’s trifle, despite the fact that my wife Mary makes a proper one with sherry and fresh fruit. I’m the only one that eats mine, though it’s still gone in two days.”