Six of the best TV shows to watch this weekend

Ozzie hard bods hook up in Love Island Australia, plus a second series of Cardinal 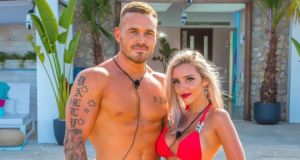 Love Island Australia: “It’s like an R-rated Home & Away”

Love Island Australia
Saturday-Friday, 3e, 9pm
Love Island is barely a week off the air and already the withdrawal symptoms are setting in. Trembling, shaking hands, hot and cold flushes, and nervous flicking of the remote in futile search for something to replace your summer fix of sun-drenched frolics. But by a stroke of luck, it just happens that a new series of Love Island Australia is starting. It’s almost as if they planned it that way. The series promises buff Aussie bodies as a group of sexy singletons from Down Under are let loose in a luxury villa, while cameras close in on their amorous antics. It’s like an R-rated Home & Away. And if you still can’t say goodbye to the UK Love Island crew, Caroline Flack presents Love Island Reunion on Sunday at 9pm.

Cardinal: Blackfly
Saturday, BBC4, 9pm
The Canadian crime thriller, based on the series of novels by Giles Blunt, returns for a second series. It’s spring in Algonquin Bay and the blackflies aren’t the only ones out for blood. Detectives John Cardinal (Billy Campbell) and Lise Delorme (Karine Vanasse) have a strange case on their hands: a young woman has wandered out of the bush with a gunshot wound to the head and complete memory loss. Cardinal becomes obsessed with discovering her identity and who is trying to kill her. Then, when the body of a local biker is found in a cave, it seems the two cases are related.

Angela Carter: Of Wolves and Women
Saturday, BBC2, 9pm
She’s now seen as one of the most distinctive and influential authors of the 20th century, but despite writing such books as The Magic Toyshop and Nights at the Circus, Angela Carter didn’t always get her due during her own lifetime. As this documentary points out, her frank exploration of gender and fondness for the supernatural seemed to wrongfoot macho literary establishment – not only did she never win a Booker Prize or receive the impressive advances paid to her male contemporaries, but she regularly struggled to pay her bills. Still, 26 years after her death at the age of just 51, her work is more relevant than ever. Here friends, family and admirers, including Margaret Atwood, Salman Rushdie, Jeanette Winterson and Anne Enright, pay tribute, while actress Hattie Morahan portrays the young Carter.

The People’s Vet
Saturday, C4, 4.30pm
Documentary following the vets, nurses and care assistants at two of the UK’s busiest charity pet hospitals. In the Kirkdale surgery, head vet Stephen provides dental treatment to a dog while his colleague Beth patches up a cat that has an open wound on its back following a fight with a fox. In Huyton, a dog is rushed in after having suffered seizures, and an unusual-looking animal is found wandering the streets of Liverpool – which turns out to be a chicken in need of a new home.

Flying Across Britain with Arthur Williams
Sunday, C4, 7pm
A former royal marine explores Britain from the air in his own 1943 single-seater aeroplane. His journey begins in the West Country, taking in the rolling hills and open plains of Gloucestershire, Wiltshire, Dorset and Somerset. Along the way he meets fellow aviation enthusiasts, including an aerobatic champion, a Cotswold craftsman who makes wooden propellers, and a man working on a jet-propelled flying suit. He also attends a public flying display and attempts a landing on a reproduction aircraft carrier.

Hidden Britain by Drone
Sunday, C4, 8pm
Tony Robinson presents a second series of the programme that uses drones to shoot aerial footage of areas of Britain off limits to the public. In the first episode, he dispatches flying cameras to explore an abandoned theme park, an immense stately home and underground wine vaults belonging to billionaires. The programme also examines the secrets that Argos conceals from the eyes of its customers and contains footage of a flower farm in full bloom, which is closed to the public for 50 weeks of the year. - Additional reporting PA