No contest as majestic Miriam O’Callaghan wears her crown lightly 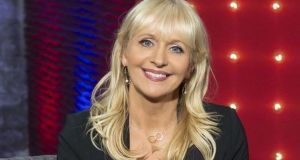 The prospect of a presidential election may be growing greater, but one mooted candidate takes to the airwaves last week to outline their reasons for not running. On Wednesday, as barrister and Irish Times columnist Noel Whelan rules out an election bid on Today with Miriam O’Callaghan (RTÉ Radio 1, weekdays), the factors against a presidential run are laid out in stark terms. “Why would you have wanted it?” O’Callaghan wonders. “It’s a terrifying, damaging, difficult campaign.”

The query is directed at Whelan, but it sounds more like a rhetorical question, effectively explaining why O’Callaghan quashed speculation about a presidential bid of her own some months back. After all, why would she want to go through the hassle of campaigning for the presidency when she can continue to reign as the monarch of Montrose?

Her tenure as the summer host of the Today magazine programme emphasises O’Callaghan’s all-too-often overlooked strengths as a broadcaster. She has long been teased for her expressively empathetic tendencies (not least by this reviewer), with her catchphrase of “genuinely” by now a vernacular meme for showy emoting. But in her current gig, her most striking characteristic is the easy poise with which she helms proceedings. It’s not for nothing that her name has bumped that of usual host Sean O’Rourke off the title: this is emphatically her show, she is no one’s stand-in.

Political items are handled with the confidence one would expect from the host of RTÉ TV’s current affairs flagship Prime Time, but her approach with guests such as Minister for Affairs Simon Coveney is more gently inquisitive than O’Rourke’s aggressive grilling. This might seem to make life easier for guests, though O’Callaghan doesn’t shy from pulling Coveney up when he strays into platitudes. Equally, her style allows for discussions to flow in interesting directions, for instance her intriguing talk with Whelan on the role of the presidency in Irish life. Meanwhile she can’t disguise her anguish when hearing about the horrific fires in Greece.

But her nous is most tangible during items that require a more rounded manner than that of a political interrogator. She conducts a quietly arresting interview with Seattle man Don Theiler, whose wife Janet was killed in an accident while cycling in the Gap of Dunloe in Co Kerry last year. Some of O’Callaghan’s more stereotypical trademarks are on show, for sure. “What should have been a great day ended up being a day filled with tragedy,” she remarks to her guest, unnecessarily ramping up the emotion.

It’s refreshing to hear cultural and personal issues treated on a par with politics and sports, not as a distracting afterthought

As the understated Theiler recounts the dreadful circumstances of his wife’s death, O’Callaghan pulls together the human cost and the wider story. She asks about official inaction on road safety improvements in the Kerry beauty spot, where two more tourists have since died in a further accident. True, she can’t help herself from asking whether the forthcoming inquest on the accident will help “heal” her guest’s pain. But O’Callaghan’s open manner and narrative instincts ensure this tragic personal tale also highlights a broader issue.

Her sympathetic ear also adds another dimension to reporter Brian O’Connell’s regular item on small ads. When O’Connell explains how he is always curious about ads offering unworn wedding dresses, O’Callaghan sounds positively giddy: “I’m getting worried about you.” But the mood shifts when they listen to O’Connell’s interview with an Irish woman who is selling her wedding rings because her husband, who she met in Beirut, married another woman after failing to get a visa. “It would break your heart, it’s like a short story,” says O’Callaghan. She sounds, dare one say it, genuinely touched.

Overall, O’Callaghan reshapes the Today programme into a wider-ranging magazine show. It’s refreshing to hear cultural and personal issues treated on a par with politics and sports, not as a distracting afterthought. Approachable, confident in her distinctive persona without ever seeming haughty, O’Callaghan’s summer reign in the mid-morning slot is not so much regal as informally majestic.

Meanwhile, the good weather is so prevalent that the most dependably gloomy spots appear brighter than usual. There’s even a sunny glow on Liveline (RTÉ Radio 1, weekdays), as Joe Duffy ends Wednesday’s edition on an uncharacteristically upbeat note. Duffy talks to Michael Power, who has previously appeared on the show appealing for the whereabouts of his son John, who went missing in Holland. “How are you?” Duffy asks his guest. “How am I? Delighted and excited,” replies Power, who explains that John, whose rucksack has apparently been stolen, has walked into the Irish embassy in Germany. Duffy’s joy is obvious, to the point that he glides over his guest’s complaints about data privacy laws hampering efforts to find his son.

There are also harrowing tales of pensioners attacked by burglars. But there seems to be less friction than normal. Even the seemingly reliably fractious issue of a transport strike doesn’t generate the furious debate one might expect.

Duffy does his best to create heat as he discusses the pilots’ strike at Ryanair. He hears from Stephen, who places the blame for the strike on the Forsa union “flexing its muscles”. But no outraged caller emerge to argue with Stephen, whose apparent rationality can’t help matters. As a last resort, Duffy invokes the supposed unpopularity of outspoken Ryanair boss Michael O’Leary: “People don’t regard him as huggy-muggy, happy-clappy Michael.” Still nothing. There are callers who bemoan poor conditions of Ryanair cabin crew, but full-on barney doesn’t materialise.

Duffy hasn’t lost his edge completely, however. When another caller cannot be heard clearly on air, he cuts her off abruptly. “Terrible line,” Duffy harrumphs, “I’m not going to inflict that on listeners.” Faced with that attitude, presidential election campaigns don’t seem too bad after all.

Radio Moment of the Week: Thought for the day
On Thursday’s edition of Rising Time (RTÉ Radio 1, weekdays), presenter Shay Byrne once again shows off the wry wit that lurks behind his ostensibly chipper patter. At the show’s close, Byrne plays Best Day Of My Life by US band American Authors, a song as upbeat as the title suggests. “That’s the attitude to start the day with, it’s going to be the best day of my life,” says Byrne as the song ends. He pauses for a split second, then asks, “What’s tomorrow going to be though?” Such is the rueful wisdom of a man whose working day starts at 5.30am.