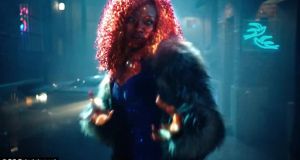 Some fans were upset that Diop, a dark-skinned African-American, was cast to play the orange-skinned Starfire

It seems like every day the internet is ablaze with toxic fandom reacting badly to gender and cultural representation. The reason for this is that it literally IS every single day.

Last month a consortium of aggrieved Star Wars fans started an internet campaign to fund a new version of The Last Jedi which didn’t pander to “social justice warrior propaganda”. Last week, Netflix’s new She-Ra cartoon was slammed for desexualising its title character, as all the Very Angry Online Men™ as “a butch lesbian” because her chest was downgraded from an F-cup to something slightly more aerodynamic.

Then this week, Anna Diop was forced to delete her Instagram following an onslaught of racist messages about her casting in the Titans TV series. Debuting on DC’s new streaming platform, the show stars Diop as Starfire, a super-powered alien who fights alongside other young stars of the DC Universe, most notably Batman’s sidekick Robin.

Some fans were upset that Diop, a dark-skinned African-American, was cast to play the orange-skinned Starfire, but as Lie-Ba @leebee416 tweeted, “Jennifer Lawrence isn’t f***ing blue so where was this energy when she was cast as Mystique?”

Indeed, such outrages of “faithfulness to the original” are mostly evident whenever it’s a female or ethnic minority castmember involved. It can even occur, as in the case of Kelly Marie Tran in The Last Jedi, when they’re cast in an entirely new role. This too is an affront to the sort of knuckle-dragging nerds who can conceive of a moon-sized cannon obliterating six planets at a time but not, for example, an Asian person.

As any non-racist comic fan can tell you, the story gets weirder when you examine the roots of Starfire as a character, who has commonly been drawn to resemble a black woman throughout the 80s and into the present day. DC artist Rags Morales has even confirmed that he based his design for the character on Naomi Campbell. The controversy brings to mind the outcry among fans of the Hunger Games franchise, furious at the “blackwashed” casting of African-American actress Amandla Stenberg as Rue in the first film, only to be shown sections of the book in which it is made explicitly clear that the character is, and always has been, black.

None of which will convince those people for whom faithfulness was never the issue in the first place, but rather their own sad, scared sense that representation of minorities means they lose their own place in the cultural conversation. Until the internet’s bigoted nerds learn to appreciate what makes genre fiction great – the flexibility of imagination, the acceptance of the unfamiliar – they should find a new hobby and leave fantasy to the rest of us.

Love Island: This pair are €60k richer. The rest of us feel much worse off
6