The nine best Netflix shows to watch in August

Ozark returns, plus a new animated sitcom from The Simpsons’s creator Matt Groening 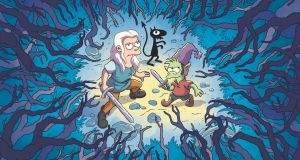 Like Father
August 3rd
Kristen Bell embarks on another getaway in a tropical paradise but unlike Forgetting Sarah Marshall, her character Rachel is the one left heartbroken this time around. Having been ditched at the altar and with her estranged father (Kelsey Grammer) turning up unannounced at the ill-fated nuptials, the pair drunkenly decide to set sail on her honeymoon cruise in an attempt to escape their chaotic lives.

With the addition of Seth Rogen as the goofball “good guy” the film feels like part of a new sub-genre that has been developing over the years – the existential crisis-comedy, one where family drama and the pop-philosophy of “finding yourself” is sewn into the usual rom-com tropes. As with This is Where I Leave You and About Time, Like Father plays into the effusive “I love you Dad” motif that is becoming more prevalent in these wise-cracking comedies adding another layer of sentimentality to the predictable romantic pay-off.

Demetri Martin – The Overthinker
August 10th
Demetri Martin returns with his new hour-long special, The Overthinker. His first filmed show since 2015’s Demetri Martin Live, the writer/director uses this foray back into stand-up to address the detritus yielded from his overactive mind. The comedian muses on everything from his childhood precociousness, road rage to doughnut holes and the most aggressive letters in the alphabet using his signature illustrations and deadpan delivery.

Disenchantment
August 17th
This new animated sitcom from Simpsons creator Matt Groening is his take on the fantasy epic set in the surroundings of the medieval kingdom Dreamland. It’s the story of hard-drinking Princess Bean, voiced by Broad City’s Abbi Jacobson who refuses to conform to society’s norms and flees her father’s kingdom. She’s accompanied on her journey by her friend Elfo (Nat Faxon) and her louche personal demon, Luci (Eric Andre). The series also features the vocal talents of The Mighty Boosh boy Noel Fielding and the unmistakable burr of Matt Berry.

As with Futurama, there is a surreal element to the series that’s co-produced by Simpsons alumni Josh Weinstein and Bill Oakley who ensure that even with the fantastical setting, the jokes will be as topical as ever. Disenchantment is the familiar tale of one girl’s growing disillusionment and frustration with a system that seems outmoded and her fight against the ideals of an ignorant hierarchy.

To All the Boys I’ve Loved Before
August 17th
Jenny Han’s beloved young adult novel has been turned into an enjoyable Netflix teen romcom starring the charming Lana Condor (X-Men Apocalypse). Condor plays Lara Jean – a dreamy, fanciful student who relies on her vivid imagination to navigate the difficulties of high school life. She pens overwrought letters to her secret crushes (including her sister’s boyfriend) never to be read by anyone until one day they are stolen and distributed to the objects of her affection much to her intense embarrassment. She is then forced into asking popular boy Peter (Noah Centineo) to pretend to be her boyfriend to divert everyone’s attention and things become even more complicated.

It’s a zingy coming-of-age comedy with a winning lightness of touch that has all the relatable awkwardness of teen movies like the sadly underrated Edge of Seventeen and the classic Drew Barrymore vehicle, Never Been Kissed. With this, Set it Up, The Kissing Booth and The Incredible Jessica James, Netflix are single-handedly trying to bring the much maligned rom-com genre back into vogue.

Follow This
August 23rd
In this age of bingeing and clicking, of scrolling and losing yourself in useless information, it’s no surprise that the two pioneers of this modern media assault, Netflix and Buzzfeed, should eventually join forces. Follow This is a 20-episode weekly series that sees various Buzzfeed reporters talking through the latest cultural phenomenon like AMSR or more serious topics such as the opioid addiction epidemic currently gripping America. These short 15-minute blasts are not designed to be consumed in a traditional couch-bound setting but are instead, cannily assembled to be viewed on devices, to inform and entertain you on the daily commute supplementing viewers mindless Google searches until they reach their destination.

Ghoul
August 24th
Ghoul is the much-anticipated Indian mini-series from the producers of Insidious and Get Out. A chilling three-part thriller that stars Radhika Apte (Sacred Games) as an aspiring soldier whose ruthless ambition has impressed her superiors so much that they task her with interrogating a mysterious, unintelligible prisoner. In the suffocating surroundings of the military facility, the prisoner unleashes secrets about his captors and endeavours to prey on their vulnerabilities. A horror series steeped in the shame of war, the use of torture as a weapon and the weight of guilt that haunts those involved, Ghoul is no average fright fest.

The Innocents
August 24th
This moody, supernatural teen drama centres on young couple Harry (Percelle Ascott) and June (Sorcha Groundsell) who run away from their oppressive families to start a relationship. Their happiness is short-lived as disturbing discoveries are made about their lives that pushes their love to its limits. The tormented lovers must decide whether to remain cosseted in their innocence or face up to their new reality.

With shades of the emotionally driven modern sci-fi shows like Sense8 and The Rain, The Innocents is another slice of dystopian drama for the doom generation.

The Comedy Lineup
August 31st
The Comedy Lineup is Netflix’s showcase for new(ish) comedians served in front of a live studio audience, the acts each perform a bite-sized 15-minute set. The last season featured blistering sets from Sam Jay and Jak Knight, with the show acting as a primer for viewers to perhaps discover previously unseen talent.

The streaming services’ investment in comedy has been highlighted in recent months with their procurement of Hannah Gadsby’s groundbreaking show Nanette as well as successful specials from Tig Notaro and Ali Wong.  Back for a second season, this time around it features the talents of our own Aisling Bea, here’s hoping the global platform will elevate her into the comedic stratosphere.

Ozark
August 31st
Netflix’s gritty crime drama is back for a second season. The tale of an average family thrust into a life of crime after a money-laundering scheme goes awry had critics and viewers hailing it as the new Breaking Bad. Jason Bateman’s Marty Byrde may not have crossed over into Walter White levels of anti-hero behaviour just yet but this season sees the family’s world turn even murkier as their entanglement with the Snells becomes more apparent and the strain of this begins to push Wendy (Laura Linney) and Marty into more desperate dealings.