Robin Williams: ‘He was always looking for another connection’

Review: Robin Williams: the death of the comic overshadows this poignant documentary like a stone 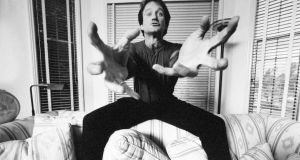 Robin Williams: always reaching out for that ‘little extra hug you can only get from strangers’

Looking back, it’s extraordinary to see how many times Robin Williams was asked to explain his thought processes. There was never an easy answer. In one of his earlier stand-up routines he even made a routine of it, performing a live craniotomy for his audience.

“Come inside my mind and see what it’s like when a comedian eats the big one,” he’d say, flipping the top of his skull open, like a car bonnet. “Mayday, mayday, mayday!” screams his unconscious when a gag fails, and Williams mimes reloading material, a frazzled engineer in a missile bay, performing with such vigour his trademark rainbow braces snap up. “All systems overload! Anything goes!”

Four years after his death, Marina Zenovitch’s compelling documentary, Robin Williams: Come Inside My Mind (Sky Atlantic, Sunday, 9pm), is somewhere between a feature-length appreciation of this extraordinary and indefatigable talent and a kind of neurological study.

It is often hilarious, because so much of Williams’s material and its manic delivery still feels so fresh, and Zenovitch favours unseen material, such as blue riffs between takes on Mork and Mindy or Sesame Street, as intimate as sharing a long-held secret.

But the lingering effect is entirely poignant. First, because you only appreciate the full shape of a life when it has ended. And second, because we know the circumstances in which it did; by suicide, at the age of 63. That knowledge sinks through the film like a stone. Here was a man who was always on. Now he’s gone.

“He was very isolated,” recalls McLaurin Smith-Williams, one of two half-brothers who lived apart, “he had to entertain himself a lot.” In truth, Williams entertained everyone. His father was “a sweet man but not an easy laugh”, his mother “a comedy maven”, his school friends in San Francisco, his peers and instructors at Julliard, and soon an awed new generation of fellow comics at comedy clubs.

Even his first wife, Valerie Velardi, is seduced with a bit. “He was always looking for another connection,” she remembers. “If he needed to pull out another accent or a character he would do it. He was shameless.”

What does it take to be always on? Comedians remember his lines as well as they do his infidelities, his ruinous appetite for the drugs scene, his commercial bombs, his reforms and revivals. Zenovitch prefers his depths: one colleague reminds you that the zany improvs followed tonnes of preparation. A photographer remembers him still as a Zen Buddhist before a livewire performance. And the film roles themselves gather in substance through Awakenings, The Fisher King and Good Will Hunting – all of them fixated on neurology and psychology. Was it inevitable that he would perform Beckett on Broadway, with Steve Martin, two famous comedians joking over the abyss?

“He needed that little extra hug you can only get from strangers,” says his friend Billy Crystal, with fascinating insight into fame. “That laugh is a drug. That thrill, that acceptance, is really hard to replace.”

People speak less fulsomely about depression. Smith-Williams admits it runs in their family; Eric Idle remarks of a manic mind that, left alone, “the thoughts can be disturbing”; and Williams’s son Zak remembers his father thinking, “he was not succeeding as a person if he wasn’t entertaining.”

It’s dangerous to look for reason in suicide, an act that is never rational, as though the way Williams was could make sense of the way he went. Considering Williams’s later-life diagnosis with Parkinson’s disease and Lewy body dementia, his friend Bobcat Goldthwait is more even-handed: “His brain was giving him misinformation.”

You can only imagine what routine Williams might have spun from that insight. “All systems overload! Anything goes!” But, like the unravelling of a joke, or a unique comic imagination, some things don’t bear thinking about.

If you are affected by this articles, you can contact the following helplines