‘Love Island’: ‘Only boring pseudo-intellectuals could be immune to its charms’ 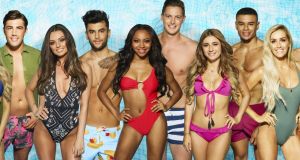 Love Island: the show has become a unifying subject of conversation, from flat mates to work colleague, to arguing with family around the dinner table. Photograph: ITV

By rights everyone should hate Love Island. There is nothing remotely likeable about the concept of the “romantic” game show where 11 genetically blessed reality telly wannabes strut around a villa in Mallorca coupling up and then quickly splitting up whenever a more viable prospect is presented to them, like rotating kebab meat in a takeaway window.

The giant oak door to the villa remains open for the entire series as if to symbolically usher in the ever-changing cast of eager hopefuls taking a chance on love, offering themselves up to the Gods of television to be made famous or more realistically, dreaming of their coveted cover of OK! magazine.

Packed away in between their selection of Boohoo bikinis, Missguided mini-dresses and Topman t-shirts are their insecurities and the flaws they hope will never be identified. When not engaging in cruel mindgames and indulging in bedtime fumbling, the assembled islanders spend their days lying prostrate on beanbags chatting nonsense about how “loyal” they are or ironically, how someone will soon be relegated to the subs bench of their affections. The callousness of the male participants, their dead-eyed blankness when swiftly discarding a relationship has all the viciousness of a Neil LaBute play but performed by the cast of Hollyoaks.

It has become a cultural phenomenon, building on its audience every year since its return in 2015 to become the most watched show on ITV2

It is easy to feel discomfort and irritation when watching the show but only boring pseudo-intellectuals who pretend they don’t own a TV and sentient Christmas ham Piers Morgan could be immune to Love Island’s unique charms or ignorant to its sociological significance.

It has become a cultural phenomenon, building on its audience every year since its return in 2015 to become the most watched show on ITV2, with millions tuning in every night to observe the islanders antics and scream “I’ve got a text!” to an empty room like a demented budgie.

In this year of the World Cup it became a viable alternative, where gossipy groups come together in real time on social media and analyse the latest goings-on more forensically than VAR could ever hope for.

There is a communal aspect to it, something that has been lost as streaming services steamroll through the delights of enjoying “live” television, which is now usually only reserved for the dull, glibness of “hate-watching” chat shows or award ceremonies. Love Island fever echoes the halcyon days of the first series of Big Brother, the collective excitement of watching Nasty Nick Bateman’s downfall, the Shakespearean tragedy for the jaded generation; now viewers gasp as a pen salesman from Essex attempts to woo professional cockney Danny Dyer’s daughter.

Love Island has become a unifying subject of conversation between flat mates, work colleagues, and mates down the pub or arguing with family around the dinner table. In 2018, asking if you’ve seen the latest episode has become the more inclusive version of “Did you see the match last night?”

There is also, obviously, an easy attraction to the show – it offers an idyllic package holiday for the brain for an hour almost every night, unlike the cavalcade of depressing, labyrinthine prestige dramas (which can feel like slogging through Maths Paper 2 of an evening). Love Island is a sunshiny break, a chance to laugh at the beautiful people. Although even beautiful people have problems.

As it has reached its peak in popularity, this year’s show has been under severe scrutiny. There may have been controversies in previous series, such as Zara Holland being stripped of her Miss Great Britain title after some under-the-covers action with Alex Bowen in season two, but the outrage was reserved for tawdry tabloid stories and ardent fans of reality telly.

This year, whenever resident lothario Adam Collard smirked in the general direction of a girl, a thousand thinkpieces and Twitter threads were born. For a show that is ostensibly an escapist retreat, the zeroing in on the worrying behaviour of Adam and self-proclaimed “good guy” Dr Alex George have highlighted important issues surrounding toxic-masculinity. As Adam tried to make his house-match Rosie Williams believe she was acting irrationally when she confronted him about his demeaning attitude, it became a guide for young women and teens on how to recognise manipulative manoeuvres such as gaslighting and in Dr Alex’s case, how to avoid those men who continually profess that they’re “nice” and are therefore somehow entitled to a relationship.

It also poses serious questions about the attitude of young straight men towards women. In the microcosm of Love Island, bro-code is bible and disappointingly none of the men have attempted to take each other to task when their behaviour was called into question. Women are only trusted in one-on-one scenarios and unlike last year there has been no real concentration on the platonic relationships between the sexes. Once the girls express their opinions or emotions, they then became a problem. Ellie was rounded on by the boys when she flew into a rage with Georgia, Rosie was shunned when she tackled Adam and Laura is a constant source of eye-rolling embarrassment to the lads whenever she becomes emotional – the message being that the women of the villa should be unboxed Barbie dolls waiting to be put into action by their Paco Rabanne scented Kens; anything else is surplus to requirements.

Perhaps its newly acquired audience that now encompasses broadsheet readers and highbrow cultural commentators expect too much from the cheap, dumb fun of a diverting reality television show?

Although, unlike the contestants worried about exposing their flaws, it is through its glaring faults that Love Island has become a true talking point about the evolution of reality television. With its concentration on the body beautiful and celebration of heteronormative relationships, Love Island is not the most progressive of shows. Even after outcry about its lack of diversity in body types, sexuality and race, with Samira Mighty being the only black female contestant (whose burgeoning relationship with Frankie Foster was curiously edited from the show), the producers, instead of embracing the audiences wishes, have doubled down on their decision to leave the show in its current generic state. Perhaps its newly acquired audience that now encompasses broadsheet readers and highbrow cultural commentators expect too much from the cheap, dumb fun of a diverting reality television show? Love Island is always going to be a bit Nuts magazine, a bit supermarket own-brand brown sauce – a show that sees people judging each other on the contents of their swimsuits is never going to incorporate the tenets of feminism.

The reality of Love Island is that like most other shows of its ilk, it is a fantasy; it’s an edited version of a structured truth in the mold of Big Brother, which eventually succumbed to an impenetrable darkness in its later years by focusing on creating conflict rather than comedy. There is still a chance though that after its record-breaking success this year, plucky Love Island (with a bit of grafting) could transform into a show that audiences will invest in a long-term relationship with rather than disappearing from viewers memories like an embarrassing summer fling.