Did you know there was an unused theatre under Busáras?

The lost theatres of Dublin revealed 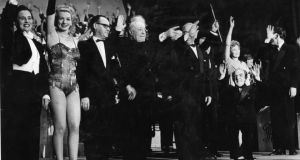 End of an era: Jimmy O’Dea points to the audience as the final curtain falls at the Theatre Royal in Dublin, in 1962. Photograph: Gordon Standing

Video may have killed the radio star, and streaming may or may not be making cinemas change their tune – see the gorgeous-looking new Stella Theatre in Rathmines, for example – but what about theatres?

Consider this: the Bord Gáis Energy Theatre seats “just” 2,111, with the Gaiety a close runner-up, at 2,000. But the third incarnation of the Theatre Royal, which once stood on Hawkins Street, seated 3,700, and there was room for more to stand – which they did for the likes of George Formby, Danny Kaye and Nat King Cole. Judy Garland came in 1951 and sold out a series of shows. It’s said the crowds that came to see her were surpassed in Ireland only by those for JFK and Pope John Paul II.

Roy Rogers arrived with Trigger, “the smartest horse in the movies”, while Gene Autry also appeared on stage with Champion the Wonder Horse. Going to the theatre was a different experience back then, and horses featured surprisingly frequently. In fact the original Theatre Royal, on Smock Alley, could accommodate pony racing on an oval runway over the orchestra pit.

The successive versions of the Theatre Royal on Hawkins Street were wonderful affairs. The first was a Palladian extravaganza, built on what had been a meat market. Philip B Ryan’s absorbing book The Lost Theatres of Dublin, from 1998, is filled with tales of the Queen’s Theatre, on Pearse Street, the Coliseum, on Henry Street, the Torch, on Capel Street, and the Capitol, on North Prince’s Street. There are stories of actors, intrigues and fascinating morsels of information. When the second Hawkins Street Theatre Royal was demolished, for example – the first burned to the ground in an accident with a gas lamp at a matinee – the grand old marble staircase, designed by the theatre’s architect, Frank Matcham, was moved to the Brown Thomas department store, on Grafton Street. You can still see it in what is now Marks & Spencer. John Redmond, creative director at Brown Thomas, says that some of the chandeliers were saved for Brown Thomas, too.

Another intriguing insight from Ryan’s book is that although schoolchildren are brought up on the story of the riots that followed the opening night of JM Synge’s The Playboy of the Western World at the Abbey in 1907, riots were a relatively common way of showing disapproval at a show.

Although the Theatres Royal on Hawkins Street have been erased from Dublin’s landscape, physically at least, other theatres have been repurposed. Out of the Box, part of the Dublin’s Culture Connects project, saw the artists Cesca Saunders and Liing Heaney working with the dancer and choreographer Muirne Bloomer to explore the story of the former Oscar Theatre, on Serpentine Avenue in Sandymount, through the holdings of the National Archives of Ireland.

The building now hosts Gurdwara Guru Nanak Darbar, the only Sikh temple in Ireland. It originally opened in 1929, as the Ritz Cinema, and was re-established as the Oscar in 1977 under its general manager, Ronan Wilmot, who described the undertaking to RTÉ at the time as “a very dodgy exercise”. Bloomer had begun her own career as a dancer at the Oscar, when the theatre’s owner, Louis O’Sullivan, offered her an apprenticeship.

There’s something hauntedly evocative about being in an empty theatre, with the bright lights off, the colours faded, and the plush worn thin

The mysteries of old theatres are considerable. In some, metal guttering was used to simulate thunder – just roll a ball down and around. There’s also something hauntedly evocative about being in an empty theatre, with the bright lights off, the colours faded, and the plush worn thin.

Gavin Murphy is another artist who became gripped by the mysteries of lost theatres. In this case it’s the Eblana, dark since 1995. Most people, waiting to catch a coach at Busáras, would be surprised to know that under their feet lies a silent theatre, but Michael Scott’s visionary design for the transport hub included a nightclub on the top floor and a newsreel cinema below.

“I had remembered hearing about a theatre under the bus station in the past,” says Murphy, whose current film and exhibition at the Temple Bar Gallery is an imaginative re-creation of his research into the space. “As a child I’d go to Busáras a lot, to pick up my granny, so I must have been right by it, but I never really knew what it was.”

Via Murphy’s researches Busáras is seen as a symbol of the ambition of the nascent Irish State. Scott’s plans for what was one of the first major postwar public projects in Europe were compromised, almost from the outset. It never became what Murphy describes as “an all-encompassing civic building for all of Ireland. There were plans for a creche, and a barber’s.” Controversies dogged his modernist-style building, and changes in government altered the agenda.

The screening room became a theatre, and it was briefly to become a “women’s labour exchange” before part of the building was given over to the newly formed department of social welfare. What was to have been the nightclub is now the department’s canteen.

The theatre space wasn’t ideal either. In a 2001 interview with this newspaper Phyllis Ryan, whose Gemini Productions operated out of the Eblana, refers to Dubliners’ derogatory remark that the Eblana was “the only public toilet in Dublin with its own theatre”, saying that perhaps, if you could have got to the auditorium without going past the ladies’ loo, it might have made a difference to the company’s fortunes.

Scott worked with Ove Arup on the engineering, and together they enlisted Hope Bagenal, a pioneer of acoustic engineering, to bring the Eblana aurally to life

With the help of the Irish Architecture Foundation, and painstaking research, Murphy uncovered many of the Eblana’s secrets, including Scott’s ambition for the theatre and for Ireland. He worked with Ove Arup on the engineering, and together they enlisted Hope Bagenal, a pioneer of acoustic engineering, to bring the Eblana aurally to life.

Quoting the philosopher Roland Barthes, Murphy’s title Double Movement refers to the romance of architecture: “architecture is always dream and function, expression of a utopia and instrument of a convenience”. Theatre architecture must be some of the most “doubled” of all. Histories of theatres are histories of dreams, drama, escapism and true-life struggles.

The question of whether the buildings soak up the energy of experiences enacted within is another matter, although Murphy concludes his film with scenes of actors moving on stage in an otherwise empty space – ghosts or memories, maybe.

The idea of an empty space, its seats and lighting still intact but steadily decaying, silent under the constant hectic movement of Busáras, is intensely moving. As is the idea of the failed hopes and promises of the new Ireland from which it came. “It’s a promise that was semi-fulfilled, perhaps,” says Murphy.

A blow-by-blow guide to the Easter Rising
10