What Put the Blood: A troublesome Irish version of Racine’s play

If there really is a special place in hell for women who don’t help each other, Andromaque and Hermione have found it 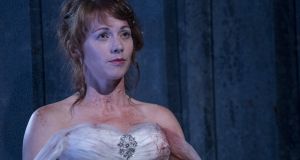 If there really is a special place in hell for women who don’t help each other, then Andromaque and Hermione appear to have found it.

In France Poet’s version of Jean Racine’s Andromaque, first staged in Scotland two years ago under the original title, each famously wronged woman has been transplanted to a sinister, putatively Irish context. Strapped into chairs, side by side, the women speak in turn into twisting microphones, as though trapped in some Beckettian tribunal. But the overall setting – a space with overhanging hooks and blood-streaked plastic curtains – introduced with a pummelling grindcore soundtrack, suggest something closer to a hard rock abattoir.

It’s a visceral set up, if a rather extreme one, suggesting that director and designer Graham McLaren has pushed this reinterpreted tragedy of passion closer to a sectarian slasher movie.

Poet is keen to mark her version with tribal divisions, where a defiant, leather trenchcoat-wearing Andromaque (Julie Rodgers) from the North, speaks first. “I’ll tell it all,” insists Andromaque, “I’ll not tell it pretty.” Lucianne McEvoy, in a bloodied wedding gown, speaks no prettier: “Hermione is the name of me,” she says, with no surrender to English syntax.

Similarly, all the other names have been curiously changed while the broader story remains the same. In Poet’s version, Andromaque is lusted after by her captor, Red who is Hermione’s fiancé. Red’s father, Killer, died shortly after killing Andromaque’s husband, Hammer. Direct, blunt and hard-hitting, those names fit well with the tenor of the play.

There are echoes here of Mark O’Rowe, whose early monologues whipped street-level gangsters up to the level of the mythic. Here, though, Poet uses septic imagery to bring her legends right back down to earth.

If it doesn’t ring true at this proximity, it is less to do with a hardened Andromaque’s vulnerability in protecting her son, Little Hammer, from Red’s menace, or with the iron-clad haughtiness of a Hermione who sneers of her pleading suitor, Shadow: “A real man takes what he wants”.

What seems more implausible is that their monologues would mostly correspond, from Hermione’s jilting to her revenge by proxy. As a metaphor for the Troubles it feels banal, a dull clang of tit-for-tat slaughter, morbid lines from folk song and foreboding images of butchered hogs. Unlike the clichés of the play, the real schism in a divided Ireland was that neither side would ever agree on a version of events.