The pick of this week’s theatre

This week’s theatre highlights all involve stories that need to be heard, and those who are either literally and figuratively deaf to them 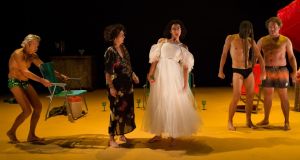 This Beach, an acerbic satire revived from its last outing at the 2016 Dublin Fringe Festival

The family at the centre of Nina Raine’s Tribes, given a sharp and moving production at the Gate Theatre, is cultured and idiosyncratic: part Chekhov play, part Puccini opera, all noise. “If you’re going to argue, slow down,” advises Beth, the mother, and the advice is practical. The youngest of the family, Billy (Alex Nowak), is deaf, struggling to decipher the din created by an implacable academic father (Nick Dunning’s overbearing Christopher), a distracted novelist mother (Fiona Bell’s endearing Beth), a sardonic, aspiring academic brother (Gavin Drea’s tormented Daniel) and a high-strung singer sister (Grainne Keenan’s self-abasing Ruth). When he brings home a new girlfriend, a blaze of red against an otherwise a monochrome design, Clare Dunne’s exceptional performance of a young woman losing her hearing, and slipping between tribes, exposes the rifts in a family almost incapable of listening. Oonagh Murphy directs an absorbing production of a caring but unhappy family, unhappy in its own way.

This Beach
Town Hall Theatre, Galway; and Nov 16-18 Project Arts Centre, Dublin
In a good play everyone is right, wrote the 19th-century dramatist Freidrich Hebbel. But in a Brokentalkers play (two words rarely put together) people can be plain wrong. An acerbic satire revived from its last outing at the 2016 Dublin Fringe Festival, given an amusingly flat delivery on Sabine Dargent’s pleasingly artificial set, This Beach by writer/directors Gary Keegan and Feidlim Cannon, works like a dry parable for the refugee crisis, but it contains a simmering rage. On a private beach, one alarmingly bronzed family try to ignore the bodies that periodically wash ashore. During a wedding, though, one body draws breath, and they keep him around long enough to amplify their hypocrisies – the posturing paterfamilias; an ultra-defensive military man; a hand-wringing ethical consumer. None is more skewered, though, than a gawping artist/documentarian. That might seem like a bitter self-portrait, but the performance really faces outwards, towards an audience aware of calamities but who are content to coast.

Me, Sara
National Opera House, Wexford. 10am and noon, children €6

A few years ago the Abbey initiated its Priming the Canon series, a programme designed to introduce young school audiences to significant Irish dramas as seen through the eyes of their younger characters. Modelled on similar work by Tim Crouch, it has so far proven effective and demystifying, elucidating the hardship of tenement life and the quiet tragedies of The Plough and the Stars in Ali White’s play Me, Mollser, and then of 1930s Donegal and an upbringing among women in Tara McKevitt’s Me, Michael, a primer on Dancing at Lughnasa. Now Dylan Coburn Gray, recent winner of the Verity Bargate Award, draws new attention to Sara Tansey, one of the appreciative cluster of young girls who swoon over celebrity murderer Christy Mahon and his whirlwind romance with local pot girl Pegeen Mike in Playboy of the Western World. Performed by Juliette Crosby and directed by Amy Conroy, it makes Sara the centre of this story, where people create themselves through words, and parents need to listen. Me, Sara is suitable for 5th and 6th-class students and children 10+years. For a detailed teacher’s pack, contact box office.

The Books Quiz: Who wrote the famous line: ‘Hell is – other people!’
8