All the world’s a stage for playwright bursary 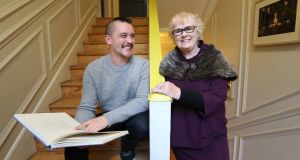 For those with a script idea in the attic, or on the hard drive, now is the time to dust it off and flesh it out quickly. Wednesday November 8th is the deadline for applications for the 3rd Phelim Donlon Playwright’s Bursary and Residency for emerging writers.

The Irish Theatre Institute (ITI) established the award to honour the memory of Phelim Donlon, former drama officer in the Arts Council, who supported many Irish theatre makers.

The bursary picks talent well: last year’s bursary recipient, Dylan Coburn Gray, won the Verity Bargate Award in the UK last week with his play Citysong. The award had over 1,064 submissions this year, and Coburn Gray will receive £7,000 and a chance to produce the play at Soho Theatre in London. The play is described as “a song, a poem, a history, a portrait” of a city and it was presented as part of the LINGO Spoken Word Festival in Dublin in 2015.

Dylan Gray’s first work was written for Dublin Youth Theatre. His play Boys and Girls premiered in Dublin Fringe 2013, winning the Fishamble Best New Writing Award, and nominations for the Stewart Parker Trust Award, and for the Best Theatre Script Award at the Irish Writers’ Guild Awards (Zebbies). He’s also received an Arts Council 16x16 Emerging Artist’s Bursary as part of the 1916 commemoration programme and is collaborating writer with Malaprop Theatre, winners of the 2015 Spirit of Fringe Commission Award for Love+.

Dylan Coburn Gray says that getting last year’s Phelim Donlon Playwright’s Bursary was “a valuable vote of confidence for me, at just the right time. It afforded me the time to write a play I would not otherwise have written, to continue to experiment beyond the bounds of the work I was required to make this year. I think most playwrights feel the tension between getting work out there and writing work which can’t/won’t be staged immediately. Finding some way of doing both is really important if you’re going to continue to grow as a writer, and I couldn’t have done so without the help of everyone at ITI and the Tyrone Guthrie. ”

Applications for this year’s Phelim Donlon Playwright’s Bursary and Residency, open to writers with at least one full length play staged by a recognised professional production company or producer under their belt, close on November 8th and the winner will be announced on 4th December.

ITI’s Co-Director Jane Daly commented “this is probably one of the aspects of Irish Theatre Institute’s work of which we are most proud. Phelim Donlon was a mentor, a producer and theatre manager who supported artists throughout his career and who recognised how difficult it can be to make it in this uncertain business. We, at ITI, in collaboration with Annaghmakerrig, are delighted to support the work of emerging playwrights in Phelim’s memory and to give them support at an important time in their careers.”

The Irish Theatre Institute’s varied support for emerging theatre professionals includes Six in the Attic - office space to work at their Eustace Street base in Temple Bar and professional advice and support. Dylan Coburn Gray is currently working away in that attic.

Their alumni include some of Ireland’s best known theatre creatives, such as Amy Conroy, Emmet Kirwin and Philip McMahon.

Meanwhile the UK’s Bruntwood Prize for Playwriting 2017 shortlist includes Dublin-based Kevin Doyle, who made the final ten out of nearly 2,000 entries.

Kevin Doyle is a playwright and director based in Dublin. He grew up next to a New York prison; he has written 12 plays and screenplays and his work has been translated into French, Romanian, and Swedish. Among his awards in the US and Europe are the the Thornton Wilder Fellowship at The MacDowell Colony and the Rosette Lamont Residency for Emerging Playwrights at Yaddo.

An Irish citizen since 2010, his family originally came from Limerick and Donegal and he lived for a number of years between Antwerp, Belgium and Brooklyn, New York, before settling in Dublin earlier this year. His plays have been produced in Europe, Canada and the US. when after all it was you and me (or - the genocide play), which was shortlisted for the Bruntwood Prize, uses humour and horror to present the UN as a restaurant where all political negotiations happen upstairs and the repercussions are played out below.

The 10 shortlisted scripts were selected from 1,898 original plays submitted for the Bruntwood this year. Each playwright enters under a pseudonym, so writers of any background and experience can enter. The prize fund is £40,000 and each of the winners works with the Royal Exchange Theatre in Manchester, a partner in the award with family-owned property company Bruntwood. The winner is announced on November 13th.