'Women are very vulnerable in this industry' 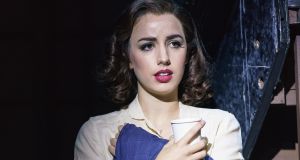 Molly Lynch: 'Of course, I had a plane-load of people coming over from Ireland to see me – my family, cousins, second cousins, you name it.'

Irish actor Molly Lynch won one of the best female roles in musical theatre, in part because, “I’m very annoying,” she says.

What she deems annoying, however, might be referred to more positively by others as ambition, determination and smarts.

While being understudy to the Welsh opera singer Katherine Jenkins at the English National Opera, the Cork actor had one guaranteed performance while Jenkins took time out to perform in Dubai.

“Of course, I had a plane-load of people coming over from Ireland to see me – my family, cousins, second cousins, you name it! But I also got on to a lot of casting directors and there was one, David Grindrod, who I really wanted to come,” she tells The Irish Times.

At the time, Grindrod was casting for a new run of Andrew Lloyd-Webber’s Sunset Boulevard, which comes to the Bord Gáis Energy Theatre in Dublin later this month, and Lynch had her sights set on one of the lead roles, Betty Schaefer.

She picked up the phone to Grindrod herself and insisted that he come and see her step into Katherine Jenkins’ shoes that night at the National Opera. He did and he clearly liked what he saw, because the next day Lynch’s agent told her that she would be auditioning for the part of Betty.

“I had thought they were going to go for a star, someone with a profile, so I was just really lucky that he came and then brought me in. I just did a few auditions and it worked out. It’s just one of those times where it worked out,” she says with a grin.

Growing up in the Frankfield area of Douglas in Cork city, Lynch says she did not have “stagey parents”, but her paternal grandfather Pat Lynch was a star of the showband era with The Airchords and her mother’s father Con McGowan was an opera singer, so it was no big surprise to them that their daughter was drawn to the world of showbusiness.

“My parents wanted me to do a ‘real’ degree. They said, ‘No you can’t work in musical theatre. That’s not a real thing!’ So I compromised and I did a degree in music. I promised my dad I’d go and get a proper job after that, so this is my proper job,” she laughs.

It is just over three years since the 26-year-old packed her bags for London to study at the Royal Central School of Speech and Drama. Since then she has been in Sweeney Todd and Fiddler on the Roof, but Sunset Boulevard is her “first proper grown-up part” and will see her perform in Dublin for the first time.

Her character Betty, an aspiring screenwriter in Hollywood in the 1950s, is the hope and light of what is a very dark production and Lynch says that working in an industry that can be “toxic and negative” and “very difficult for women”, is something she can relate to.

“She [Betty] still believes in the art of writing a good script and that’s what I go back to whenever I’m struggling. I really believe in the art itself. That sounds really up my own arse but I honestly do believe in the core of what I love,” she laughs.

Lynch laughs a lot during our interview. Her Sunset Boulevard co-star Danny Mac describes her as “a strong minded and powerful woman”. She is friendly, funny and open in person, but when the conversation turns to feminism and sexism in the acting world, you get a sense of Mac’s description of her.

“I’ve never had anyone say anything disrespectful but there are times when you walk in and you’re not acknowledged in the room. You can feel so vulnerable and stupid, standing there in your dress and heels. You’re standing there just kind of cringing thinking, ‘oh my God I’m so out there, I’m so exposed’, it can make me really uncomfortable,” she says.

How will the acting industry be impacted by things like the Harvey Weinstein revelations and closer to home, the Waking the Feminists movement and women coming forward to speak about sexism in Irish theatre? “If anything good can come of this, it’s that we can start making it clear what is acceptable and what isn’t,” she says.

In Sunset Boulevard, Lynch gets to work with one of her idols, the Welsh actor Ria Jones, who plays the lead role of Norma Desmond and from whom she has vowed to learn as much as she can “every second of the day, because she is amazing”.

Now aged 50, Jones is entering the stage when decent roles for women in musical theatre dry up dramatically.

“I read this piece with Meryl Streep recently about just that, parts dwindling for older actresses, and it’s true. It’s the same in theatre as it is in film,” Jones says.

“I was thinking about how many roles there are for, say, women aged 50-plus. There are so few compared to how many there are for 20- and 30-year-old women,” she says.

Actor’s voices change as they age and it can be more difficult to hit the high notes. The solution to that is simple, says Jones – write decent parts for older women into new musicals.

“I think it must be Sunset Boulevard that was the last one. You could say Madame Morrible in Wicked, but she doesn’t get to sing that much at all. As a main role, there just aren’t any, so get writing!” she says.

What wisdom might Molly Lynch gain from her mentor? “Know your ‘castability’,” says Jones, who waited 26 years to play Norma Desmond, her dream role. “Know the parts you’re right for because otherwise you’ll go through your career being disappointed that you’re not getting the ones that you think you should be playing. As long as you know the right roles for you, I think you won’t be disappointed.”

Keep on “annoying” those casting directors, might be another one too.