After Weinstein was outed, I made a list of every man who had harassed or assaulted me 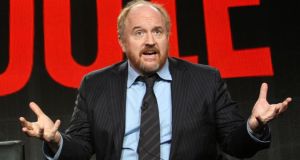 Louis CK: ‘Since I was a little kid, I loved Woody Allen.’ Photograph: Reuters/David McNew

Soon after Harvey Weinstein was first outed as a sexual predator, I created a document titled “Creeps” in which I tried to list every man who had sexually harassed or assaulted me.

It’s a companion to the running inventory that I keep in my head of the male filmmakers, in Hollywood and out, whose work degrades or disdains women.

This is another kind of cinematic canon, one that includes directors I loathe and those I otherwise sometimes admire, however reluctantly. I imagine that a lot of women who love movies even when the movies don’t love us back have their own such lists.

One fallacy about criticism is that it can be practiced objectively, as if we could see and write about movies from some sort of out-of-body experience. As if it were possible for me to watch a movie in which women are abused for no apparent reason — without even a pretense of narrative rationale — and view this exploitation as simply another formal attribute, like the cinematography, soundtrack or superb camerawork.

I’ve watched a lot of movies with really excellent camerawork from male directors who treat women on screen like garbage.

And then there’s the peculiar and ugly case of Louis CK, whose forthcoming movie, I Love You, Daddy, was recently yanked by its distributor.

I don’t feel bad for him or mourn a career that may be over. He’s rich and can crawl into a cushy hole, where he should follow his own advice and listen, namely to women who have been silenced by men who are free to say — and do — what they want.

It made me laugh, at times uncomfortably, but part of its power was that it also seemed confessional

This freedom is at the center of I Love You, Daddy, which now serves as the last will and testament for at least Louis CK’s career to date.

I first saw the movie in September at the Toronto International Film Festival. As a catalog of male pathology, it made me laugh, at times uncomfortably, but part of its power was that it also seemed confessional.

The history of cinema is also a history of the exploitation of women, and here was a male director seemingly grappling with this.

As I wrote then: “Cinema has long served as a vehicle for male onanism, a space in which male fantasies about sexual power over women are expressed on screen and enacted behind the camera.”

I Love You, Daddy is a compendium of such male fantasies. It centres on a successful television director, Glen (Louis CK), in the midst of myriad crises. He’s incapable of parenting his 17-year-old daughter, China (Chloë Grace Moretz), and caves to her every wish. (“Can I take the jet?”)

He’s similarly thwarted at work. He’s signed up to create a new TV show but is creatively stuck, to the exasperation of his producing partner, Paula (Edie Falco). Meanwhile, he has fired one actress and hired another, Grace (Rose Byrne), and they start sleeping together. She introduces Glen to his idol, a pompous, 68-year-old filmmaker named Leslie (John Malkovich), who, as someone says, “likes young girls.”

A lot happens in the movie, which repeatedly circles back to the question of whether it’s possible to separate the artist from the art, a question that some are asking now of Louis CK. For Glen, this takes on extra urgency when China begins an undefined relationship with Leslie, who showers her with attention, shopping with her and sweeping her off to Paris.

The first time they talk at length, Leslie even defines radical feminism for China, a scene that mirrors another in which Glen delivers a more generalised feminist lesson. Men explaining equality to a young woman is one provocation; another is that Grace defends sexual relations between teenage girls and adult men.

The other sustained provocation is that I Love You, Daddy is partly about the Woody Allen Problem. The film’s black-and-white cinematography is an obvious reference to Allen’s oft-celebrated 1979 film Manhattan, in which he plays a comedy writer having an affair with a 17-year-old girl.

The title I Love You, Daddy refers to China’s repeated declaration to Glen, but it also seems like a nod at Allen’s expansive influence on comedy.

Louis CK himself has been compared to Allen, and he appeared in Allen’s 2013 drama Blue Jasmine. “He’s a very big deal in my life,” Louis C.K. said of being cast in that movie. “Since I was a little kid, I loved Woody Allen.”

Has that love soured? Did it sour in 2014, when Allen was accused by his daughter, Dylan Farrow, of sexually molesting her? However starkly confessional I Love You, Daddy sometimes registers as, it can also be seen as an act of symbolic patricide, a way of addressing a tarnished idol.

Shortly before it ends, China turns 18 and offers herself to Leslie, who for the first time seems uninterested in her. Perhaps that’s meant to suggest that he doesn’t actually seduce girls or that China, at 18, is now too old for him. Your interpretation may vary, though it’s worth noting that Leslie later enthuses about how wonderful it is to be “loved by a girl and then be rejected by the woman she becomes”.

I do a lot of terrible things, but I can also make one of these

The line reminds me of one that Allen’s character, Isaac, tells the now 18-year-old former girlfriend, Tracy (Mariel Hemingway), toward the end of Manhattan: “I just don’t want that thing I like about you to change.”

It’s unclear what he means (her beauty, her youth), though earlier Isaac tells Tracy — after passionately kissing her while they’re out one night in a horse-drawn carriage — that she’s “God’s answer to Job” and “would have ended all argument between them.” God, Isaac says while pointing a finger at Tracy, would have said, “I do a lot of terrible things, but I can also make one of these.”

I was 18 when I saw Manhattan and I despised it because I knew that its reveries were built on a lie that few adults, including film critics, seemed willing to acknowledge. Perhaps that’s partly why I appreciated I Love You, Daddy the first time I saw it. Louis CK seemed to be pointing at Allen with a queasy homage that was getting at the truth of Manhattan even as I Love You, Daddy circled — and circled — its own creator’s complicity in female exploitation.

The two ideas converge late in the film when Glen meets Leslie, who reveals that he hasn’t seen China in a long time. That’s when Leslie dreamily shares his philosophy about loving girls only to be rejected by the women they become.

It’s an unnerving scene, one that doubtless speaks to how some men view women, but it also speaks, I think, to how the movies see women. How they use and use up young women, at least until they turn 18 or 20 or so when some moviemaker or some suit deems her no longer desirable and turns her putative lack of desirability on her, as if she were responsible for this lack of interest in her.

When I watched I Love You, Daddy a second time, the jokes no longer landed; its shocks felt uglier, cruder. But for once a filmmaker seemed to be admitting to the misogyny that we know is always there and has often been denied or simply waved off, at times in the name of art.

The revelations about Louis CK and others are killing any pretence that any of this is objective. It’s very personal, and it always has been.